As you are probably aware, a ring of 12+1 was installed in Singapore in August of last year. This was a particularly significant event, as there is little or no tradition of change ringing in Asia. Enormous credit must go to Andrew Reynolds, the Taylor's team and all involved in this project. The ring is a 25 cwt 12 with a flat 6 (which creates a “front eight” consisting of 2 to 9 with the flat 6, as well as the “back six” consisting of 5 to 12), and there's also a dumb bell.

Creating the ring is however just the first step – someone then has to ring the bells. There were numerous ringers from overseas for the opening, nearly all of whom stayed to help with some initial training. Since then a number of ART teachers have visited for quite long periods, including Linda Garton and John Loveless, Marjorie and Alan Winter; and at the time of writing, Helen and Peter McGregor have just arrived there.

My own stint was for three weeks leading up to important services on 12th and 13th December, part of Singapore's bicentennial celebrations, at which the bells were to be rung. The Prime Minister was one of the many dignitaries attending the Friday service, and he made a specific request for a private and informal visit to the ringing-chamber and the bell-chamber before the service. It was indeed very informal, despite the presence of his bodyguards, and he might well make a future ringer (though he's currently a bit tied up in his day job).

A few days before the main event we were visited by a Chinese-language news crew. They were remarkably well-informed, polite and efficient – a pleasant change from some news crews! The video clip that they produced for their on-line readership may be seen at (preceded by the inevitable advertisement):

Given the inexperience of the band, we decided to ring rounds for the comparatively brief timeslots allocated before the start of each of the bicentennial services. We practised ringing on the front 6, then the front 8. Striking progressively improved, with the band learning to cope with the increasingly rare occasions when a bell went wildly out, and to detect and correct the more subtle inaccuracies without prompting. The first ever service ringing by a local band was on Sunday 1st December, and it went so well that we decided to tackle the heavier bells and ring the back 10 for the bicentenary.

A goal of ringing rounds made planning the lessons reasonably straightforward. They involved individual and small group sessions on handling (including teaching two brand-new beginners), while the evening sessions with the larger group concentrated more on the upcoming service ringing. We did though have some time for the usual exercises than any ART teacher would use to bring ringers who can handle competently towards the stage of plain hunting: exercises such as Kaleidoscope, Call Changes and Mexican Wave.

This process emphasised the difficulty of training a band almost all of whom are beginners. The early stages of one-on-one lessons to achieve safe handling and Learning the Ropes Level 1 are pretty much the same as for any new ringers, but the following stages of progressing even to rounds, let alone moving towards Plain Hunt, are very much more difficult than usual. We are so used to introducing new ringers one at a time into an existing band when they first ring rounds that we tend to assume that this is how it is always done. Likewise teaching someone to lead or to cover is something we usually introduce with just one learner at a time joining a more experienced band. So, while more than half the band is at the stage of easily passing the handling assessment at Learning the Ropes Level 2, the difficulty is more with gaining the necessary experience to tackle plain hunting. This will indeed be a major hurdle for this band, and any assistance that any visiting ART teachers can offer will be welcome and appreciated by this very enthusiastic young band. Anyone wishing to visit should contact the cathedral ringing authorities well in advance at bellringingministry@cathedral.org.sg and should be aware of their policy: “The Cathedral’s bell-ringing ministry is an integral part of the worship ministry of the church, where the bells are sounded in praise to God and proclamation of His glory. The Cathedral team attends to this ministry in all seriousness and good cheer. The Cathedral welcomes Christians to ring at her bell tower for this purpose of worship. Anyone wishing to ring at the tower should already be a competent ringer and must be prepared to lend a hand with practices. They should not be tower-grabbers but be able and willing to help coach the young team of ringers; teaching should be closely attuned to the philosophy of the Association of Ringing Teachers.” 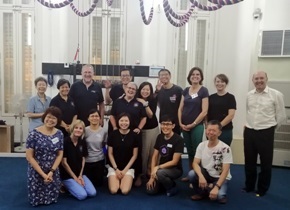 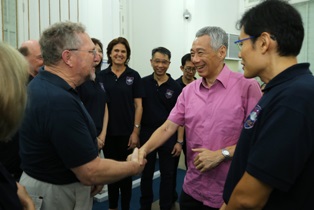