All I wanted was one recruit, so I could gain my ART M1 accreditation. I’ve ended up training two bands from scratch and becoming the Association General Secretary.

This is how it started …

I needed a willing pupil so over lunch it was suggested we should hold a taster session to recruit for Ringing Remembers. I found myself live on radio a couple of weeks later and that afternoon a group of potential recruits turned up. One lived close to me, Mary, you all know Mary, she recruits others, has great ideas and writes a Blog. In February she hadn’t started any of that, she was just trying to nose-about in the ringing chamber of St Peter Mancroft to search for the names of her relatives on the impressive peal boards. Mancroft Ringing Discovery Centre as it is now was a building site, therefore Mary first rang at St Giles and was not going up any more stairs to look at bells.

From that first taster session there was now a group of Ringing Remembers recruits starting out in Norwich, with Catherine and Steve spending all their spare time teaching. Meanwhile Mary had enthused the Reedham WI to take up ringing and for the first time in decades there was talk of a band at Reedham. Over at Hickling, Jo – and what seemed like the rest of Hickling – were looking at getting Hickling ringing for the first time in decades. Two further taster session and lots more recruits.

The South Walsham band are a lively bunch and a further M1 day course gave us a few more ART-trained teachers. Bribed with tea and cake, these new ART teachers brought the two bands of Hickling and Reedham together to became one and around 20 were now training using the Learning the Ropes scheme and South Walsham bells; Hickling tenor weighing 20cwt.

I had time on my hands, having been made redundant from my job of 35 years, and was playing with the idea of some employment, so I asked our Association President if he’d write a reference for me. This was a mistake: he can be very persuasive even in a short text message. While I was away on a pub crawl in London I became the Norwich Diocesan Association Secretary.

The Association hadn’t held its Striking Competition for about five years as it seemed no one wanted one.South Walsham has good facilities: ground floor ring, beautiful churchyard with second church which is good for events. I had already been asked if South Walsham was available to host a competition and do a tea, so it was in my diary and then I discovered it was the same day as the Standing Committee meeting – time to combine the two events.

The Norwich Ringing Remembers recruits were challenged to come and ring rounds at the striking competition. They looked scared. It got renamed as a Ringing Festival – cake and 50 Ringing Things were mentioned and there you have a whole host of enthusiastic ringers. More novice bands stepped forward and, on the day, we had a total of 15 bands ringing with 5 in the novice section. A splendid tea was provided by the Reedham WI. A new novice trophy was fashioned from a broken Mancroft stay. Felmingham were worthy winners but I did notice that there was a South Walsham trained ringer in that band!

Those that say they don’t like a competition missed out on a delightful sunny afternoon spent with good company and there were generous prizes awarded that had been donated by The Ship. Many of us spent a pleasant evening celebrating and spending the winner’s vouchers. 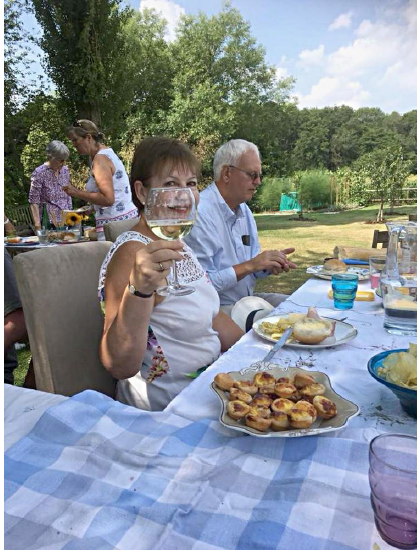