Simulators are for more than silent practices

We already had a simulator system set up in our tower at Lytchett Matravers, but essentially only used it for running ‘silent’ training courses so as not to annoy our nearest neighbours.

I attended the Abel Simulator Workshop at Bryanston in Dorset in January 2019. The tutor was Roger Booth. My main aim of attending the course was to learn how to set-up and use our simulator to its fullest extent. Roger showed us how to set up a multi-workstation system, but due to lack of space and equipment resources we were never going to be able to set up something similar in our tower. I had visions of being able to use our system to run monthly timed simulator sessions for our relatively novice band, either one or two ringers at a time, using our one existing laptop. However, I did come away with lots of ideas and things to try out.

With this in mind, I organised a session in our tower on 18 July with Alan Bentley (who set up the simulator system initially), and Debbie Phipps (Tower Captain). The main purpose was to familiarise ourselves with the equipment set-up and ‘bell-mapping’ options for different exercises. We only needed to silence two of our six bells. It was an extremely useful session and we practiced some of the basic exercises i.e. shadowing, following, rounds, leading, and Alan Bentley’s exercise ‘I’m sorry I haven’t a clue’ – this is now a recognised exercise that is in the ‘Teaching with Simulators’ book written by Roger Booth.

Next we ran a simulator session for five members of our Band on 25 July. We silenced three of our bells and ringers practised most of the learning exercises above, concentrating on listening and good striking.

Once everyone is more familiar with ringing using the simulator, we hope to move onto other more complicated exercises, as well as individual practice of Plain Hunt, Plain Bob Doubles etc. However, this will all have to wait as our bells are coming out at the end of August to be restored. 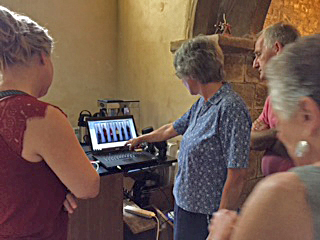