Wall to wall blue skies and sunshine for the whole day brought out the beauty of the surroundings as a backdrop to this archetypal village church, and village, nestling in the folds of the Brecon Beacons National park in South Powys. So much so that several of those present rather wished we might have had an outdoors course since, inside the church itself, as with all of its similar kind of medieval heavy, stone construction, it was still harbouring a winter’s chill. The sunshine had made the contrast seem all the greater.

The course, for 10 trainees, was the first part of the process designed to enable reasonably experienced ringers to be able to teach complete newcomers and novices the skills to ring safely and competently. Like all things in ringing it sounds straightforward enough but in reality is quite complex. That is why the formation of the Association of Ringing Teachers (ART), has made such progress in instruction and education of ringers over the relatively short period of 10 years, from a position where previously, even after some 400 years of church bell ringing, there was no structured or universally agreed basis for the teaching of ringing at all. The teaching and consequently the learning process has now been co-ordinated and integrated by ART into the modular teacher training courses and the Learning the Ropes progression for new ringers.

The course at Llanbedr was run by David Sparling from Essex. A good distance to travel but his week-end was also happily spent staying with very good, longstanding friends, David and Laura Childs of Builth Wells, not too far away. From the point of view of the members attending it was a real bonus to have such a well versed and experienced teacher and instructor. David Childs, incidentally, is our Swansea and Brecon Guild Training Officer and Laura, the Guild secretary.

The day was structured between the village hall for talks, morning coffee and afternoon teas, the church for ringing, and the village pub, the Red Lion for lunch, all within a 100 yard stroll; ideal? Idyllic!

M1 is the first module for would-be teachers, with instruction in the introduction to ringing, including safety, leading on to the teaching of the basic aspects of bell handling. My personal observation is that it makes one look all that more closely at one’s own inadequacies too, but education was ever thus. The nice thing about David Sparling’s approach, and that of ART, is that it is wholly inclusive and there was never any sense of judgement or criticism throughout the course. As with all aspects of ringing, a course should be, and needs to be, fun, engaging and full of interest, and that this certainly was.

Following the conclusion of the course itself, as is generally the case with ringers after any event, there was an opportunity to have a good session of general ringing combined with a dedicated touch to our own Vicar, Rev’d Rana Khan. Rev’d Rana was presented with the Hubert Walter Award for Reconciliation and Interfaith Cooperation by Archbishop Justin Welby at a ceremony recently at Lambeth Palace.

A week later as the crisp sun again shone on Crug Hywel, Table Mountain top image, and there appear to be near blizzard conditions outside as I write, our Church was a much warmer place than had seemed previously, for all these reasons. 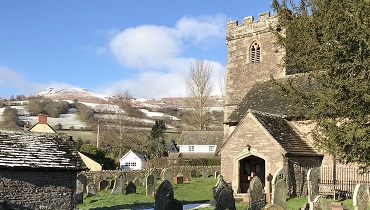 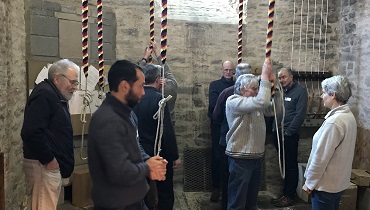 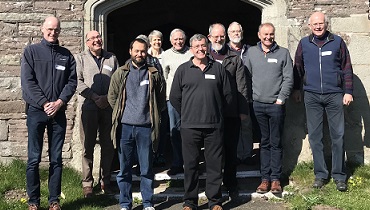