When the new band at Mildenhall, Suffolk, where I help to teach, started to recruit a new wave of ringers, I knew something had to be done to enable them to become an independent, teaching band, rather than a band which was being taught. When I put this problem to Pip Penney of ART, she immediately responded in a positive way, and encouraged me to go ahead and organise an ITTS Module 1 Day Course. This took place on Saturday 27 April at Mildenhall and was attended by 22 people, of whom eight were mentors and the rest trainee teachers. While most of the attendees were from Suffolk, three were from neighbouring Cambridgeshire and one a bit further afield from St Albans.

Graham Nabb of the Association of Ringing Teachers was the ITTS Day Course tutor and engaged the whole group with a lively and professional delivery in both practical and theoretical sessions, which gave everybody a great deal to think about. It was challenging to analyse the common and stubborn faults we encounter as teachers and how we address them, and it definitely pushed some of the trainee teachers to the edge of their comfort zone to try and rectify our ‘deliberate’ mistakes.

It was a long day but full of informative and practical help, and it was good to be able to devote so much time to this essential part of ringing which is so often time-starved and carried out in isolation. One immediate, positive outcome from the day was the opportunity to make links with fellow ringers in Cambridgeshire, with whom we will organise future teaching events.

It’s easy to be carried along on a wave of enthusiasm after such a day, but Graham really did make it seem easy – at least, if not easy, then not such a mountainous task. It actually felt like teaching someone to ring without them developing bad habits or glossing over mistakes, and still retaining their motivation was achievable. It might even be fun!

If you think the scheme is not relevant to you – or you have been led to believe it isn’t – or you have heard about it but think it’s not for you, think again. It’s actually for everyone. In fact, I would say the future of ringing quite possibly depends on it and YOU very definitely have a part to play in that. 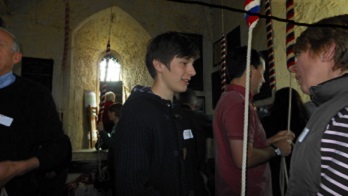