CUGCR ring in and around the city of Cambridge; mostly at the towers of Great St Mary’s, St Andrew the Great, and St Benet’s.

CUGCR offers activities to ringers of all abilities, from those having their very first try to those with years of experience. These include taster sessions, lessons for beginners, practice nights, service ringing, peals and quarter peals, and even handbell ringing – and that’s not to mention all our social activities!

The society itself is 139 years old and has always had a strong presence in Cambridge. However, the boosted efforts to attract and teach new ringers is a far more recent development and was started in 2016 by the guild master at the time.

CUGCR has a diverse membership: just over 20 students lie at the core who meet and ring regularly. Academic staff and graduates who live locally also ring regularly with us, and we also stay in touch with alumni across the country who join us on our annual dinner day. This term we ran a teaching programme which saw 10 teachers give lessons to a total of 24 keen beginners, of whom 10 were still ringing with us at the end of the term (as well as 4 who expressed an interest in the final two weeks and wish to continue in the new year).

The bulk of our active members are students in Cambridge, so we are mostly in the 18-25 age bracket.

Our weekly practice nights happen every Thursday and Friday, with additional service ringing taking place on Sunday morning and afternoon. Throughout this term we were able to offer lessons for new ringers every Thursday, Friday, and Sunday.

We enjoy our close links with the Society of Cambridge Youths, with whom we share one of our towers and ring with regularly. Our friendly relations with the Youths help us at both ends of the ringing spectrum; as well as sometimes assisting us with our teaching, students wishing to progress their twelve-bell ringing are always warmly welcomed at their weekly practices. Around seven of the current student guild regularly attend Youths’ practices.

We have come a long way since setting out to make CUGCR a place where learners can really get involved in ringing for the first time and feel welcome in the ringing community. We can now proudly say that several of our most active members are students who learned with us. We recognise that the recruitment of new ringers is essential to sustain the large and vibrant community of student ringers Cambridge has had for many years. To this end we are thrilled with the record number of students who came for lessons with us in 2018 and are motivated to continue these efforts into 2019 and beyond.

In 2016, our guild master at the time set out to make CUGCR into a university society which can be enjoyed the fullest by ringers of all abilities. The most prominent area in need of improvement was the teaching of new ringers, and so in each year since, a guild member has devoted themselves to coordinating and organising lessons. In the first two years, this role was performed unofficially, however this year at our AGM we affirmed our commitment to this goal by voting to create a sixth position on the guild committee: the teaching officer. The new position was promptly filled by a ringer who was themselves part of that first cohort of learners in 2016, a testament to the success of our endeavours so far. Having our teaching officer be someone who themselves learned with the guild has had several benefits:

Their experience as a learner helped inform how we approached teaching differently this year.

This fact proved to prospective ringers that, despite seeming difficult at first, ringing is a skill that can be picked up well within the timespan of a university degree, thus dispelling concerns people may have had about joining the guild as absolute beginners.

While the teaching officer came to lessons to teach ringing theory through handbells, and also assist with following exercises, they did not themselves teach handling to absolute beginners (which often formed the bulk of lessons for most learners). We have come to view this as a strength rather than a drawback: it reinforces that the teaching officer’s role is predominantly in organising and promoting lessons, thus taking responsibility off other teachers so they may more easily devote their spare time!

Our teaching campaign kicked off at the fresher’s fair in October, where we once again hired the Charmborough Ring, a mini ring of six bells which we use to give two-minute tasters to hundreds of the fair’s attendees over the course of two days. The Charmborough Ring gives a clear and exciting snapshot of what we do to people who perhaps have never even heard of change ringing before. This year we really captured the imagination of the student body in Cambridge – 130 students signed up to our learner’s mailing list, and a cheeky cartoon inspired by the ring was even published in student magazine The Porter’s Log, which was widely shared among Cambridge students on Facebook. This year we offered two have-a-go sessions in the first weekend of term, as opposed to just one as in previous years, in order to ensure as many people as possible were able to come for a first taste of ringing. The 20 who attended across both sessions were each given their first go on tower bells, as well as a few fun exercises on handbells. The attendees also had a tour of the tower, including seeing the bells, the spectacular view from the top, and the opportunity to ask questions and chat with the guild master.

After these sessions we opened up registration for our programme of lessons. Learners were able to attend up to three lessons each week: Thursday and Friday evening (before our usual guild practices), and also Sunday afternoon (before evensong ringing). The success of our recruitment efforts, as well as the flexibility of the programme on offer, meant the response we received to this was overwhelming - before the first lesson had even began, we had every single lesson on offer signed up to maximum capacity, with more keen learners getting in touch to ask when more lessons would be on offer! Thankfully we worked to expand the capacity of the Thursday and Sunday sessions such that everybody interested was able to come. Running so many lessons for a sustained period of time may seem like a big commitment for our volunteering teachers, however the positive atmosphere at each session and the excitement that comes with sharing our hobby with new ringers meant we were enjoying the lessons just as much as our learners! The programme has been a huge success – going into the Christmas holidays we have ten learners still ringing with us. By scheduling lessons to take place directly before our regular practices, our learners have also been ringing alongside the rest of the guild - most are now able to ring rounds on 6 (with some call changes), and two are even ringing plain hunt - the simulator has been extremely helpful for this, as it means some learners can be ringing as part of a band while other learners are still being taught handling. After the final lesson of the term, some learners even joined in with rounds and call changes on 12 at evensong ringing. We’ve also found handbells are a fantastic medium for learners to ring alongside more experienced ringers.

Making this transition from just being a learner to joining in with the rest of guild is something we’ve found difficult in previous years, and so we’re thrilled it’s happened so quickly and seamlessly this year. Much of this has been to the credit of our (unofficial) anti-curry officer, whose job it is to organise socials (which do not involve going out for a curry - that very important job is left to our, also unofficial, curry officer). Alongside our teaching, there have been dinners, games nights, pub trips, a cycle outing, and a Christmas party, which have all been well attending by our learners, who already feel part of the community of student ringers in Cambridge. These social activities have also helped welcome those who could already ring upon arrival at university - in particular our fresher’s dinner in October. Retention of such ringers is also helped by the breadth of the practice sessions we offer – with practices at so many different times in the week, students are able to integrate ringing into their busy schedule with ease. Moreover, the variation between different sessions also helps meet the range of abilities: for example, the Friday evening session is very popular with people who have learned more recently (perhaps with the guild), whereas on Thursday we often ring quite advanced methods (although many ringers like to attend both of these sessions every week!)

Even though some of our learners are now joining regular practices, we would like to continue to have teaching sessions next term so that our many learners wishing to continue may all do so in the environment that suits them best. This will kick off in the first week of term in January with a “ringing bootcamp”, where we will be reinforcing and building on the skills already learned in a number of sessions concentrated in a single week. Towards the end of term, some learners will be ringing their first quarter peal on our annual dinner day (as was the case in this year and last year). The focus will then turn to having more of our experienced guild members attend ART modules ready for next year – some of our membership have already attended such courses but increasing our pool of trained teachers is vital if we wish to continue to expand our teaching programme in the years to come, as well as improve its effectiveness.

One unexpected side effect of our recruitment aims has been how international the guild’s membership has become. Change ringing is an activity practiced almost exclusively in Britain, yet among the 24 who had lessons with us this term we had students from Hungary, Hong Kong, USA, Lithuania, Germany, China, and Singapore. One rather exciting prospect from our efforts is the potential for word about ringing to spread beyond the British Isles and spark an interest elsewhere in the world. In addition to this, in encouraging the members we already had to give teaching a go, we hope they will be ready to teach others across the country in the many years to come after they graduate.

Ringing on handbells continues to become an ever more popular activity across the guild. When one teaching session had to be cancelled, all guild members were invited to attend a handbell workshop in its place, where we saw both new and experienced ringers ring plain bob minor on handbells for the first time. Several students have been pursuing this further, and self-organising practice sessions in small groups with a view to ringing quarter peals in the near future. We have recently put forward to the guild a plan to renovate our handbells in 2019, which we hope will enable this further.

In summary, the main areas in which progress has been made in 2018 are: 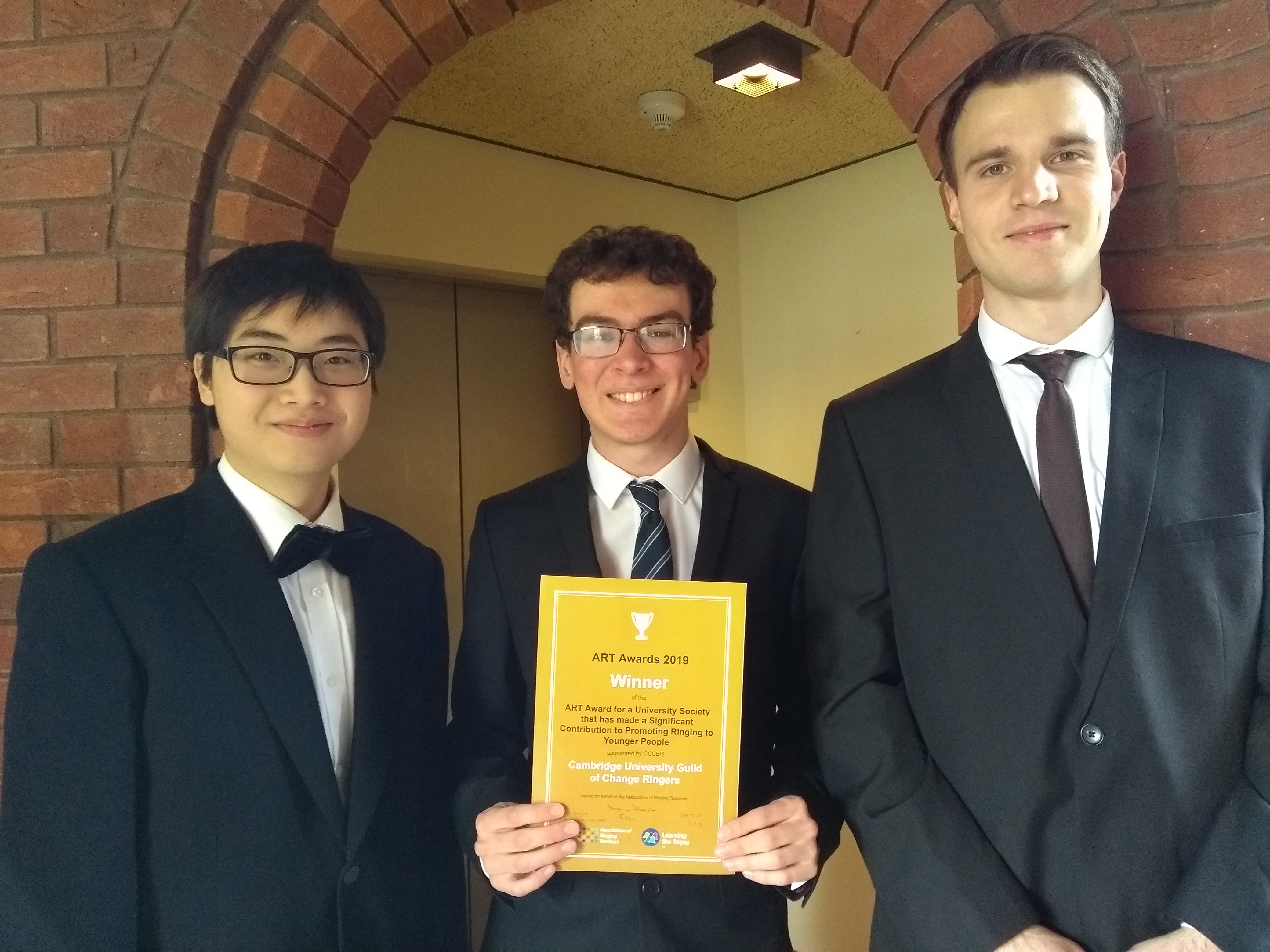