Jane Grellier rings at Bicknoller, Somerset, and has been ringing for about 9 years.

During 2019 Jane has achieved Learning the Ropes Level 5 (29th September,) her Silver award in 50 Ringing Things, and has attended ART Modules 1 and 2F. She was awarded the Dunster Branch ‘Achiever of the Year’ award at the AGM in October. She has been a very reliable and useful helper at Branch training courses and improvers practices throughout the year.

During the last year Jane has progressed her own ringing significantly as well as inspiring others. She has organised tower outings and recruitment activities and helped with teaching, both at her tower and within the wider Dunster Branch. She completed Level 5 of Learning the Ropes in September, being only the 2nd ringer in the branch to do so.

Jane has organised several ringing outings, a recruitment event and numerous social events for her tower. She submitted a successful grant application to the Bath and Wells Association for installation of a simulator at Bicknoller and is currently overseeing the set up.

Jane's home tower has a relatively inexperienced band which has limited her progress in the past. It is only since retiring from shift work in December 2018 that she's been able to attend other practices regularly. She now attends Sampford Brett's practice almost every week where she is able to ring a wider range of methods. During the year she's learned Reverse Canterbury, Plain Bob Minor, All Saints doubles and other methods. She has also started treble bob hunting and has rung several quarter peals. Jane is still a mainstay of the Bicknoller practice and is always willing to help others in the band. Retirement has also enabled Jane to help with branch training courses and in particular with weekly improvers practices. Jane is diligent about doing homework when learning new methods or touches and is eager to take advice from more experienced ringers. She grasps learning opportunities whenever they are available.

Jane exudes infectious enthusiasm which she uses to encourage other ringers and to attract potential learners. She is a brilliant social organiser, has a wicked sense of humour and is very good at quietly encouraging learners and giving positive feedback. She is someone that those who organise the training know they can rely on.

Jane organised a publicity and recruitment event at Bicknoller flower show this summer for which she borrowed a dumb bell from an adjacent branch. She wasn't daunted by never having rung one before, let alone set one up! She organised an amazing rota of helpers and made sure they all knew how to use the dumb bell. The event provided excellent publicity for ringing but sadly was less successful in finding new recruits.

Jane has organised several outings and social events for the Bicknoller band over the last couple of years and is good at including ringers from nearby towers - both as helpers and for their own enjoyment.

Jane has started teaching two beginners and helps run improvers practices and targeted training sessions. She is expected to be accredited for Modules 1 and 2F during the next year. She is also instrumental in planning a recruitment campaign for young ringers in the branch and in the organisation of a training program for the recruits they hope to attract. Jane has the potential to be an excellent teacher and will undoubtedly contribute to the development of ringers in the Dunster area. 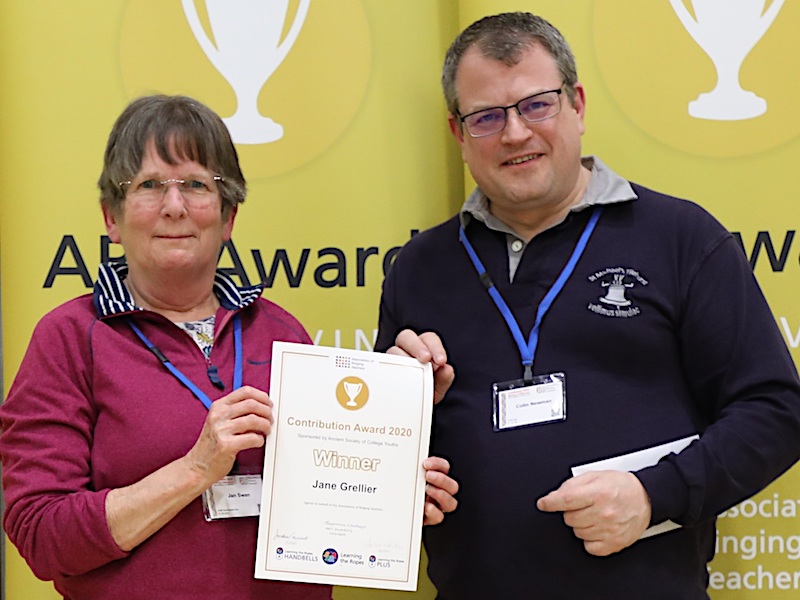