As soon as the topic of calling is introduced you come face to face with a whole lot of jargon, which is off-putting to say the least. If you already call touches on tower bells then this isn't a problem, but if you've not, then you're in for some fun. Persevere! It's not as hard as you might think, once you've learnt how to speak and continue ringing and as long as you've done your homework beforehand.

Note that we're talking about calling touches here. You need to be able to know when to say "bob" and "single". Conducting, the art of keeping others right whilst you do this, is something for much later.

Let's start with some jargon. Traditionally, the calls in Plain Bob Minor are made when the bell from which a composition is being called is dodging 5-6 up [wrong] or 5-6 down [home]. In both positions the calling bell is unaffected – they do the same work as if a bob or single wasn't called. Less frequently used calling positions are (run) in, (run) out and make (the bob). The diagram in the right hand side-bar shows all the calling positions for the tenor.

The bob or single is called not at the lead end but when the treble rings in 2nd place at backstroke when it is hunting down to the front:

The first thing you need to practise is saying "bob" in the right place without going wrong yourself. Treat this as an exercise rather than a performance. Ring a pair that you're comfortable with and then say "bob" at the right place in the lead (when the treble rings in 2nd place at backstroke when it is hunting down to the front). If you miss it, don't worry, carry on ringing Plain Bob Minor and try and put it in the right place next lead end. It doesn't matter if the touch doesn't come round or if it keeps on firing out. You're just getting used to talking and ringing at the same time.

When ringing the tenors

If you're learning to call touches from 5-6 then start with two singles Home or three bobs Home to keep 5-6 together. Then you can move onto the 120 below which forms the basic block of a quarter peal.

The classic touch of Plain Bob Minor is 120 changes long and has bobs called when the tenor (6) is at Wrong (dodging 5-6 up) and Home (dodging 5-6 down). The bobs are called when the treble is in seconds place just before it leads. At every call the 5 is closer to the front than the 6 so the same touch is easier to call by having the 5 make the bob, run out, run out, Home (for the 5 this is 5-6 up). Write out the touch and you will be able to recognise some signposts:

When ringing the trebles

Handbell ringers who haven't called touches on tower bells often prefer to start calling when ringing the trebles, as they find seeing where the treble is from any other pair, is difficult. When it is in your right hand, it is a lot easier!

If you're learning to call touches from then start with by calling the 2 to when it makes seconds place of the treble (at the end of the plain course). Then move on to call the 2 Home and Wrong.

Writing out a touch

Touches are often represented by writing out the lead ends rather than all the work: 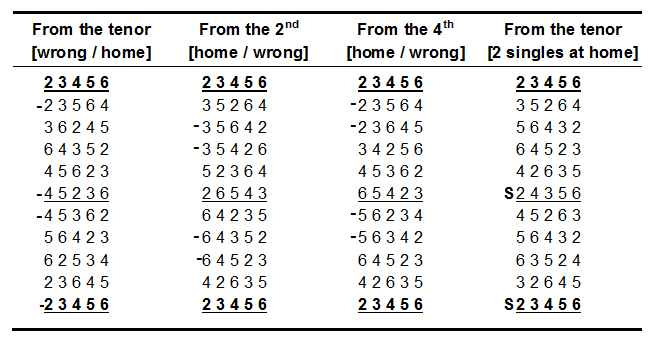 Use ringing simulator software to practise calling touches. Load your touch and learn to ring the touch confidently. Work out where the calls come and think about how you are going to call it either bpppbbpppbb or wrong and home.