Learning the Ropes - Why register a ringer?

My first bell handling lesson was in July 2017 at the Minster Church of St Andrew in Plymouth. I quickly fell in love with bell ringing and found myself extremely well supported by ringers in Plymouth and the South West, which allowed me to progress quickly. I scored my first quarter peal seven months later, trebling to Plain Bob Minor for my birthday on 18th February 2018.

When I started learning, I wasn’t taught using the Learning the Ropes (LtR) scheme. Instead, I started my own detailed written records in a little journal. I keep a note of the towers I’ve rung at, personal achievements and significant milestones. Ringers in South West Devon helped to organise opportunities that I could be part of beyond practice nights: quarter peals, peals, ringing outings, ringing courses and more.

Initially, I wasn’t aware of the LtR Scheme, and when I discovered it, it was too late to log my achievements ‘officially’. If I had been registered on the LtR scheme I would have achieved my LtR Level 5 last September after scoring a quarter peal inside to Grandsire Doubles.

I have now accredited at Module 1 of the ART Training Scheme and I’m working towards my Module 2 accreditation. I have been teaching a few learners, and I have had a great experience in teaching them using the LtR scheme. In my experience, the LtR scheme adds another layer to learning to ring. Like me, my learners have been supported by the same keen group of ringers in South West Devon who are organising the same kinds of opportunities that I was given and continue to benefit from. The LtR Scheme then adds another level of value to these experiences - i.e. the learner’s first two quarter peals (one on the treble, and one tenoring behind) merit a LtR Level 3 certificate. Organised so methodically, it is easier for the learner to take charge of their own learning; to prepare themselves for the next challenge on their list and to be rewarded when they complete it.

For people like myself who find value in a physical record of personal achievements, the LtR Scheme does well. My own method of writing down events and achievements as they happen is in itself a rewarding exercise, but early on it often left me wondering what those achievements actually meant. It is also a painstaking exercise, so most people choose not to keep their own records - for these people the LtR Scheme fills that gap. Additionally, feedback from the teacher at each of the milestones is recorded online and can be revisited by the learner so that on difficult days they can remember how far they have come. When learners reach LtR Level 5 they are invited to an exclusive ringing day course in Birmingham, this is an attractive opportunity which aims to consolidate skills and to introduce ringers to a new group of people at the same level as them. In this way, there is a sense that the LtR scheme widens access to ringing beyond the local area and connects ringers to a supportive network of people across the UK (and beyond!)

In my view, the LtR scheme is an effective tool for ringing teachers and learners alike, and I hope that more towers start to make good use of it. The available resources are very useful in preparing meaningful lessons, also for encouraging progress and independent study. While it does not replace opportunities already available in the ringer’s local area, it does serve to enhance them, and paves a logical pathway for the learner and teacher to follow together.

Unfortunately for me, while being ‘LtR Level 5 standard’ in terms of my achievements logged on BellBoard and despite being taught using LtR methods, as I was never officially registered it doesn’t quite count. I expect there are many more ringers in a similar position. I do feel that in these cases, allowances should be made for people to register onto the scheme later in a way similar to music exams where people can choose to perform for a grade at any stage and skip grades if desired. Until then, the more ART Teachers registering their students … the better! 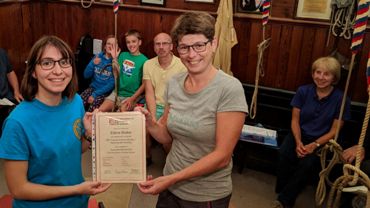