The Ringing World has introduced the concept of pathways. Part challenge, learning, focus and exploration – and hopefully fun. There are three pathways: red, blue and yellow. Each pathway is a set of six steps: each step is to ring a method or a group of methods. To complete a pathway, log a 2020 performance of each step on BellBoard, and link it to a pathway subscription.

A survey last year in the W&P Guild revealed that of the towers that had a local band and held a practice, about 25% were limited to ringing no more than rounds, call changes and plain hunt on practice night. A further 45% rang one and no more than a few doubles or plain minor methods, leaving only about 30% that were able to ring any surprise methods. This is probably typical of the situation in many Guilds and Associations.

Therefore, there is a very large group of bands who could benefit from the Blue Pathway. This pathway enables a less experienced band to progress beyond ringing Plain Bob in a series of easily manageable steps. It can also be a lot of fun learning and ringing these methods together.

The skills that the Blue Pathway methods introduce also enable bands to progress on beyond the Blue Pathway to ring a variety of other methods, with far less learning than would otherwise be the case. This pathway also offers a useful basis for training events. I am also conscious that many of the 45% of bands may not be able to ring Plain Bob Minor. They may be limited by the number of experienced ringers in their band, and also have a lot of people learning to hunt the treble or are only able to cover.

For these reasons, rather than start from Plain Bob Minor, I am going to advocate starting from Plain Bob Doubles and tackling the methods in a different order. This will enable an inexperienced band to add variety and interest for the experienced ringers attending their practices, but continuing to cater for the less experienced members of the band.

We normally start to learn to ring Plain Bob Doubles using one of the following techniques:

Each of these has its limitations. When you make a mistake or get lost (or someone else does), you need to get right, or not make the mistake in the first place, so you need to get to the stage of being able to use a combination of these techniques.

To help ring Plain Bob and progress along the Blue Pathway we are also going to introduce two further bits of theory:

Once you can ring Plain Bob Doubles, you can extend your repertoire by:

The best place for a novice band to start is to ring Reverse Canterbury Pleasure Place Doubles (a new method where places are made in 3-4). Then you can move on to the Southrepps and April Day variations.

Reverse Canterbury is Plain Bob Doubles with places made in 3-4 instead of the dodge. In the plain course that is all that is different. Because places are made either side of the lead-end, at the start the 3rd makes thirds and goes in and the 4th makes fourths and goes out.

Having mastered using the calls that you are already familiar with, you can then then ring Reverse Canterbury with the normal calls. 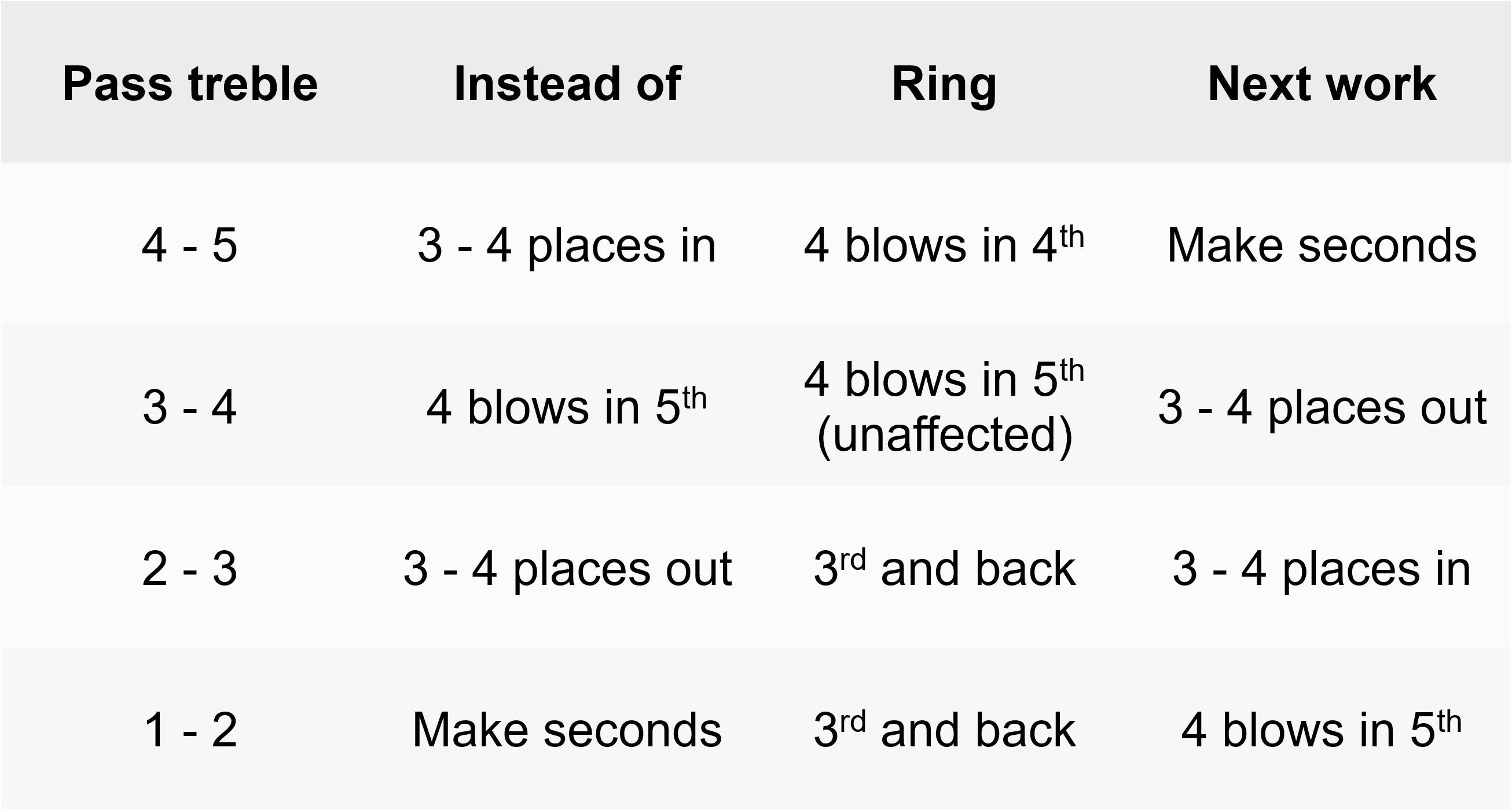 Normally, 120s are called with one bell unaffected throughout. However, the call affects the rows either side of the lead end. If the 2nd is to be unaffected, you need to start with a call e.g. ‘Single, Go April Day’. The 3rd, 4th and 5th will then ring a Grandsire start, rather than a Plain Bob start. The calls are made at handstroke when the treble is in 3rds place going down to lead. 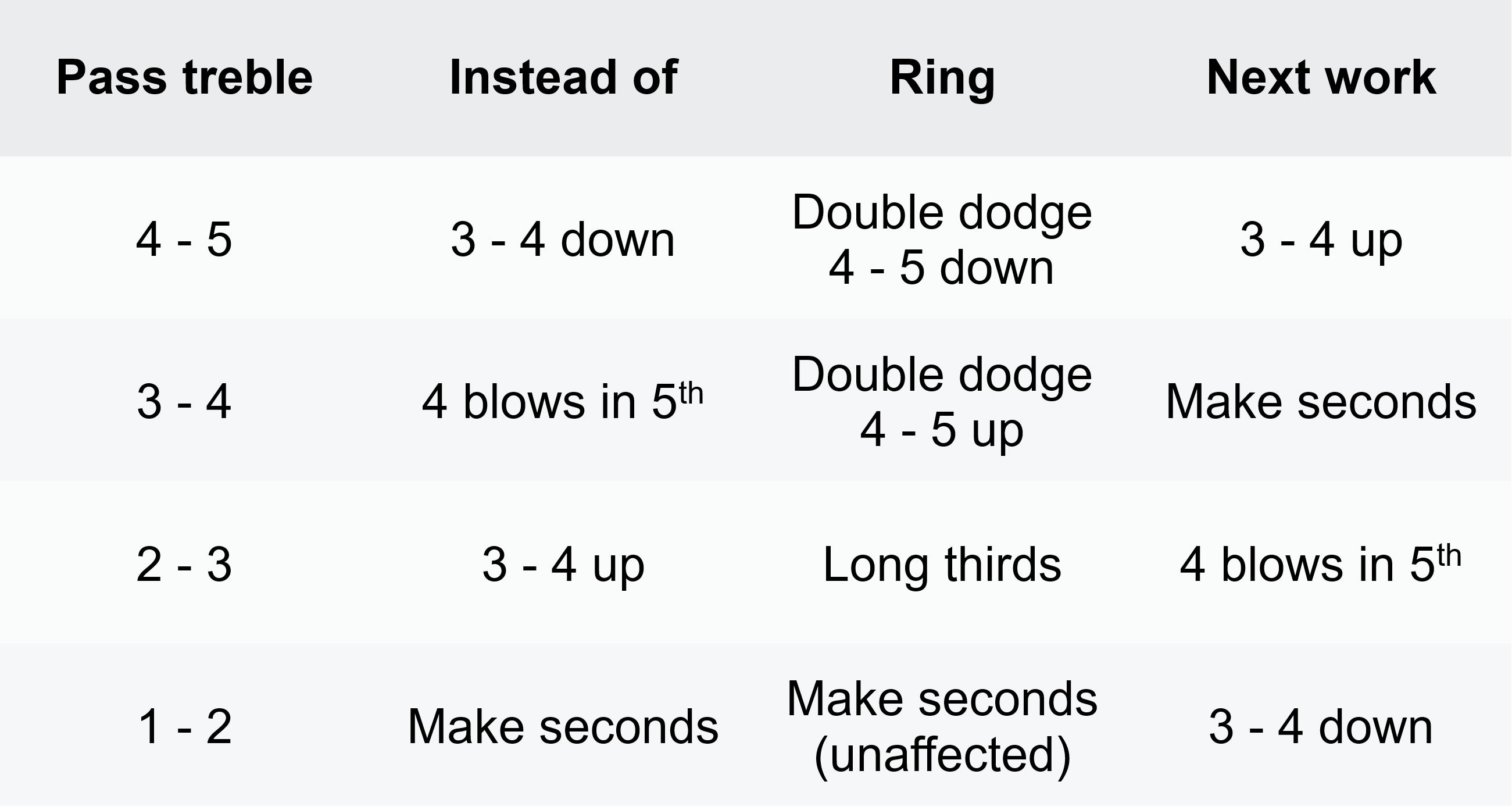 Grandsire is a commonly rung method and is covered in most ringing textbooks, so I do not propose to cover the basics in any detail here. However, I will offer a suggested learning path for those bands which ring Plain Bob and do not ring Grandsire.

Grandsire is a significantly more complex method than Plain Bob or Reverse Canterbury. Not only are there both bobs and singles to learn, but both are required to ring extents of 120 changes. There is also the added complication of bells going in and out of the hunt. Therefore, I strongly advocate building up to ringing ‘all the work’ in a series of stages. The first stage is to learn the observation bell, typically the third, which double dodges 4-5 down at a bob or a single and makes 3rds at the next lead, which can be a plain lead or a bob. There are five different extents where the third does this, plenty for a first quarter peal in the method for a new ringer.

The next stage will be to practice going in and out of the hunt. If the conductor calls BPBPBP there is a touch of 60 changes where the 2nd goes out of the hunt, dodges 4-5 up, makes normal 3rds at a bob, dodges 4-5 down and makes extra thirds at a bob and goes back into the hunt. This touch can be extended to 120 changes by calling a single instead of the first bob, and then repeating.

Finally, the singes can be learnt with the touch SBSP repeated three times to get 120 changes.

So far you will have learnt the Plain Bob and Reverse Canterbury grids, as well as their respective calls. You will have also learnt the Grandsire Grid, with its two alternative calls. You will have been able to ring a Doubles Variation and Grandsire Doubles, which are two of the six steps on the Blue Pathway. You can then look at St Simon’s and St Martin’s which is a further step on the Blue Pathway – and you will have reached halfway! You will also be able to ring one of the steps on the Red pathway – to ring eight Doubles methods or variations!

Some Doubles grids and the methods and variations that they produce 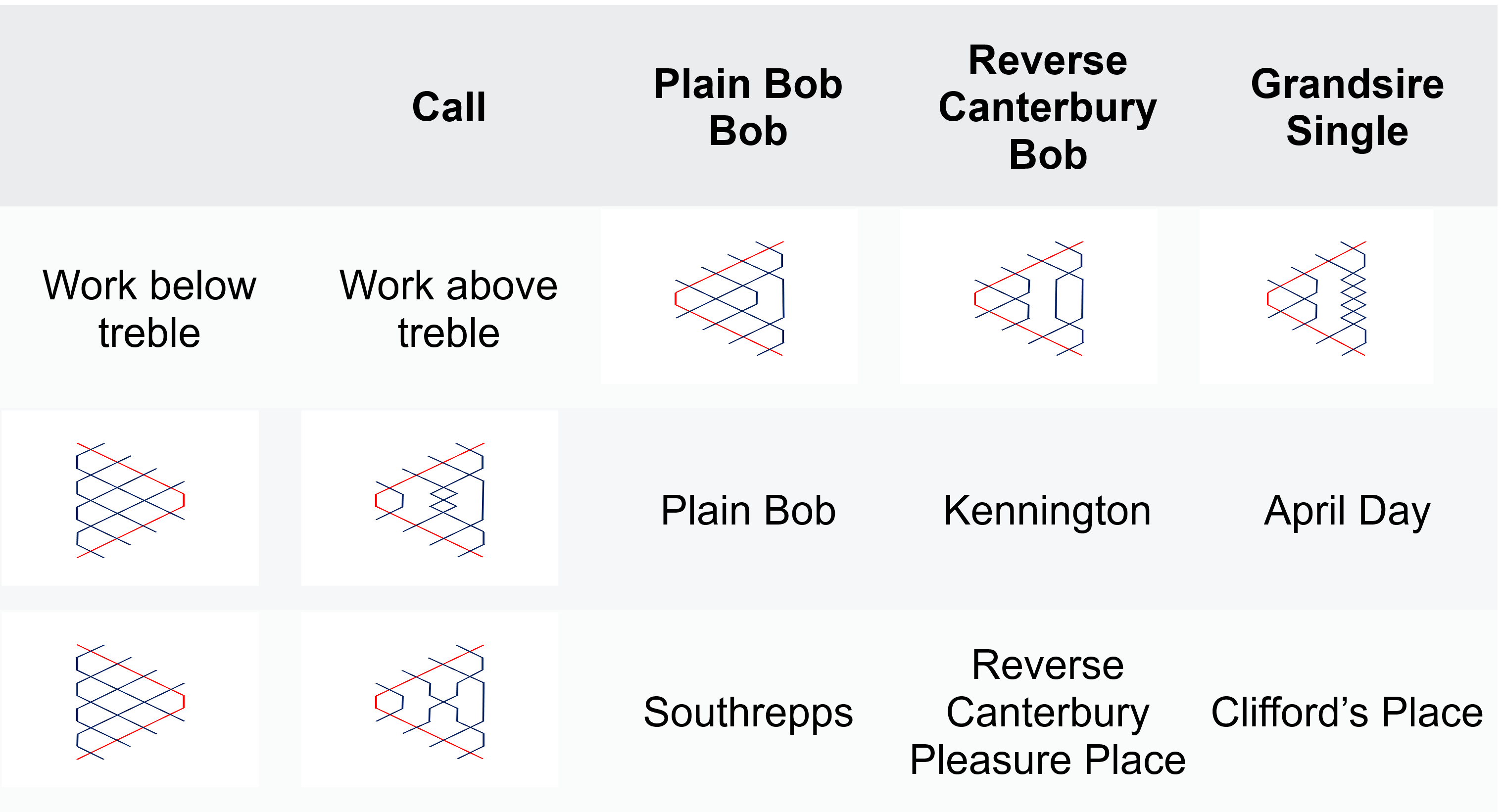 Learning the Ropes Plus

The Blue Pathway overlaps with the Doubles and Plain and Treble Dodging Minor Pathways in Learning the Ropes Plus.

These are two separate pathways, so bands that only ring doubles may find it easier to complete the doubles pathway. There are also some extra methods in the minor pathway which will help you and your band to progress on to ringing Cambridge. in easily manageable steps

Learning the Ropes Plus is open to all ringers.You can purchase a LtR Plus Logbook and tick off when you can ring a plain course and a touch in each of the methods confidently. You can also obtain a LtR Plus certificate once you have completed the pathway by ringing quarter peals inside in some of the methods. For further information visit http://www.learningtheropes.org