Our regular quarter peal attempts have continued to provide good bonding and motivation: 48 successes and a few failures have seen 7 first quarters (Anne-Marie, Alex and Imogen from Wargrave, Edward, Freddie and Joe from Twyford, and Keith from Hurst), and 23 firsts of something different, such as first on eight, away from cover, or a new method. For the less experienced it has given an opportunity for more extended practice and consolidation. For the more experienced it has given a chance to ring something different, such a new Surprise Minor method, or call something not tried before, or not for a very long time! Donations by the quarter peal ringers have gathered funds for making an annual donation to ART as well as the towers at which we ring. Sonning’s Sue Portsmouth is congratulated for ringing her first peal in December.

The Twyford band has gone from strength to strength, their Friday practice regularly assisted by ringers from all the other Loddon Hub towers. They have new recruits including three Year 6 girls, a returner from Hurst, and regular ringing on a Sunday without outside help. They are hoping soon to be able to ring a Twyford band quarter peal. All the current ringers have progressed to change ringing, and the “helpers” are also getting stretched, with Bristol Surprise Major having been attempted at the end of the practice.

Learning the Ropes successes have continued to mark progress within the Hub, Waltham St Lawrence’s Sophie and Holley both achieved LtR Level 3, and Holley made excellent progress to gain her LtR Level 4 and 5 finishing with a quarter peal of Plain Bob Minor at the end of May.

Sonning have been doing a lot of teaching of basic bell handling with Karen and Ellie both gaining LtR Level 1.

Wargrave’s youngest ringer, Imogen, passed LtR Level 1 and 2, as did returning ringer Alex Nicolai. Anne-Marie was delighted to be able to ring her first quarter peal, at first attempt, on the centenary of the Armistice, and young Tabitha gained her LtR Level 1.

We haven’t run as many workshops this year, as the quarters have fulfilled a lot of our practice needs, and the individual towers are more able to provide for their learners needs on practice nights. One of the most memorable was at St George’s Memorial church in Ypres, where, after an hour of consolidated practice, local ringers Liz (treble) and Martin (covering) successfully rang an extent of Plain Bob Doubles and an extent of Grandsire Doubles. Well done to them. We also took wood for stays as ash is hard to source in Belgium, not that we needed them on this occasion, and rang with “Team Ieper” on their practice night. One of our development targets was to re-establish a band at Hurst.A successful recruitment initiative, linked to Ringing Remembers, saw a group of five start to learn in September.As three of the hub’s teachers were able to be involved, the students made good progress, starting to ring rounds on four in October. By November 11th they were all able to ring rounds on eight, a great achievement that may not have been possible if they had been just one isolated tower. All five gained LtR Level 1. Good progress is being made by this new band that has since been joined by another new ringer.

Practices involve a lot of kaleidoscope ringing (including the Ypres Wedding March), with skills of covering and plain hunt starting to develop. Good use is being made of the newly installed simulator, and the band went on a mini outing experiencing some very different bells. Hurst ringers have also benefited from attending other Loddon Hub practices. Meeting six at a Twyford practice in February, we rang an impromptu quarter peal with Keith covering to Doubles, less than six months after his first lesson. He followed that by ringing another at Hurst. Well done Tower Captain Graham, Keith and the Hurst band.

Five of the hubs young ringers - Matthew, Joe (Twyford), Imogen, Tabitha (Wargrave) and Holley (Waltham) - have joined Bucks and Berks Young Ringers, with three being in the SEECON band, and four in the RWNYC band at Liverpool, where they had a great time. Twyford’s Matthew conducted last year and Waltham’s Holley conducted this year, with Joe and Imogen ringing in the competitions for the first time.

“Roped In”, the Hub’s Young Ringers also entered the branch six bell striking competition, along with bands from Twyford and Wargave who haven’t been able to do so for a very long time.Seven teams entered in all, with Roped in coming 5th, Sonning 4th, Wargrave 3rd and Twyford 2nd. Just shows what a hub can do! 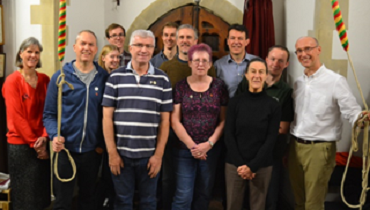