An invitation by one of the South Walsham ringers to a summer BBQ at their holiday residence down by the Broad seemed too good to be true. Then the band of novice ringers asked if they could have a ring at Great Yarmouth – one of them had learnt to ring there as a child and had not been back since. Most of the group had recently attended the ART Learning the Ropes Festival in Norwich and had “had a go” at ringing at Mancroft so they had no fear!

The Tower Captain at Yarmouth is very keen to have her bells rung, so our enthusiastic team were onto book the bells straight away. This is all very well, but they can only ring on six and they ring Mexican Wave, Big Change Little Change and Rounds. They have all experienced ringing all their own bells, but they now want to ring at a 30cwt twelve not a 9cwt six.

A plan was put in place – get used to the bells first. Ring Rounds on six. Ring Big Change Little Change on six. If needed, ring Switcheroo to get a feel for ringing slowly. Repeat this pattern on eight bells, then ten and finally twelve.

We produced a good quality sound. I was very surprised that moving people further round the back really helped. The slower they rang the more thinking time they had.

There was a lot of fun for those who fancied a go on the tenor, again working round to a heavier and heavier bell.

I’ve run this session again opening it up to the Association. I asked that each ringer could ring on their own and have control of their bell. Two hours of mainly ringing rounds flew by. The tenor ringers I’d lined up were soon queuing to have a go ringing the treble and leading. The junior ringers are fabulous at shouting stand. It’s a great opportunity to try ringing different bells and it’s the perfect exercise for bell control.

I plan to run more of these sessions going forward. 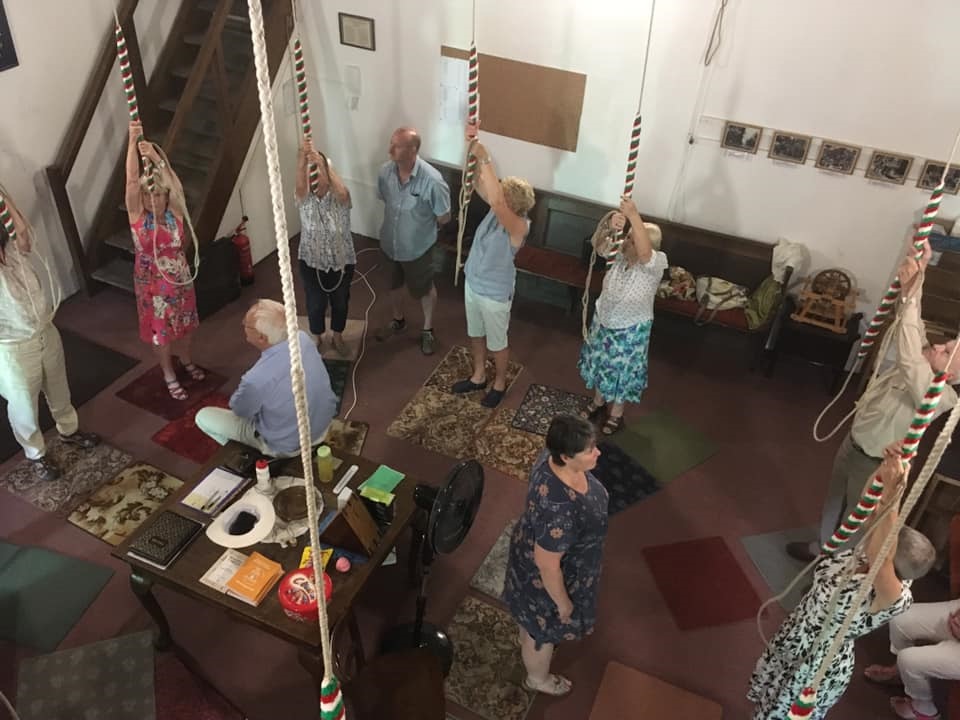 Ringing on 12 when you can scarcely ring on 6

The first time I ever rang on 12 bells was in the iconic St Peter Mancroft ringing chamber, the scene of historic peals and momentous ringing events. I rang the second with a teacher doing rather more than hovering nearby. My bell control was minimal. I had been ringing a few months.

A year later I rang in the same room, this time the third, during the Learning the Ropes Festival of Ringing. Someone still hovered but did not need to rescue me since I could control the bell, although the rounds sounded somewhat uneven as most of the band were fairly inexperienced.

The next time I rang on 12 was at Great Yarmouth Minster and I did not even realise that 12 bells were on the menu. I had moseyed up, ready to ring the bells, thinking that we might try 8 as a daring extension to our usual 6 bell repertoire, when it soon became clear that 8 would not be enough.

The crafty teacher in charge lulled us all into a false sense of security by starting on 6. Rounds on 6 she called, and who wouldn’t volunteer for that? So we did the 6 and since no one called any changes or started anything dodgy, it looked like we would be in for a gently relaxing afternoon. Then things started to ratchet up. Rounds on 8 she called, and 8 is only 2 more than 6, so why not? Rounds on 10 she called and the option of sitting out and admiring did not seem to be available. Rounds on 12 she called – and having done it on the simulator, why not give it a try on the real thing?

And each time the number was boosted by another 2, the demands for good bell control increased. Of course if you suffer from a stabby pull you will be punished severely in this scenario. Again and again I was punished severely. Until I started to pull all the way through, I struggled and felt mightily frustrated, since you cannot hold up a bell to fit in with the other ringers if you do not have it firmly under your control. I found, eventually, that moving round towards the back to a much heavier bell that rang more slowly was the answer. Finally, I was able to hold up when I wanted to, and although I could not hear what was going on, since so much was going on, I could at least be in approximately the right place.

A month later we had another 12 bell novice session and this time I felt more prepared and knew to manoeuvre myself into the back 6 where at least I had a chance of ringing at the correct speed. We even managed to start a 12 bell Mexican wave to mark the UN International Day of Peace.

So for an inexperienced ringer, why bother to ring on 12?

Ringing on 12 is exciting, challenging, exhilarating and humbling. For those of us who can just about hear our own bell in a 6 bell tower, the rumble of bells 9-12 as they roll around the back is astonishing. If you are ringing somewhere in the middle it seems unbelievable that anyone can hear their own bell, but clearly some people can. We must try harder to listen.

The demand for good bell control is obvious, and those of us who struggle with short pulls and flappy hands, particularly when under pressure, have to quickly smarten up if we do not want to be endlessly humiliated by a dropping bell that we just cannot make hover although we know that we have to.

It is also reassuring to witness that we are not the only ones. Even some of the experienced ringers who are not used to 12 have to learn this new skill and show the sort of humility that we newbies are called on to demonstrate nearly every time that we ring, whether it be 5, 6, 8 or 12.

The other advantage to 12, is that there are lots of heavy bells to choose from for those that enjoy the weightier end of the spectrum. There were very satisfied grins from some of the ringers, particularly the ladies who do not always enjoy the opportunity to act in such a sturdy manner. And the young men who are often invited to blow behind, enjoyed being shunted off and encouraged to ring the treble.

Allowing us to experiment and experience the full majesty of a decent ring of 12, is to give us a glimpse of the possible and spur us on to greater things. Few of us will make it on to 12 bell teams, but at the very least when we turn up at some cathedral or other grand church during our holidays and are faced by a ring of 10 or 12 we will be able to roll up our sleeves and acquit ourselves in a respectable manner.

We are ART trained and we should always strive to make our teachers proud.