On the last Saturday in June (straight after the end of GCSE exams) a group of seven young ODGers attended the first ART Teaching Bell Handling course run just for young ringers. It was a long time in the planning, but hopefully this will be the first of many “motivated by the understanding that to secure the future of ringing, we must engage the younger generation in teaching. ”There were a range of delegates from Year 9 through to university, some of whom were part of the winning ODG band at the RWNYC the following Saturday. Thanks go to the ODG who sponsored each of the Guild students on the course.

It was great to see how quickly the young delegates picked up the different teaching techniques and skills. I’ve never seen the practical sessions whizz by so quickly, and everyone relished trying different ways of teaching. Being totally immersed in learning at school probably helps, so leaving their comfort zone feels normal for these delegates.

“The practical sessions showcased some interesting techniques for teaching specific aspects I saw for the first time, though testing them out with both left and one-handed ringers presented unexpected challenges! These ranged from fielding wayward ropes to exercises for dealing with specific idiosyncrasies (handling errors).”

Originally scheduled as a national course, we watched as young ringers from around the country enrolled and then cancelled – obvious in hindsight, but the logistics of attending the course are not in the hands of the young ringers but their parents and a drive from Kent or South Wales to Abingdon can be a hard sell. In future I think it will be better to focus on one or two neighbouring youth groups, rather than advertising nationally.

Talking of what we learnt, we thought that holding the course after the last GCSE exam and before the school holidays was a great idea, however so did every other hobby and activity attractive to teenagers and we found ourselves competing with the likes of the DofE scheme as well as the Glastonbury Festival.

Many conversations were had with the OUS who were keen to come, but in the end Craig was “the only Oxford University Society representative due to an unfortunate mismatch with term dates.” The course was too late in June for them!

So, was it worth doing? Oh yes! Seven young ringers, with no or some teaching experience, obviously enjoyed the day and learnt so much. They have been paired with experienced mentors to practise before they go to university. As for us, we’ve learnt to focus geographically, to be even more careful about the date and to involve the local university societies in this conversation. ART is prepared to make a small loss on such courses if only a small number of delegates can attend, because it is the right thing to do.

The final word goes to Craig: “I personally chose to attend because most of my teaching experience has been only as a short-term substitute, so I thought I would benefit from the long-term progress arc and the structure and support that ART provides."

My own handling issues, including a persistent ‘floating hand’ also led to a lack of confidence in teaching handling, but this was somewhat resolved in the practical sessions, culminating in a demonstration of very effective prompting. I look forward to completing the rest of the Module, with online resources and a teaching logbook to tap into with support from my ART mentor, and a final assessment to become accredited.” 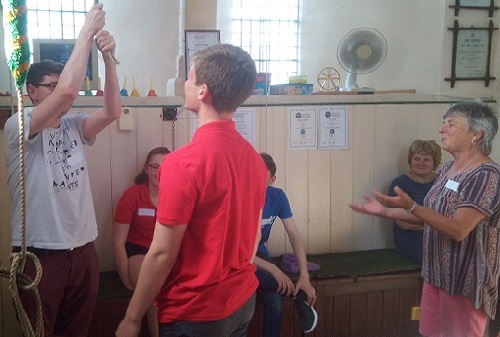 with quotes from Craig Robertson (OUS)