Almost exactly three months after our initial ITTS Module 1 Day Course, and following an extremely successful recruitment campaign which has resulted in several new ringers joining the team, we found ourselves back in the Church on 30 September with Graham Nabb, taking part in the next stage of training: ‘ITTS Module 2 – Teaching Elementary Change Ringing’.

Our primary reason for undertaking the Module 2 Day Course so quickly was that almost all the trainee Teachers who had been present for the Module 1 Day Course had now passed this Module and our initial group of new learners were very comfortable with ringing rounds (and some basic call changes) so we needed more material to teach them.

Having been very impressed with the way module 1 training allowed us to teach ringing by breaking down all the stages into manageable steps, we were keen to continue in this way now that we are about to start teaching change ringing. Rather than follow the ‘old school’ approach of taking a learner from rounds, through call changes, then immediately onto plain hunt, we wanted to learn the best way to help someone at this important and formative stage of their ringing development. By learning how to teach the foundation skills for change ringing, we would be offering a good start to our new ringers as they later move into method ringing. As we had imagined, the ITTS scheme for module 2 had plenty of useful, easily comprehensible training ideas to allow us to do just that.

The day began with a powerpoint presentation, covering topics such as motivation, goal setting, how to provide useful feedback whilst teaching and how good foundation skills were absolutely essential if new ringers were going to continue to reach their full potential. This was followed by a practical session up in the tower (using tied bells and the simulator which we had been partly funded from grants awarded by the Ringing Foundation and the ODG). We began by ringing simple methods such as Bastow Little Bob, demonstrating how this provided opportunities for a new ringer to ring the treble to first and second place, gaining an awareness of ‘place’ within a change and preparing them for plain hunting on a higher number of bells. The importance of not telling a learner which bell they should be following was emphasised, enabling them to think in terms of ‘place’ and help develop listening skills / ropesight. Throughout the morning we learned several other useful (and enjoyable!) teaching games such as the Mexican Wave, Dodgy Call Changes, Switcheroo and ringing tunes by standing our bells at hand and backstroke. All of these activities are not method ringing, but help to develop all the foundation skills needed, such as bell control, awareness of place, listening, good striking, rhythm and ropesight. We also played ‘follow the leader’, where the lead bell varied their speed each round and the rest of us had to keep up and the tower was full of laughter as we rang call changes where the ringer would spin round on the spot at backstroke and face outwards when their number was called – all of this helps develop confidence, control and listening skills. We also learned how to hand a rope to another ringer whilst ringing (at backstroke, so that they take over the next handstroke seamlessly) and how this can help build bell control and confidence.

We had a nice buffet lunch downstairs in the Church and there was lots of lively chatter as we discussed and shared some of the ideas we had learned.

After lunch, Graham gave us a further powerpoint presentation on topics such as ‘building a band’, ‘running an effective practice’, and how to set achievable yet still challenging goals for each ringer to aid motivation and retain their interest. We learned that by properly planning a weekly practice (by physically writing down relevant goals for each ringer), far more can be achieved during the actual 90 minutes of practice time. By placing a band intelligently, each ringer could be given the best chance of achieving their goal than simply by letting anyone grab hold for their touch – regardless of ability, but if the evening was planned in advance, time could be made for each ringer to have their fair turn with the method or exercise they were hoping to practise. We then returned upstairs to take part in further practical exercises geared towards teaching methods and improving striking.

We rang exercises such as Cloisters (allowing ringers of different levels of ability to take part and providing foundation skills for Stedman), Penultimus – to help develop ropesight, Variable Hunt Bob Doubles – to provide awareness of treble passing and also an opportunity for a ringer to plain hunt on a bell other than the treble. We rang Bayles method in Bob Doubles as a useful tool in helping a ringer who has a particular problem with one piece of work, treble bob hunt on 4 and 6 bells, Original Minor and had a quick taste of just how challenging it can be to effectively ‘stand behind’ a new learner and offer relevant advice at the most appropriate time.

Many of us had stood behind trying to help less experienced ringers before, but had not really grasped how specific advice needs to be to be meaningful. Terms such as ‘steady now’, ‘quicker’ and ‘hold up’ may be easily comprehensible to the ‘teacher’, but are of no help in advising the learner how to achieve the desired result. E.g ‘quicker’ may be interpreted as relating to every stroke when we really only wished to convey that the handstroke needed to be a little quicker.

By the end of the day, we were all keen to start putting some of these new ideas into practice, yet were all aware of the challenges that lay ahead in becoming good teachers of change ringing and good session leaders. 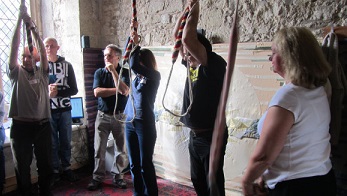