The preparation in the morning of this module 2 course took a while. First we had to muck out the choir room where we would be holding our theory sessions, who knew choir boys could be quite so mucky? Then we had to discover why Graham’s projector seemed to have a nasty case of jaundice. Fortunately we had a spare that was healthy so we were able to start, once we had located the errant local ringer who hadn’t read his emails and was waiting in the wrong place. There's always one, and usually it's the same one!

We started with a whistle stop tour of the syllabus for the day and and overview of where we should be after Module 1. To be honest, having attended several courses in various guises i.e. pupil, helper, mentor and local organiser, I wasn't paying a lot of attention to what Graham was saying, sorry Graham. Instead I was looking forward to getting up the tower and seeing what the students thought of some of the exercises they would be having a go at and worrying slightly about our simulator as we had only just installed it and this would be its first outing, no pressure!

Fortunately the simulator behaved itself (must have been the expert installation team!) unlike the local who found it amusing to keep altering the key of the bells until he found one he liked. Luckily everyone was concentrating so hard on the exercises and how they could help their learners with the transition from rounds ringer to change ringer, they didn't seem to notice the frequent key changes.

Terms such as Switcheroo, Penultimus, Mexican Wave and Bayles became familiar, understood and assigned to the memory banks for use at the next practice night. The importance of being able to move a bell around at backstroke as well as handstroke seems pretty obvious but how often do we teach this before expecting a learner to ring plain hunt?

The dirty (for some!) topic of planning was raised several times; the days of turning up to run a practice and winging it are over! To give everyone a prime ring and ensure team progress is being made, planning is a necessity. If people get a prime ring and can see themselves making progress they are going to be happier, happy people make a happy team. So basically planning can make you happy!! Honestly!! 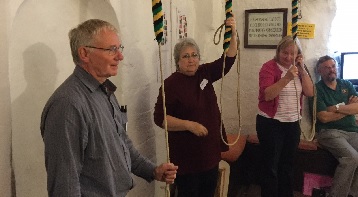