The day began promptly at 9:15am in Longcot chapel with a short introductory presentation about ART and the day's course which aimed to give us a host of techniques with which to teach ringers from rounds up to plain hunt (while we all woke up!). This was followed promptly by a presentation on "foundation skills", looking at exactly what they are, their importance and how best to teach them in a compelling way that is both rewarding for learners without pushing them on too quickly and (most importantly) flexible for the learners and teachers too! In reality describing this as a "presentation" is an oversight since at various points there was discussion between all of those present, sharing their respective experiences on some topics discussed - this added a great additional dimension to the presentation and really helped to reinforce some important points which can easily be overlooked. The same can be said of the other presentations later in the day.

Once this was done (still only 10:00!), we made the short walk over to Longcot church and began testing out many of the things we had just been discussing.

Firstly we experimented with some ways to practice/teach bell control, which included a lovely rendition of "Twinkle, twinkle, little star" and (definitely not trivial) jumping from rounds to reverse rounds in a single change!

Next up was listening exercises, many of which I had never even considered as things you could try with learners - I'll definitely be taking a few of these with me and testing them out - such as ringing on a small number of bells (say 2, 4 and 6) then adding in the extra bells one by one until you are ringing rounds on 6.

Then we moved onto ropesight exercises, and amongst other suggestions discussed how using new technology such as simulators to teach this can be very effective as it allows you to see all of the ringers in one place.

Up to this point we had unsurprisingly been sailing through the exercises, since as teachers we were all plenty experienced enough to ring all of the above to a high standard ourselves… but this all changed with the next thing we were asked to do… Clapping. The brief was simple, sit in a semi-circle of 6 people and begin with everyone clapping 12 times and shouting out the number of the bell ringing at the appropriate time, then pausing for one "beat" for the handstroke gap and repeat. Then move on to only saying your own number, and eventually doing a strong clap when your bell is ringing and a weak clap for every other bell… but remembering to not clap during the handstroke gap. Easy, right? I'll leave you to try it yourself, and with the warning that a certain experienced teacher who will remain unnamed managed to accidentally put a handstroke gap halfway through the change instead of clapping(?!) for their own bell!

By this point a short tea break was very welcome before we moved into the next practical session on teaching call changes. This mainly focussed on improving our explanatory skills and correct/consistent use of jargon, which has far reaching uses in all levels of teaching, but is especially important when you begin to teach ringers to change the speed of their bell.

A lunch break followed this, before we had a presentation about coaching and building a band to ring. This highlighted some very important and useful tips for people running practices such as choosing the right band to ring each method to give it a good chance of succeeding whilst still pushing some people.

After this we returned to the tower for a session focused on Kaleidoscope ringing. I will admit that previously I had overlooked this as being a bit silly and not very useful, but I can say for certain now that it is very useful, flexible and effective for teaching a variety of very specific things that I will employ in any teaching that I get to do in the future!

In this session we were given the task to (in pairs) create our very own Kaleidoscope patterns, explain them to the others and then test them. A few of us may have forgotten that the overall course was aimed at teaching learners who were making the step from rounds up to plain hunt and designed some rather fiendish "methods" which were instead designed for people learning to ring methods such as Stedman, Cambridge, Yorkshire and Wells.

Although personally thi in fact opened my eyes to the potential possibilities and wide range of uses of this style of ringing.

The final practical session of the day was aimed at introducing ringers to covering and plain hunting. During this we saw some very useful methods which can act as stepping stones between Kaleidoscope ringing and plain hunt on 5, such as Bastow and Cloister.

After a brief summary presentation, the day was done. I must say that the day exceeded my expectations on pretty much every front!

It opened my eyes to a number of methods of teaching and was very enjoyable throughout! I'm sure that all of us that attended would like to say a huge thank you to Judith and everyone else that helped organise and run the day! 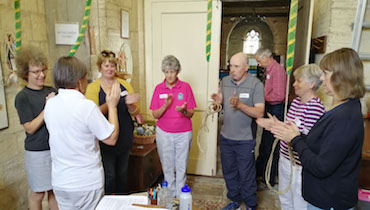 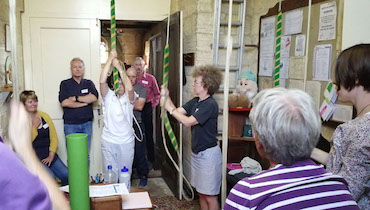 Teaching from Rounds to Plain Hunt

Learn how to teach build really good foundation ringing skills in your ringers.

» Find out more about Module 2F 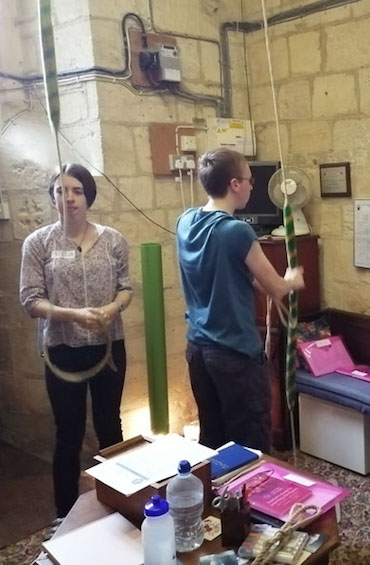