Following a successful first year with the Birmingham School of Bell Ringing (BSoBR) and an ITTS Module 2 Day Course on New Year’s Day, an ITTS Module 1 Day Course was organised to take place at St. Paul’s Church, Birmingham on the 28th of August 2014. This date was a Thursday, but that didn’t stop people coming along, with many people booking days of work to attend. A total of 14 prospective teachers attended the course, most from the St. Martin’s Guild and connected with the BSoBR, but some from Greater London and even a handful from outside the UK. (However, the College Youths ‘UK 2014’ event might have helped with this.) The course ran through the morning and afternoon, combined teaching theory with practical sessions and was led by Graham Nabb, one of the key figures in ITTS and ART.

But the course was about much more than teaching how to teach bell handling. It was just as much about teaching how to teach. Remember, ITTS was developed by Pip Penney, both a bell ringer and a physiotherapist. The first part of the course discussed the 3 main different types of learner – Auditory, Visual and Kinaesthetic. In short; some people like to be told what to do, some people like to be shown what to do, and some people want to try for themselves and learn from that. It’s important for any teacher – not just of ringing but any subject taught one-to-one – to recognise what sort of learner any one of their pupils is.

Many ideas about teaching, often quite revolutionary ones, were discussed throughout the day. For example, giving a new ringer a solo session during a practice night is a waste of time. They won’t learn anything in such a short space of time and the rest of the band will be sitting around doing nothing. Initial handing should be taught to a level where a learner can begin to ring with a band before they start at practice night. This should be done in a few intensive sessions so that any new learner can get somewhere in ringing quickly and then feel part of a band.

“But what if we want to put them in rounds when they can only ring backstroke?” was a question raised. And no definite answer was given, it’s whatever the teacher thinks is best. There has been a lot of discussion amongst ringers about the rigidity of the ITTS scheme and what it does and doesn’t allow, and the truth is that it can be quite flexible. There is no one ‘right’ way to teach people – the fact that it tells about 3 main styles of learning shows this – but there are better ways of doing it that the currently accepted norm.

When most people start to learn to ring, they are given the tail-end for backstroke and told not to let go of it. Because it’s one of the first things they are told, they will always hang on to it. Which makes changing tail-end lengths a problem later on. We experienced ringers may not think what we’re saying when introducing somebody new to bell ringing, but these are people who are not like us. They have no idea what it is like to handle a bell and most of their ideas about bell ringing will come from a 19 century gothic novel and an advert for a certain brand of chocolate. Terms such as “ring closer”, does that mean change where you’re standing so that you’re nearer another ringer? We use many obscure terms in ringing, and these should be avoided as much as possible.

If the theory sessions pushed boundaries then this was reflected in the practical sessions. New teachers were taught several ways of getting potential students to ring backstroke, hand stroke, up and down, and given ideas of how to correct handling faults. This was done by breaking the group into pairs so that each new teacher could ‘teach’ another, even though they already knew it. Graham came around to each pair several times during each practical to make sure that everything was being covered. Methods to get new ringers to pull all the way down at backstroke, to catch the sally without pouncing on it, to put on the first coil of rope when ringing down and many other things were discussed and put into practice. All the bells used for this were tied, so that there was no risk of disturbing any of the neighbours at St. Paul’s.

It was a splendid yet intense day. St. Paul’s has a purpose teaching room directly underneath the ringing room, so moving between theory and practical sessions didn’t take long. There was so much talked about over the day that a much longer report could be written about it, and it was only thanks to the seemingly endless supply of food (ably provided by other members of the St. Martin’s Guild) that the author managed to make it thorough the day. ITTS has come under a lot of criticism from people who argue that there is no need for standardised, structured teaching in bell ringing. All I will say to this is: “Don’t knock it until you’ve tried it”. 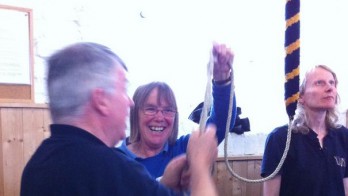