Acquiring that elusive skill known as “ropesight” can be a frustrating time. I believe you can’t specifically teach or learn “ropesight”. What you can do is provide the best opportunities for the skill to develop and teachers can reassure learners that they will develop it at their own pace. The teacher needs to watch out for sticking points and try to find interesting, creative exercises that suit the occasion to avoid learners becoming dispirited.

The process should begin as early as Learning the Ropes Level 1. Yes, the primary focus is on actually learning to control a bell, but at the same time the learner should be encouraged to watch other people ringing and guided in how to do so. The need to look at the hands and faces of the other ringers is not as obvious as experienced ringers may think. I discovered relatively recently the reason one of my ringers has an ingrained habit of looking up. As a conscientious learner she spent many hours, while sitting out, trying to watch what was going on and acquired a habit of looking up and watching the sallies descend. Despite frequent reminders and knowing it’s unhelpful, she still feels pulled to default to this when “lost” and felt quite uneasy when visiting a tower with a low ceiling because the sallies disappeared from view.

These are best done from a standing position to discourage looking upwards.

As soon as a learner can ring rounds reasonably well, start to introduce a range of Kaleidoscope exercises and Call Changes (Learning the Ropes Level 2). Aim to develop the ability to follow different bells as well as listen to the sound that’s produced. Encourage visual scanning of all the other bells that are ringing. Point out that as soon as you’ve committed to a backstroke or handstroke you cannot alter that stroke – so immediately start scanning for the next bell to follow rather than watching the bell you’re already following for too long. Additionally the learner should gain an understanding of place in the row and learn to lead with a good rhythm.

Using a band of five stable ringers plus the learner, place the learner on the 4, 5 or the tenor, depending on their physical ability and weight/go of the bells. The reason for having six bells ringing is to provide a six-bell rhythm. Ask the learner to attempt exercises such as:

Encourage both listening and looking to see who they’re following; learners will vary in which they find easier. Explain that “seeing” is a ropesight skill which complements listening. Point out that you cannot wholly accurately place the bell merely by looking, but it’s the looking that gives you the approximate position and the listening that allows you to fine tune it.

Why look? Why not just listen?

Around this stage, if not before, some will notice that many experienced ringers appear not to look at all, instead seeming to find inspiration from the pattern on the carpet. Use this to prompt a discussion and exercises on the use of peripheral vision and an awareness of the other bells. It can be very useful to do some whole band exercises on this, by asking the entire company to look at a point in space and rely only on peripheral vision to strike rounds. It is not unusual to have better rounds than expected!

It’s worth pointing out that when you’re inexperienced or unfamiliar with what you’re ringing, using direct gaze along with peripheral vision can be helpful for two reasons. 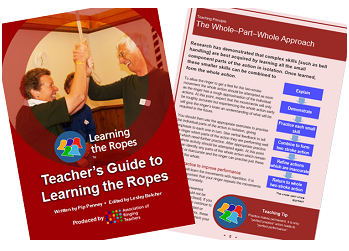