The day was sunny when we started and ended miserably with wind and rain, but that was in no way descriptive of the 8 ringers who gathered for this course either as mentors or students, one other unfortunately withdrew at the last minute due to illness. We came from all directions and varied experiences in terms of age when we learnt and place of ringing.

An initial theory session was definitely varied – with examples gained from initial training and improving techniques of physiotherapists and sports scientists as well as previous teaching in bell control. This was followed by the first ascent to the ringing chamber for backstroke and handstroke basic components and the debate ‘Do you start with the bells up or down?’; it was proved that both can work. Down the stairs for coffee, then up again for joining both strokes together. For the practicals we were in teams of three – teacher, pupil and observer to guide the others - and worked with tied bells. More discussion then on how this helped with the whole-part-whole approach to teaching.

We had been warned at the beginning of the day that we had to leave at 12.50 for lunch at the Red Lion. There we had good service, fine, varied meals and a quiz on learning styles, broken by discussions on the price that should be charged for ringing for weddings – typical ringers chat - as well as the price that petrol had got to - 174p per litre was claimed. Immediately after this, practical guidance on ringing up and down. Then more theory on how to become a good teacher; some groups had already picked up points on this in their efforts during the day. This was followed by tea and cake and then a DVD screening helped with solving handling problems. Some practice on this with demonstrations of poor style in ringing from Les Boyce, our versatile and inspiring tutor who was ably supported throughout the day by his partner, Sheila. He showed both the error and method of dealing with it. Finally, our ‘Next Steps’ were guided and questionnaires on the day completed before we left into the real world with wind and rain.

Hopefully, students who didn’t know what you were trying to teach them and were put off by a bad experience from unplanned, improperly guided initial sessions in bell control was now a thing of the past! And we had spent a day in a lovely light church with fine columns of Beer stone and nice bells in a spacious ringing chamber. 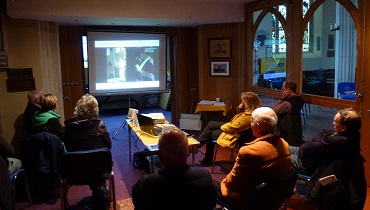 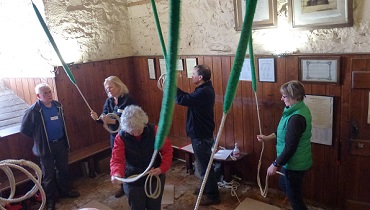