I was lucky enough to be one of the ringers attending the course with tutors Graham Nabb and Moira Johnson, and I have to say it was brilliant – although I wasn’t the one Nic Basford locked in the loo so I’m ahead there! Fortunately Graham was counting heads so the poor chap wasn’t there too long.

One of the most striking things (if you’ll excuse the pun) was one of Graham’s first questions of “how long does to take to learn to ring?” We all gave the usual responses varying from weeks to months to years but Graham’s opinion was it is actually only 10 to 15 hours, but if the learner is only getting a few minutes a week on a bell then it will be months.

The mix of theory and practical makes for a very interesting day. Working in pairs and using each other as learners was very useful, and we went through various steps of teaching bell handling. We also had a session on correcting handling errors – so I have a lot of work to do to put mine right as I suffer from “floating right hand syndrome”! That alone illustrated how important it is to get it right in the early days and not let errors become a habit – ringing is a lot about muscle memory and, like everything in life, if you remember something wrongly it’s very hard to correct later.

So now I’m off to find some learners to put things into practice – God help ‘em! 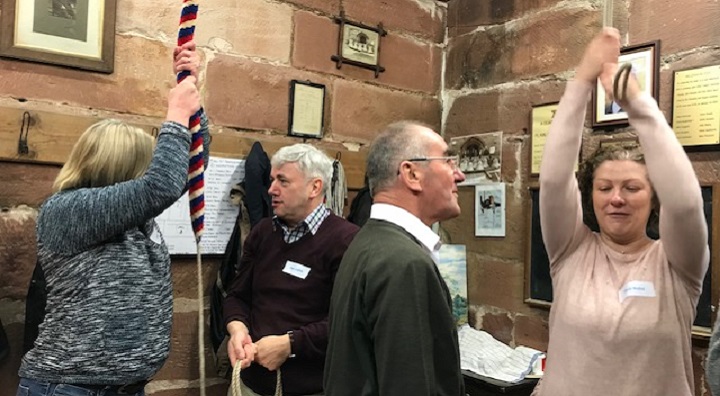