My return journey (by train) was quite a contrast to the journey I made in the morning. On the way to ITTS Module 1 – Teaching Bell Handling at St Clement Danes, I scanned through the various documents I had been sent in advance. I had quite a comprehensive collection: ‘Becoming a Teacher,’ ‘Becoming a Mentor,’ details of the Scheme structure, ‘Learning the Ropes,’ and ‘Steps to Accreditation.’ Everything seemed very professionally presented. There seemed a distinct structure to follow. I thought back to my own first experiences on the end of a rope and to beginners I had taught myself, and to the scepticism and the questions of ‘what’s that then?’I had met with when I announced I was going on an ITTS Day Course.

As a provincial ringer, its always a thrill to get the opportunity to ring at a ‘famous’ London tower, St Clement Danes was suitably exciting. Our theory sessions were to take place in the Crypt at St Clement Danes. We were greeted with a course pack containing three booklets: the Ringers Personal Logbook, Teaching Tips and the Teacher Training Logbook and a number of loose sheets detailing the Scheme structure and content. The Crypt had neat rows of comfortable chairs and a laptop, projector and screen – bell ringing goes corporate!

Eleven ringers joined two ITTS Tutors on the Day Course. With the exception of one participant, all present had previous experience of teaching initial bell handling to a greater or lesser degree.

Graham Nabb lead us through a day that involved four theory sessions in the Crypt followed by four practical sessions on the end of the ropes in the tower. We soon discovered our introduction to the corporate world of bell ringing had been quite deliberate. Graham began by describing many a familiar rural tower on a freezing November evening. Ringers shuffling in at ten to eight despite a seven-thirty start. A selection of 1970s carpets forming a garish patchwork on the ring chamber floor with a ‘museum worthy’ collection of antique electric fires strewn around in a state of disrepair. Then finally ten minutes on the end of the rope with a 90 year old teacher who can give a lesson once a month over the next three years . . . Is it any wonder that ringing is experiencing falling numbers, an increasingly aging ringing population and a recruitment crisis? The Ringing Foundation (who are funding supporters of the Association of Ringing Teachers) are seeking to raise the profile of ringing as a hobby, pastime or skill to compete on a par with canoeing, karate, fencing, ballet (for example) and other such activities that have a well defined training programme and structured progression leading to competency, enjoyment and regular and satisfying participation.

ITTS Module 1 – Teaching Bell Handing has been designed with the help of, among others, educationalists, sports scientists, physiotherapists and experienced ringers. During the theory sessions we were taken through a toolbox of activities to support the teaching of each component of handling a bell. We were introduced to the possible different learning styles of our students and how to tailor our teaching to meet their individual needs and a vast collection of experience and resources to support learning and teaching at every level. Each theory session was followed by a practical session in which toolbox components were demonstrated and practised under the close scrutiny of the ITTS Tutors. There was plenty of opportunity for discussion. It was refreshing to compare notes with other Ringing Teachers and to hear Delegates talk about problems, techniques and trepidation(!) experienced during the teaching of bell handling.

On completing the course all participant now have enhanced access to the ART Moodle website and particularly the section allowing access to teaching tools and resources and the opportunity to register new learners on the carefully structured ‘Learning the Ropes’ programme. Learners have access to a wealth of information, videos and teaching resources as they follow a progressive scheme in five steps from bell handling to ringing doubles and minor.

We left St Clement Danes newly equipped (in some cases), revitalised and refreshed ready to teach bell handling in a safe and structured environment to all new recruits to ringing. So it was on my return journey, in a state of great excitement as I sat on the train, all I could see around me was a carriage full of potential new learners just waiting for me to apply all my newly learnt bell handling techniques and become fully competent ringers. 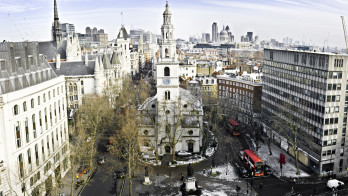