ITTS from a newcomer’s perspective

On Saturday 28th March sixteen new teachers and mentors convened at the church of Saints Peter and Paul in Headcorn. They had come from across Kent, Surrey, and Sussex and were diverse in respect of their ages and years of experience, but all were looking forward to a day of informative and useful instruction from tutor Graham Nabb on the subject of teaching bell handling. I was acquainted with the Learning the Ropes scheme through my involvement with the Cinque Ports Ringing Centre in Dover, where my mother had recently started learning to ring, and had read with interest the stream of letters to the Ringing World on the subject of ITTS, but was still a relative newcomer to the schemes and unsure of exactly how they worked in practice.

Fortified by tea and coffee, we began the day with the first of three theory sessions and four practical sessions. I found that this first session really set the tone of the course and helped me to understand better the aims and principles behind the schemes, as Graham explained that they look towards the teaching of disciplines such as sport to create a learning programme which divides whole movements into smaller movements and skills which continue to be practised once the learner has begun to put both strokes together and ring rounds. We soon saw in the ringing chamber how these principles would be put into practice, as over the course of the day Graham talked us through exercises which would help our learners to master the different components of handstrokes, backstrokes, both strokes together, and ringing up and down. We also considered how we might solve some common handling problems and how we might adapt our teaching style to suit each learner.

The day was something of a whistle-stop tour of an alternative approach to teaching which is rather different to traditional methods and probably rather different to the way in which most of the course participants had been taught; however some of its benefits soon became apparent. I could see that breaking movements down into small steps first would help the learner to maintain control of the bell and, just as importantly, continue to feel in control, improving their confidence as well as ensuring their safety. This approach would also help to prevent handling problems from developing and lay a good foundation for moving on to ringing rounds, called changes, and plainhunt.

Though it was clear that many of us found the day extremely informative, it also seemed that many found it very enjoyable. Contributions from the participants maintained a jovial atmosphere in the ringing chamber and a hubbub of conversation could be heard in the church as they shared their experiences over coffee or lunch. Several took advantage of this opportunity to ask Graham further questions, to the extent that on occasion he had to be very determined to reach the tea table at all!

As I left the church at the end of the course, armed with a resource pack to jog my memory afterwards, I think that I wasn’t alone in feeling that this job of teaching had become rather more complex but that I was now better equipped to become a more confident and effective teacher who could help her learners to succeed. Certainly I had been inspired to go out and begin practising with them – and this I did the following Saturday at the church of St Saviour, Westgate-on-Sea.

Here four of the new teachers met with mentors and learners for a day of teaching the beginnings of bell handling. The process of using exercises felt very natural and in practice confirmed some of the benefits already noted. Our activities and approach also drew admiring comments from a local ringer who was there as an onlooker. Most importantly, though, the learners made good progress and enjoyed themselves, reminding me why learners’ practices are my favourite practices to run. 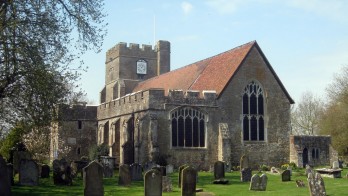