The course was held at St Mary the Virgin Church in St Marychurch Torquay. Parking was conveniently available immediately outside the church. St Mary’s is a ring of 10 which was new to me. Interestingly, the tower and 1877 original 8 bells survived some World War 2 bombing in which the rest of the church was destroyed. The church was rebuilt in the 1950s and in 1987 two additional trebles were added to make the current 10.

A group of 6 of us joined Les Boyce and Sheila Scofield for the day. Two of us had some experience of teaching and 4 others were just starting out on learning how to teach. I liked the work with the bell part raised, then the back stroke with constant feedback on ‘too hard’/heavy, too light/soft and good etc, and finally both strokes together. We were a mixture of method and call change ringers, so terminology sometimes differed. For example, call change towers tend not to call it back and hand stroke, but sally and tail. The idea of videoing the learner and showing it back to them, is also a very good one. Filming with a cheap tripod and digital camera only needs a couple of minutes to review the footage and then delete it. The session on correcting handling errors using the DVD and a practical demonstration was really helpful.

Over a good lunch in a café just down the road we looked at the theory of learning styles and completed a questionnaire sheet to decide whether we were visual, auditory or kinaesthetic learners. I had come across something similar before in Scouting.

At the end of the day we went up to see the bells and take the ties off. St Marychurch deploys a really good idea using bungee cords as ties; it is simple and quick.

The only downside for me was 'Death by PowerPoint' in some sessions – I do not know how we get over that? 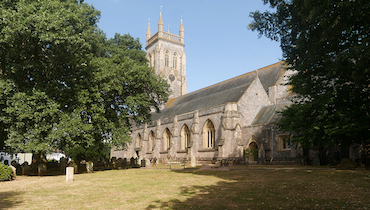