The ART Award for Innovation in Recruitment or Retention

“I realise this will never happen in my lifetime but how I think ringing training should be organised is this.” Clare McArdle’s words introducing an idea to set up a “Ringing School” in Birmingham, which became the Birmingham School of Bell Ringing. This award would be for Clare and the School jointly.

The School has just started its 3rd year. The objective was to solve various shortcomings in ringing training, including ringers being taught badly, not getting enough rope time, learning with inadequate bands, and not making progress, and by consequence to improve the quality of bands in the St Martin’s Guild by accelerating the delivery of ready-taught recruits. The School was not intended to replace training at individual Guild towers, but to create an additional pathway that would find its own recruits. The School was set up by the officers of the St Martins’ Guild and operates primarily for Guild members, but is now set up as an independent organisation (The Birmingham School of Bell Ringing CIO).

It runs every Saturday morning, at up to four different towers concurrently, taking students through the Learning the Ropes stages to level 5, with each tower approximately taking students through one stage. Doodle polls and online spreadsheets are used to register pupils, recruit and allocate teachers and helpers, and make sure that each week there is an accredited tutor, enough helpers, and the rights students at each tower. Although highly automated, there is still significant input from Clare to make sure it works.

The School has been a step change in ringing training and a much studied and admired initiative. It benefits from amazing support from other members of the St Martin’s Guild, but all those helpers have bought into what the School is achieving. It provides the opportunity for learning to teach, with St Paul’s school room adorned with ART certificates. Many students have said that without the School they would have given up, so the impact on retention is notable. The first student has just completed the whole course, through to ringing a quarter of Bob Minor.

A major decision and innovation was to charge the students. They pay £5 per session (usually two hours), and sign up for blocks of up to 10 lessons in advance. This covers the donations to the towers and training materials we give to them but most importantly it makes them value the training. In turn the tutors and helpers are very focused on providing good training – these are paying customers! We made the decision that all Tutors should be accredited so we took a lot of our members through ITTS Modules 1 and 2. This gives consistency in teaching and message, and adds great credibility to our marketing. Progress notes are maintained for all students so lead tutors can be changed without impacting on the students, and tutors prepare lesson plans in advance. All students, young and old, follow Learning the Ropes and we make a big deal over their milestone achievements. Certificates are presented publicly, and they receive a copy of the New Ringers Book on reaching the end of Level 1. The statistics speak for themselves. Since the School started we have had the following achievements:

Having enough helpers and accredited tutors is the limiting factor rather than getting enough recruits. We have had a few recruits who have come to us just by finding the School online, while others are recommended to the School by tower captains within the Guild. We have had to have a policy of only teaching people who will ring at St Martin’s Guild towers because the School is usually over-subscribed, although we have made exceptions where people from towers in neighbouring areas approach us at a time when we have a vacancy.

After the first year, we wrote a serious of articles in the Ringing World to explain what we were doing. One student, Tim Sunter, spoke eloquently about the School at the 2015 ART Conference, and both Clare McArdle and I have spoken about the School at the Central Council regional workshops in order to share our experiences and hopefully inspire others.

Most encouraging of all is students who have said things such as “This is the best thing that ever happened”, and “without the School I would have given up ages ago”. The School retains ringers by teaching them well, and enabling them to see a pathway to success. A selection of responses from students giving their experience of the School have been included with this submission.

The School students have made friendships and links through the School that have strengthened the rest of the Guild by increasing the number of people attending more practices. Students go to more practices not only to do more ringing, encouraged by the School, but also to see their friends. We thought this would happen – that practices would be improved by accelerating ringers through the learning phase.

Clare’s vision included the belief that students would be recycled as helpers when they finished the course and the School, as a result, will be self-sustaining. They would be free on Saturday mornings, would understand the objective of the School, empathise with the students, and be keen to repay the investment in them. This morning for instance I ran Tower A and three of the six helpers were Tower C students, proving the model. We may get to the point of all helpers being former students. The ‘Holy Grail’ would be creating a new teacher from scratch! 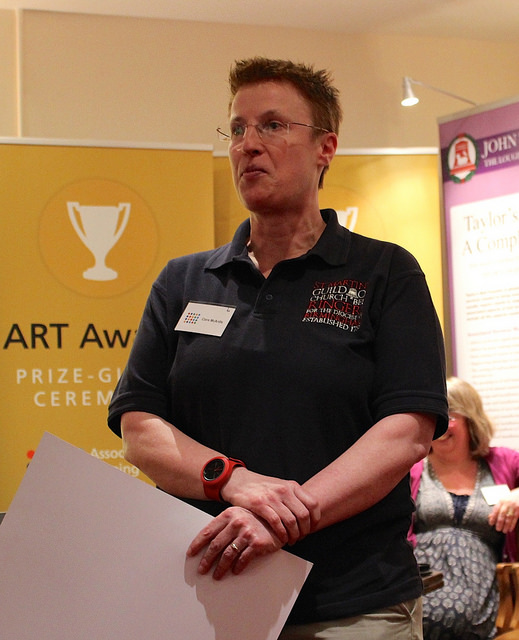