The Docklands Ringing Centre is a federation of thirteen towers in a compact area of East and South East London. As an area at the corner of three Districts in three different Associations, these towers have a lot in common with each other. However, being at the far end of their Districts, receiving meaningful support from other towers in the Districts, which can be over an hour away, is difficult.

The Bermondsey/Rotherhithe band have a regular weekly practice at Bermondsey, supported by around a dozen ringers, although not all attend each week. Just over a year ago, when we recruited a batch of five new ringers at Isle of Dogs help boost our numbers, there was limited help available from our experienced ringers to help with training the new ringers on a second practice night. Often we only had one or two instructors available.

The application for this award revolves around the innovations in the use of modern simulator technology that we have explored primarily to train new ringers at Isle of Dogs without the need for so many experienced ringers, and more recently to help lighten the load with teaching another batch of new ringers at Bermondsey.

Soon after Chris Hughes demonstrated the latest version of Abel with moving ropes at the Ringing Roadshow in September 2014, we upgraded our simulator installation at Isle of Dogs with a video projector. By moving some peal boards we had a perfect area for a 6 foot (1800mm) wide screen on the opposite wall. This produced realistic moving images of the ringers so that one experienced ringer could teach two or three new ringers at a time, without needing an experienced band.

Once we had taught each of our new ringers to handle a bell, we were able to teach them to follow another bell by watching the large screen. We were also pleased to find that without prompting the new ringers were not just watching ropes and ringing by ropesight, but they were also listening to the sound as well. Where necessary we started with four bells and worked up to six, but with 5 – 10 minutes practice people soon got the hand of hearing all six bells. They also found the display at the bottom of the Abel screen with numbers popping up quite useful to see how far out they were.

Once people could hear their bell and strike it consistently in the same place, we then moved on to use the simulator to teach them a range of new skills, gradually increasing in difficulty.

Initially we programmed each of our exercises into Abel using the ‘add method feature’ and inputting the place notation, but we forwarded these to Chris Hughes and worked with a small group of other interested individuals to develop these exercises into a set which were incorporated into subsequent releases of Abel.

Adapting our teaching approach to hold intensive sessions and targeted practices One of the key problems with the recruitment and training of new ringers is retention. It takes a lot of effort to recruit a group of new ringers and you don’t want to waste that effort by losing 90% of your recruits in the first few months. To turn this round and retain a high percentage of our recruits we moved away from the traditional approach to try the following:

With the new release of Abel, we have been able to give the new ringers much more rope time in an hour and a half target session, so they get more chance to perfect things straight away and we have observed that they make faster progress as a result. They also tell us that it is less intimidating, as they are less worried about making mistakes in front of other people.

We were able to have useful discussions about striking. Without prompting we found that several of the beginners were watching the striking display at the bottom of the screen to see how far out they were. It was particularly useful to slow the peal speed down to 4:30 and to have a discussion about counting your place and including an open hand stroke lead, and then to get them to count along, before gradually speeding up. It was much clearer than doing this in real time.

With our multi-bell interface we have found that two new ringers can practice ringing rounds at once, so long as they are not on adjacent bells - 2 and 6 work well. Once we got over this stage we were able to teach them to ring plain hunt on three, using just two experienced ringers and the three cover bells being added by the simulator.

Although it's not the same as ringing with real people, and our new ringers need a mixture of both, we are now able to do far more than would have been possible using traditional methods alone. We have effectively been able to set up a second practice night, without the need to find four more experienced ringers each week, who are prepared to ring just rounds, call changes, kaleidoscope exercises and plain hunting all night long.

We have also reinforced our teaching approach by producing a booklet for our ringers ‘Learning with the Abel ringing simulator’ containing an explanation of the various exercises that we use and some screen-shots explaining how people can set these up on their own.

We are also innovating still further by producing a series of you-tube clips, to accompany the booklet, so that our ringers have a complete package of material to help explain how to use the simulator and get the most out of it. An example can be downloaded here:

As part of our longer term plans to recruit and train even more ringers, we have also installed a largeTV screen next to the dumb bell and simulator at Bermondsey, so that we can also teach new ringers there in the same way and more efficiently.

We tended to follow the traditional approach and stop handling lessons once a new ringer could handle a bell on their own, then push them on to ringing rounds with the band. This meant that five or more experienced ringers were effectively helping each new ringer perfect their handling. We now commence our practice at Bermondsey an hour earlier, helping our latest batch of new ringers

perfect their handling in parallel with taking their first steps in ringing rounds. These handling sessions on tied bells and work on the simulator have significantly reduced the resources needed to teach new ringers to ring rounds, call changes and kaleidoscope, and they are ringing rounds successfully much more quickly, helping to maintain momentum and maximise retention.

One of the enhancements introduced in the September 2014 release of Abel is a suite of improved striking analysis tools. At Isle of Dogs we have sensors on all eight bells, so we can record a band ringing a touch on any number of bells (up to 8), and play the sound back afterwards, with a graphic display on the large screen at the same time. We can also import the file into 'Hawkear' the CAS Striking Analysis software used by the National 12 Bell Striking Competition, and mark the faults.

We were keen to get more visitors to come to our Isle of Dogs practice, so throughout 2015 we challenged any local Sunday service band in either the Lewisham District of the Kent Association; the Northern District of the Surrey Association, The North and East District of the Middlesex CA & London DG and the South West District of the Essex Association to enter a new and innovative competition. The prize was a cup and a bottle of Champagne. The rules were quite simple:

Three teams came along and practiced with us, which was not as many as we were hoping for, but we will be repeating the competition in 2016. The results of the 2015 competition were:

We also offered bands the opportunity to come and practice on their own. In May the North & East District of the Middlesex CA & London DG held their annual six bell competition at Isle of Dogs, marked by Hawkear. The results were:

We sent each team an analysis of the results, including a printout of their test piece and a .stk file so that they could play it back in Abel. With the Hawkear CAS analysis software you can analyse each bell and establish on average over the duration of the touch how much that bell is either late or early at each stroke. We did not find that any ringers were always noticeably quick or slow at a particular stroke. The problem was more one of variability.

In statistics ‘Standard Deviation’ is used as a measure of variability. We found this a much more useful measure. The ringers in the best bands had a standard deviation of less than 40 milliseconds. Quite a few ringers in the novice section had standard deviations of over 100 milliseconds, which is about a third of the gap between each bell. Having watched the ringers practice, generally we suspect that the ringers who had these high standard deviations were struggling more with their bell-handling, rather than having difficulty in hearing their bell, so that is probably the area that ought to be worked on first. It also tends to suggest that coaching of individuals to help them measure and improve their consistency is an area worth future development.

The simulator set up that we have and our ability to ‘fast track’ training is quite a marketable commodity and will appeal particularly to young people, as well as being of direct benefit to us. We intend to promote this more heavily going forward.

We took the opportunity to help Chris Hughes demonstrate the technology through filming for BBC’s ‘Click’ programme, although this was not subsequently shown in the UK. However a version was shown on the Arabic service. Our simulator set up at Isle of Dogs also featured on a local on-line TV channel and we will be using this and other opportunities to reach out to new audiences.

We will also be promoting our Striking Challenge competition more heavily throughout 2016, so that more teams enter this year.We will be completing our youtube videos and intend to make them publicly available, as well as an updated version of our booklet and we will be launching this at a presentation at the ART Conference in March 2016. 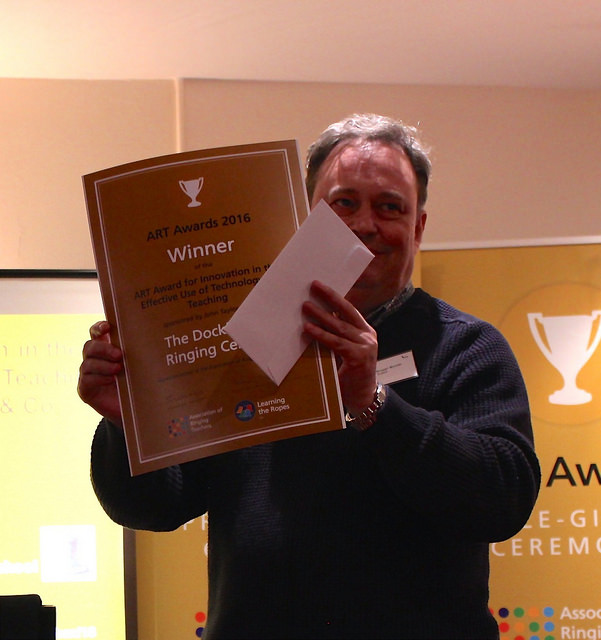