The ART Award for Inspiring Leadership in Ringing - Helen Nicholls

Helen learnt to ring at Thorne in 1970 and after moving house to Doncaster in 1973 she took up ringing in the then parish church of St George. As the Minster were not ringing regularly, she started to ring at Sprotbrough and has been teaching ringers for many years. She married David, a keen ringer from Rotherham, in 1981 and together they supported as many local practice nights as they could.

Being President of the Doncaster & District Society and with their Centenary coming up in 2021, Helen had a desire to see ringing in all the district towers that had no bands or that were currently silent. The Ringing Remembers campaign was happening just at the time when she got the idea and Helen decided to do some advertising and see whether she could get a few people interested. Although she’d been teaching for a long time, she also decided to attend an ART Module 1 course to get some new ideas. Suddenly the whole initiative took off and the few people she was hoping to recruit suddenly grew to a lot more!

After some of her Ringing Remembers recruits had got to the stage of ringing Plain Bob Doubles, Helen decided that there was a need to build her own training team. Her vision was for everyone to help each other with the teaching with herself overseeing. This went really well so she organised an ART Module 1 course with 12 of her ringers attending and started to focus even more on teaching. Helen then started concentrating on three towers with no active ringers ... Doncaster Minster, Conisbrough and Tickhill. Tickhill in particular gave Helen quite a surprise when she put an advertisement on Facebook to see if there would be any interest and on the arranged day 27 people turned up! At first, she wondered how on earth she’d cope but never one to fall at the first hurdle, Helen took along some of her team the following week to help start teaching. They have ended up with 9 regular ringers who have now all completed their LtR Level 1 and some of them have gone on to complete Level 2.

Helen has a very relaxed can-do attitude to teaching and encourages anyone to have a try. As she says, ”ringing is for everyone.” Because of this, she and her team teach a large range of ages – the young and the not-so-young!

Doncaster Minster, Conisbrough and Tickhill are now all ringing again with three of Helen’s Ringing Remembers recruits in line to be Tower Captains (awaiting meetings with the various PCCs.) The ringers all try to help each other out at different towers when they are short of numbers.

Helen had noticed, however, that none of these new ringers seemed to attend any of the Society meetings and thought that perhaps it was because they didn’t know anyone and felt they would be out of their depth. She tackled this head-on by organising a ‘Learners Day’ and invited teachers to come and bring along and support their learners for a relaxed day out and to meet others. 32 people turned up at the first one and it was so successful that it was decided to make it a regular fixture every other month. It is always well attended and thoroughly enjoyed by everyone and it has been noted that some new faces have now started to appear at the meetings!

Helen in the words of one of her ringers (and now fellow teachers):

“I have been ringing around 2 years and I can honestly say I would not have got anywhere close to where I am now (nearly completed LtR Level 5 and a teacher, and running my own tower soon) if it wasn’t for Helen Nichols. She puts so much of her time and life into teaching others and ensuring that bells around South Yorkshire will be ringing for years to come. She has inspired me to teach. She inspires every student she teaches and never ever gets frustrated. She is a credit to the ART scheme and really deserves recognition. She arranged for me and my wife to ring with Ben Parkinson MBE when we didn’t feel confident and had just completed LtR Level 1! She is amazing!”

Helen has also planned to complete a 12-bell challenge with the learners. As there are no 12- bell towers locally most of them have never had the opportunity to ring on 12. She is aiming to go to Derbyshire to do this.

Helen is still very keen to work towards completing her original vision of having a band ringing in every tower in the Doncaster & District Society in time for their Centenary next year. There have been a few setbacks along the way as there have been one or two safety issues at times with the bells but Helen is liaising with the towers concerned to try to solve the problems. She’s also put quite a bit of PR work in with clergy and PCCs to explain what it would involve to teach a new band of ringers at their churches and the time scales involved.

Through her hard work and dedication Helen has now gained a lot of help with the teaching and organisation of events. There are now regular Surprise practices and also a monthly Triples and Major practice which are both successful. In the meantime, Helen’s group of teachers and learners continues to grow and achieve. She is immensely proud of everyone for the work they have all put in and keen to make the point that she is just the ringleader who oversees everything! 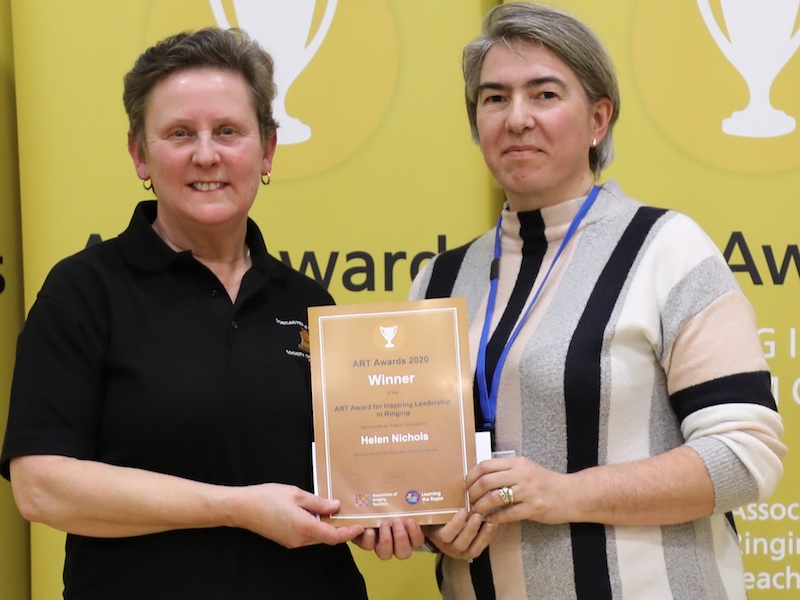