Elizabeth College is a secondary school and sixth form college, which runs three youth bell ringing practices a week (tower bells, mini-ring and handbells). These sessions are also open to youths from other schools as well as providing a 10-week introduction to ringing courses for Elizabeth College students.

A weekly, after-school tower bell practice has been taking place for the past eight years but only in the last fifteen months has the school installed a mini-ring and started an enrichment program within Years 7/8 (ages11-13) curriculum, of which bell ringing is a popular activity.

One member of staff and two volunteers from the nearby tower lead the practice sessions and 10 week course. Three students have received training from local ART Members so that they can help teach handling as well. They are waiting for an opportunity to attend an ART Module 1 course in the UK when travel is possible.

Although the Tuesday after-school practice is an Elizabeth College after-school club, it is also open to any island youths and we currently have three students from other schools who regularly attend. A number of adult learners, who are looking for extra practice of Plain Bob Doubles and Plain Hunt, also attend and benefit from the practice. The nearby tower, Town Church (whose bells we use on Tuesday afternoons), have recently launched bell ringing scholarships and, out of five current scholars, four have learnt to ring through Elizabeth College activities.

The Town Church band have frequently commented on how fortunate they are to have expanded in both numbers and ability, from a band that could struggle to ring Plain Bob Triples if some ringers were off-island to it now being a rare week that Cambridge Surprise Major is not rung. This surge in progress is mainly due to the number of youths that now attend and their ability to learn methods quickly and to ring them well. There have not been many quarter peals rung at the tower for over a year, that have not relied on at least one youth to make up numbers and often the youths ring to help the adult learners to score quarter peals in methods they have been learning. A third of the Town Church band are either youths from Elizabeth College or learnt to ring through the College and have now left the school but are still ringing at Town Church.

Over the past years Elizabeth College has been very successful in teaching bell ringing with weekly practices at a nearby tower and individual tuition and practice on a Saxilby simulator, which has been installed in the Music Department. However, there has always been difficulty in recruiting new ringers as the bells are away from the school and so students need to be convinced to attend an after-school session in an unfamiliar building with no idea if they will enjoy ringing or not. Elizabeth College have addressed this in three ways over the past year and a half.

The Maths and Music Departments designed a cross-curricular day for Year 9, which looked at various aspects of maths and music, using bell ringing as an illustration. The students all started the day together and did clapping rhythms at offset beats to show how music can be made with patterns and rules rather than melodies and tunes. Then they split into groups and rotated between three activities:

The day finished with all the students back together to watch a short documentary about the history of bells in general, including how they are cast and how change ringing evolved over time. The first time this event ran, it went very well and, unfortunately, the second event was cancelled due to COVID-19 restrictions but we are hoping to run the day again in this academic year. Not only does the day give every child in the year group a go on the ropes, in the hope that some may enjoy it and be inspired to join the bell ringing club, but it also showcases the complex mathematical side of ringing, to which some will be attracted but would otherwise not have had chance to realise was part of ringing.

The second recruitment mechanism has been the design and construction of a bicycle wheel mini-ring in one of the larger maths classrooms. The first incarnation was frankly somewhat rustic but it achieved its goal and five students regularly attended and learnt to ring called changes; two of the five were also inspired to start attending the tower bell practice. Over lockdown a new frame was made and the current version works extremely well and is rung weekly, with some students learning rounds and covering whilst others learn Plain Bob and even Stedman. Several very keen students have practised ringing two bells at once and can manage short bursts of rounds and called changes. Only one quarter peal has been rung on the bells to date but hopefully lunchtime quarter peals will become a regular occurrence once enough students are at quarter peal standard and we don’t need to rely on ringers from other towers. The mini-ring bells are doing their work for recruitment by being right to hand and, being only bicycle wheels, they are safe to allow the students to just have a go. Many students like to have a ring at the end of break and lunchtimes before their maths lessons start and, now that some have mastered the technique, they are helping others to get it right. The aim is to start an annual inter-house competition to encourage those who like to have a ring to learn to ring rounds and thus get them more engaged and enjoying ringing in a group, not just on their own.

Finally, the school has started a Friday afternoon activities session for Years 7 and 8 where they have the last two periods on a Friday to do something different to broaden their horizons. They select three activities and have a 10 week course in one before moving on to the next two. Bell ringing has become a popular choice with 27 signing up last academic year and 23 this year. This course has been fantastic for recruitment and has given us four new ringers so far who are all very keen. One in particular has zoomed through Learning the Ropes Level 2 to be close to passing their LtR Level 5 in just one term by attending both tower bell and mini-ring practices each week and spending almost every morning before school and break time on the simulator. Despite the disruption of lockdown two students have attained Learning the Ropes Level 5 and one has attained LtR Level 4 during 2020.

During lockdown the school moved to a virtual environment mostly using Zoom for classes. Ringing continued with the aid of Ringing Room and, although only a few of the students attended, those that did learnt new methods (St Simon’s, Stedman and Cambridge), which we then rang and quartered once our lockdown restrictions lifted.

Our local tower has introduced ringing scholarships and four out of five of the scholars who learned through Elizabeth College have become vital members of the tower band. The tower rarely has a service ring or quarter peal attempt without at least one of the scholars in the band and they are quickly overtaking the adults in the band in ability, leaping through methods onto surprise major.

The school embraces ringing and this was particularly evident when the mini-ring was installed and the chaplain blessed, dedicated and named each of the bells in a whole school assembly. It is a credit to the work to normalise ringing in the school over the past 8 years that this was not met with peals of laughter or jokes about bells (which I shall leave to your imagination); rather, it inspired a lot of interest in the mini-ring and ringing/bells in general, with more students coming to look at the installation. The mini-ring in its original and new form has been used in three open evenings for prospective students and their parents. Its light weight bells and wheels are ideal for 9/10 year olds to have a safe go, with many getting the hang in mere seconds!

We hope that, when COVID-19 travel restrictions lift, we will be able to welcome visitors to join the students on the mini-ring and benefit from their expertise and experience.

In the future, we would like to train up the existing youth ringers to a high standard so that new ringers will have a strong band around them to make rapid progress; this helps to keep them interested and keep the momentum of the group going. To begin to ring quarter peals on the school mini-ring and develop the bob-calling and conducting skills of the group further. 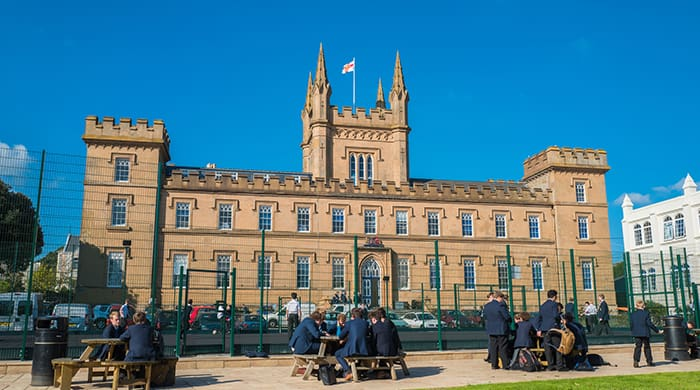