All fell silent (in terms of bells) until 2012 when Duncan Loweth was appointed to the Maths Department and started to train the students at the Town Church after school on a Tuesday. The Town Church is a short walk from the school and is where the school holds it services (Foundress day and Carol Service) and some choral concerts. Although the membership is principally from Elizabeth College we welcome students from all the schools on the island and at one point had students attending from 6 of the island’s schools. As with other activities some students stay for a year and others are still going from the beginning.

Each year 4-8 boys spend a week ringing during Investigation and Discovery week which, as well as being a good recruiting ground, has helped to dispel misconceptions about ringing and normalise it as just another activity offered by the school’s extracurricular program. In the early years a couple of local ringers helped teaching handling but are no longer available at the time we practice and once the boys were learning called changes have had to learn together, with at least 3 of them in the band at once.The band now has 10 students with abilities ranging from called changes to Reverse Canterbury Doubles. Some of the students call the changes or touches of methods and most have rung quarters with a couple having rung peals.

Our group consists of the teachers, parents and pupils of Lerryn Church of England Primary School and the Rector, PCC’s, ringers and volunteers of St Mary Bradoc and St Winnow churches. Our project is primarily to grow our church, the benefice churches and the churches across the Diocese, to show people of all ages that church can be fun and that one way of doing this is through ringing bells. To this end, we take our bells out to where the people are and involve them in ringing and show the family friendly fun and fellowship we can have with portable and traditional tower bells.

We started with a structured plan with clear, achievable objectives. We currently involve 30 junior ringers, and we have the same number of adult ringers of whom half are volunteers on this project. It is important that we achieve our objectives in a safe and thoughtful way. We take child protection and health and safety risk management seriously, and you will see that we now teach with the mini ring and dumbbell before moving on to the tower bells. We have another 34 year 5 and 6 pupils at two-other local primary schools who have asked to take part in the project in 2017 and 36 scouts and 14 cubs belonging to two scout groups who are starting their bell ringing badges in January and April.

The bellringing club has been thriving as an after-school activity for an hour once a week and is now in its fourth year. With help from the ringing headmaster, parents and grandparents, and members of the Guild of Devonshire Ringers, groups of up to a dozen pupils at a time aged 8 to 13 have been taught to handle a bell on the light (but rather tricky) six at St Petrock’s church in Exeter, which is close to the school. The pupils have also dabbled with ringing handbells and have performed for the school concert: ringing carols, rounds and named changes on twelve bells. The pupils (with helpers) have rung St Petrock’s bells at the start of their school fete on Cathedral Green. On two occasions the Guild mini-ring has been set up on the green for the fete and been used by members of the school and other ringers.

The Abingdon Society of Bell Ringers has been very successful in recruiting young people. We find that now we have a thriving group of young ringers, it is not too difficult to persuade other young people to come and see what we do and possibly to have a go. We often organise visits to the church and bells for groups of Scouts, Guides, Cubs and Brownies as a means of exposing young people to bells and young ringers. Interestingly, 18% of our current young ringers are the children of lapsed ringers, who, while supportive, are not keen to resume regular ringing themselves.

The young ringers are all by recruited local towers – as yet Bedfordshire doesn’t have a co-ordinated recruitment strategy – and they come mainly from 6 main centres where they are taught bell handling and learn to ring as part of the local band. We fill a key need because we can often provide opportunities to advance that aren’t available to them locally. This may be about advancing from Plain Hunt to Plain Bob but it can also lead to achievements such as a complete band of young ringers achieving very good quality Cambridge Surprise Major which is impressive to witness. One comes along because it’s fun although she can’t remember the names of the methods she can ring!

With these regular practices, it has been possible to focus much more on enabling those attending to progress, both individually and as a group. On arrival each young ringer is asked what they have been ringing at their home tower since the last practice and there will be at least one opportunity during the practice for each of them to work on this or to try the “next thing” (in consultation with their mentor as appropriate).

St Mary’s Brighstone, Isle of Wight: is a rural village with a light easygoing 6 and a tradition of ringing regularly on Sundays with a mixed aged band. We hit a crisis 3 years ago: a family of 3 ringers were moving away, so leaving us short. To boost numbers we held a ‘taster session’ in the February half term holiday, to include but not exclusively target pupils of the village Primary School. We felt we had good response giving us four 9-10 year olds attending the school, mostly Brighstone residents. Things changed dramatically when we were asked if the youngsters might ring for the monthly school service in Church; we ring upstairs with a glass screen looking down into the nave, with the ringers clearly on show. This proved to be a great recruiting sergeant, as the youngsters could show off to all their friends! Our numbers soon increased to 15 pupils and we ran out of practice night: so we got a simulator. 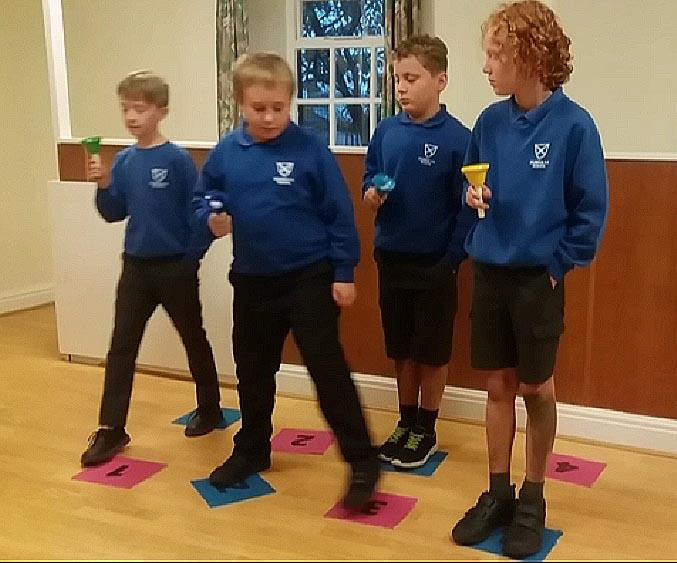 Take HSE and safeguarding seriously. Many older ringers are scared of protection issues and don’t want to get involved in permission to ring forms, registers etc.

Be flexible and understanding about timings of practices and fit in with school and children’s timetables.

An active ringer/teacher at the school is needed to walk children to the practice and take responsibility for the club within the school.

Recruit helpers who are confident in handling young people – those who have worked in schools or in Scout and Guide groups are ideal.

You have to enjoy teaching children and have a passion for developing the next generation of ringers, even if they aren’t ringing with you in 5 to 10 years time.

Be creative and have FUN!!!

» Return to read more about other groups you can work with

» Return to read about ideas for recruiting ringers