Frequent one-on-one sessions are the best way of teaching a new recruit how to handle a bell competently and safely. To avoid disturbing the neighbours this is often done using a tied bell. However, the addition of a simulator even at this stage of the learning process has the following benefits:

Once they have practised these exercises using the simulator, new ringers will be ready for the daunting task of ringing open rounds with a band, and they are unlikely to go too far wrong. It can be very demotivating at this stage to ring with others for the first time with insufficient practice and preparation beforehand and to find they cannot do it.

An example – changing the speed of the bell

Monique was watching the moving ringers at this stage and you may have noticed that she was grabbing at her sally a bit so it was too fast and the backstroke was correspondingly slow. We showed her the striking analysis which proved this. After this clip was taken we asked her to turn away from the screen and just listen. Almost magically she adjusted the timing of her pulls to get her H/S and B/S spot on. We were all so pleased. She loved ringing with the simulator. When we next followed up with ringing on three real bells she proceeded to ring dodging in 2-3, under at B/S, really well.

Three blind mice
Start with rounds on just three bells, as this is easier for the new ringer to pick out their bell. Increase the number of bells as they hear their bell and become more confident.

Following
Practise ringing rounds at a steady speed before trying to ring the bells open. Get your ringer to follow you but allow the computer to put in the sound of the remaining bells.

Bell Control
Ringing slowly and even setting every handstroke and backstroke in preparation for ringing rounds on open bells and waiting for other ringers. Allow your student to ring different bells to each exercise in order to develop bell control.

Quicker and slower strokes
Change the speed of ringing on the simulator (e.g. 2h 30m and 3h 30m peal speed) to practise ringing at different speeds (equivalent to moving down or up a place) including taking out and letting in rope.

I’m sorry I haven’t a clue
Let them ring one bell to an even rhythm then turn the sound off for several blows and see if they have maintained the beat. Alternatively you can turn the screen off if they are watching it in order to see how they manage without.

Shadowing
Two bells are rung at the same time. The learner’s bell is silent and the learner tries to ring in time with an experienced ringer on the other bell. This helps the learner get used to the feel and movement of ringing. Not an exercise to be performed on open bells!

It is also possible to practise raising and lowering, as the latest versions of the software can drop from double clappering to single clappering as the bell lowers, in a somewhat realistic way, if a ‘bottom dead centre’ sensor system is used. However, it is not possible to mimic chiming. 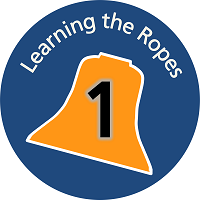 Safe and competent bell handling including raising and lowering a bell.