Change ringing on handbells, with a bell in each hand, is clearly an extension of tower bell change ringing. That said, there are undoubtedly some people who have practised method ringing on handbells before learning to handle a tower bell, but they must be a very small minority. Tune ringing, on the other hand, attracts many people who have never rung tower bells and never will. A set of bells are seen, together, as a musical instrument on which the ringers perform. Large bell orchestras with 40 or more participants and over 100 gleaming bells can produce an amazing performance, utilising different techniques (ringing in-hand, off the table, with mallets) to produce different sounds, ringing from the same staff notation as any other instrument. At the other end of the tune ringing spectrum is the tower-bell band who dust off the old box of ten or maybe a dozen handbells from the cupboard in the ringing chamber and go out at Christmas, around the pubs or care-homes. This would probably involve ringing by numbers, with some basic but clunky harmonies.

So what of the audience, if any? Change-ringing on handbells is mainly for the benefit of the participants, unless perhaps at a ringers’ event where the complexity of what is being achieved would be appreciated. Non-ringers may enjoy the sound of the bells, but might have little appreciation of what is going on. Tune ringing, on the other hand, can be appreciated by a much wider audience as they recognise the tunes.

Can the two co-exist or are views polarised? A method ringer can be transfixed by complicated change ringing, marvelling at the brain processes which are taking place and wishing they could emulate the performance; for some of them tune ringing is a poor relation. Tune ringing, though, can engage a much wider audience who can more readily appreciate the skill involved. Tune ringers may well consider method ringers as pursuing an art with few external benefits.
The bells themselves may be set up differently.

Method ringers ring the bell up (for handstroke) and down (for backstroke) but tune ringers may prefer to ring in one direction only, and to avoid the risk of a double strike the springs may be set one-sided, making the bells unsuitable for double-sided change ringing; the handles too may be stiffened. Whether this problem is real or imagined, most sets of handbells are probably used for one purpose or the other, with little overlap.

To end with, a couple of quotes from some of the friends with whom I practise change ringing:

“I’ve done both tune ringing and methods on handbells and enjoyed them both. Christmas carol handbell ringing in a rowdy Saturday night pub, collecting for charity, was great, but I wouldn’t be able to keep right in a method in the same location!”

“It depends on the situation, but the greatest pleasure I have had with ringing handbells was helping perform Christmas carols in hospital wards on Christmas Eve. The appreciation was overwhelming. I don’t think method change ringing would have elicited the same response.”

Maybe there’s a place for ‘God Rest Ye Merry, Gentlemen’ at the College Youths’ dinner in the future! 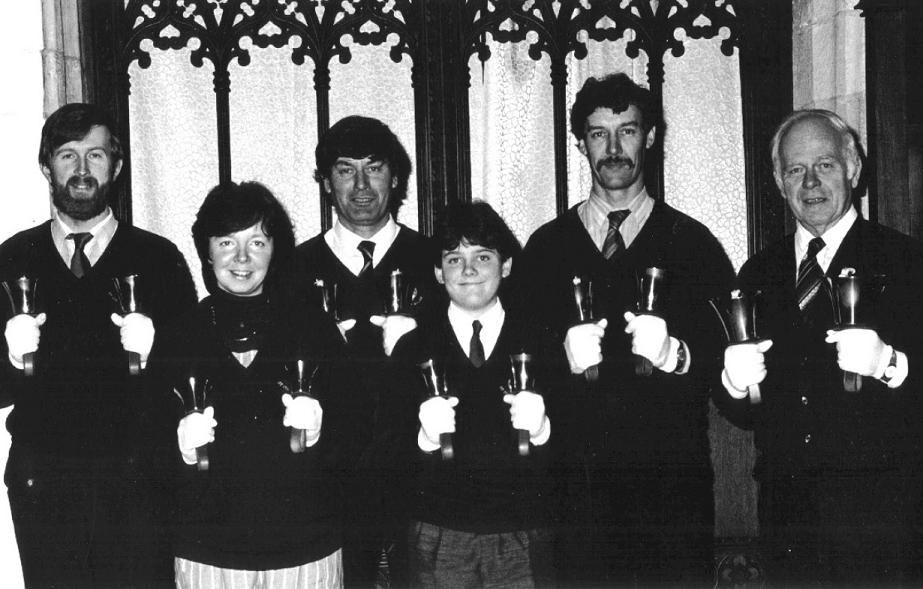 The St Columb tune-ringing band (including Phil) after performing in church about thirty years ago! 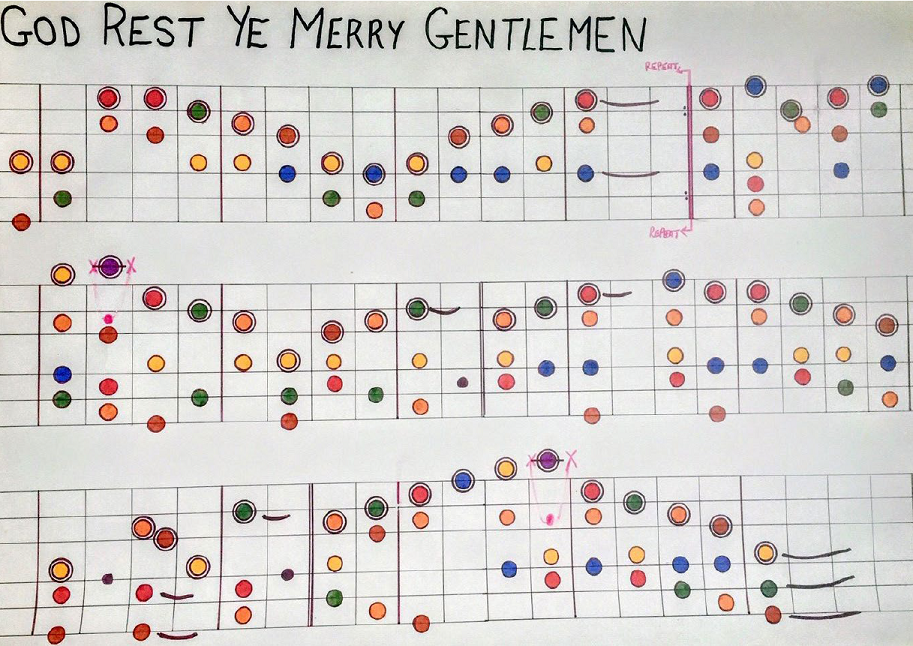