When we were unable to ring in church and as a Tower Captain I started to be concerned that some of our ringers might lose interest and not return – none of us are well established ringers so I spent some time considering Ringing Room which is an online virtual ringing platform. Having set up a virtual tower and taken a look, I thought I could get the same practice out of Mobel … but without the incentive of needing to know what I was doing in a practice next week I didn’t bother as I thought whatever happens I will have forgotten again by the time we eventually get to ring! However, as time went by and the possibility of ringing in a tower became even more distant I spent more time considering Ringing Room.

I joined the Ringing Room Take Hold Lounge on Facebook which is a lovely group from around the world, both experienced ringers and less experienced who were all embracing the virtual world. I found a group on a Saturday morning organised by Vicki Chapman where there was definitely ringing at my level which I could join in. What a great group of people ringers are as there are people who come along just to help us less experienced ringers and they are all greatly appreciated. I started to become enthused about my ringing again and decided I needed to pass this on to our band of 15 of whom only 3 are Facebook users. It took a while to get our band interested mainly because the technology caused problems. After several one-to-one sessions on how to tile windows, see everyone on Zoom, find the ropes when suddenly some of them have overlapped or hidden completely we did eventually get 7 ringers interested. However, of these 7 we had 3 who could Plain Hunt in the tower and the other 4 were still on Call Changes. We muddled around for a few weeks, lost interest as none of us could set people right if they’d gone wrong but then one week, I spied a friend from further afield on the Saturday ring and he said he would join our band on a Thursday evening.We started to move on leaps and bounds when Mick Howes joined then Alan Bentley became available and Jack Pease so some of those ringers who could only do Call Changes a few months ago have moved on to Plain Bob Doubles. We have recruited friends who have never rung with us in a tower who are now ringing Plain Hunt. I have even recruited friends and relations who have never rung before who have begun to understand and ring Plain Hunt. From these new recruits I have two ringers who will be taking up ringing when we get back into the tower.

The thought of keeping our band together and not losing anyone because they had found other hobbies was enough but then 50 Virtual Ringing Things came out. I am a great fan of this scheme – being one of the first to achieve Gold in the original 50 Ringing Things and helping with a new one in progress for groups of people I was delighted to have the challenge of a virtual one. I signed up as soon as I could and like the original one some of the things I had already done so it wasn’t difficult to do those again especially with all the groups I was ringing with.

The Handbell section might have been tricky but as we can only ring one bell in our tower due to the size and lack of ventilation we located the branch handbells before Christmas and with a little help from Alan I was able to teach four of our other ringers to ring some patterns and Christmas tunes for our Christmas services.

There is also a section for using a Simulator which we are fortunate to have installed in our tower though following our Bell Restoration we have not got to grips completely to find out what it is possible. Having bought the Abel programme I was able to try out some of the Things on my computer at home and it is fascinating what more you can do on it compared to Mobel which is what I use to practice my methods as much as I can.

The section for Ringing Online was the easiest as I am doing so much of it but there were all sorts of things to try out which I hadn’t thought of.

As for the final section called Tail Ends that really stretches the mind and makes you think outside the box.

My online experience started because I wanted to keep our band ringing but the 50 Virtual Ringing Things has given me back my interest in ringing beyond just going down to the village tower once a week, ringing a bit and coming home.

If you haven’t already joined, I highly recommend it – it doesn’t cost you anything other than time and enjoyment. 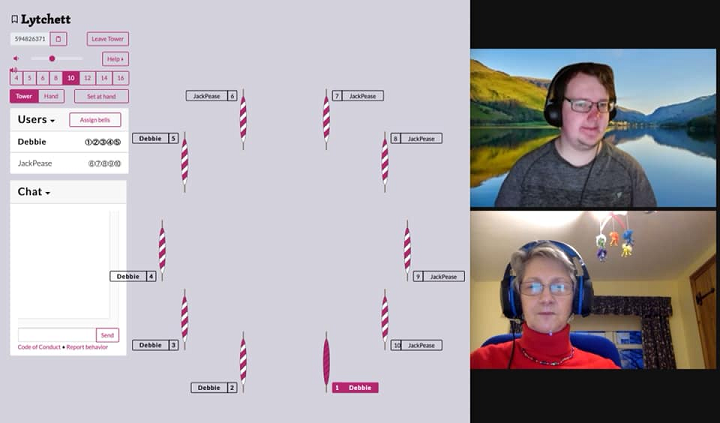 Debbie with the help of Jack Pease ringing Call Changes on 10 bells (five each!)