Timing is everything in ringing, but it was not for the normal reasons that that I was pleased to discover that an ART Level 1 – Bell Handling course was being held in late February at Ticknall, a local tower in my area. As an experienced ringer who has taught learners periodically for 40 years, I am about to help teach a group of children from Derby Cathedral School and now seemed a good time to calibrate my teaching approach against what is considered current best practice as espoused by ART.

Much of the introductory talk covered familiar ground. We know that learners progress more quickly when exposed to frequent practice, that individuals vary in the way that they learn, and that a well-structured and interesting approach to teaching is likely to produce better results. In a similar vein we were introduced to another of ART’s teaching principles, the Whole-Part-Whole Approach, that breaks down the relatively complicated action of handling a bell into a series of small ‘parts’, each of which needs to be mastered to at least a basic level before they are combined into the ‘whole’ action. Then, as the almost inevitable handling errors appear, it is appropriate to identify which ‘part’ is causing concern and go back to rehearsing it in isolation. By iterating through this loop, the learner should be able to handle a bell more quickly and more confidently, without losing sight of the goal which is to master the ‘whole’ action with a good and safe style.

But the revelation for me came during the practical sessions that followed, because they made clear that my long-established approaches to teaching fell some way short. Central to this was beginning to teach with the bell down, learning to raise it and then moving on to handling the backstroke in an almost subliminal progression that avoids clattering the stay and any of the fearful repercussions that can create. Several specific exercises help the learner gain confidence, such that handling the full backstroke can be achieved very rapidly. So too with learning the handstroke; ringing below the balance, using a dummy tail end, alternating the responsibility for catching the sally between the teacher and learner, all seem to make very good sense.

A second practical session was devoted to ringing up and down, with the emphasis here being that this is an integral part of the handling process rather than something that is learned much later on. Then it was time to bare our souls and watch our fellow ringers in order to identify if they had any persistent handling issues and, if so, how they might be remedied by retraining the offending ‘part’. This was a particularly salutary experience because very few ringers have a perfect style and if handling errors can be spotted early, they are much easier to correct. It’s a sad fact that many learners are allowed (even encouraged) to progress, despite some traits that will ultimately preclude them from accurately striking a bell in rounds or call changes because the bell is not entirely under control.

I’m hoping that my ART experience will improve the way in which I teach and it seems to me that any teacher will likely gain some useful ideas by adopting their approach. Ask me in six months’ time how easy it is to put into action and whether the learner outcomes are better as a result.


I wasn’t quite sure what to expect, but the day turned out to be very informative and actually good fun despite the somewhat dry subject matter. There was a total of 10 of us attending the course, working in pairs, which was designed to give us the skills to teach bell handling from scratch and also the ability to spot and correct handling issues.

The course was well paced with a mixture of practical work on Ticknall's light 10 (Tied for the benefit of the neighbours), some Powerpoint slides and a couple of videos. At the outset it felt like we were in for a long day (10:00am to 4:00pm) but it flew by, in fact we were all so involved by the middle of the afternoon that we even decided to forgo the afternoon tea break so that we could cram a bit more work in. A useful pack was provided containing some worksheets and ART logbooks, a copy of Learning the ropes and some other useful handouts.

I mentioned earlier that I wasn’t sure what to expect, but I was pleasantly surprised, I had previously heard about the “bell down teaching method” and was initially a little sceptical, this certainly was not how I was taught to handle a bell all those years ago, but having now tried it, it is clearly very logical and importantly safe, yes it is different to how we did it 20 years ago, but I think it is a better option, and I now can’t wait to try it out.

There were a few surprises towards the end of the course, which were very entertaining and a bit scary for some people, but I am not going to say any more about those as they would be spoilers, I did however have to confess to a handling issue I have, and have it unpicked by everyone else, it will be interesting if the ringers at my home tower have ever noticed it, they won’t now because it is fixed. (Honest)

I’d like to thank Moira and the team for putting it all together and Simon Melen for preparing the bells and the simulator. Looking forward to the next one.

I learned to ring about 50 years ago and have been trying to teach others in the same way that I hazily remember being taught but did feel under prepared and under-skilled. I booked on to the course at Ticknall with some apprehension.

Moira made the ringing teaching method easy to understand as it progressed and it is obviously heaps better than what I had been trying to do. I enjoyed the day very much and have already tried some of the techniques that I learned. I look forward to introducing a new generation into the joys of ringing.

I thoroughly enjoyed the session. Moira Johnson was our instructor and she was brilliant from start to finish. There was a lot of information presented in a friendly and understandable way, I left feeling much more confident and positive about helping others learn to ring. Thank you for the experience. 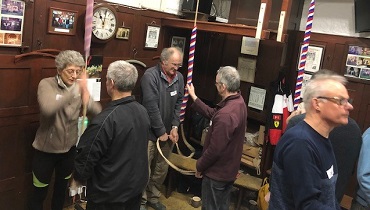 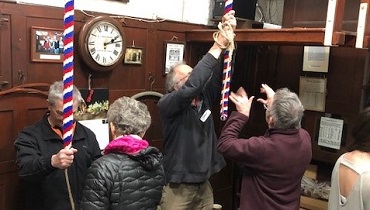 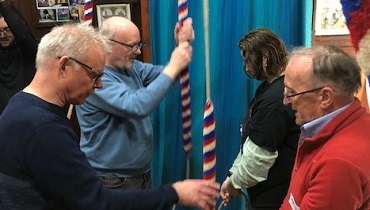 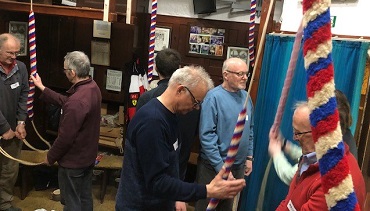