The ART Conference went to Derbyshire

The ART AGM and conference was held at Hilton in Derbyshire on Saturday 14th March. As at the 2018 and 2019 weekends, this was followed by a further day jointly hosted by ART and Central Council’s Volunteer and Leadership workgroup.

Perhaps the biggest surprise, looking back at the weekend, was that it actually happened. There had been discussion about cancelling, but such events were neither banned nor even discouraged by the regulations in force at the time, though a mere 48 hours later things would have been very different. As it was, we waited anxiously as people started to arrive, and were pleasantly surprised that on both days there were remarkably few cancellations. This says a lot about bell-ringers – though whether it is a compliment to their resilience or a rather less favourable comment on their misplaced sense of invulnerability is debatable.

ART’s Chair, Lesley Belcher, welcomed us then led the AGM which included a very heartening report of progress in 2019. The very high number of learners who signed up to ‘Learning the Ropes’ in 2018 was undoubtedly in part driven by the highly successful Ringing Remembers campaign, but Lesley reported that numbers remained very high for 2019 too. A large and growing number of ART Modules continue to be held in UK and overseas, and it was particularly encouraging to see a big increase in the number of Module 2s, which had previously been rather lagging behind the more popular Module 1.

The quantity of resources available on ART’s various websites continues to grow, as does the number of other courses that ART is developing and holding.

The AGM was followed by a coffee break and a chance to wander around the various stands, after which came the first plenary session. This was an inspiring talk aptly titled ‘Mountains of the Mind’ by Bonita Norris, one of the youngest climbers to have scaled Everest. At a time when recruitment and retention is on our minds, it was fascinating to hear her recount how her chance attendance at a talk on climbing inspired her to embark on a journey that led her, a mere two years later, to the summit of the world. She was helped by the example and advice of her many new colleagues, and told us of the many times she wondered if she should give up but was driven to keep going, even in the ‘death zone’ above 8000m when bitterly cold, exhausted, and struggling to put one foot in front of the other.

This was followed by a plenary session ‘Taking Striking Seriously’ by Richard Grimmett. There was another session on this topic as one of the three concurrent sessions held in the final timeslot before lunch: ‘Striking it Right’ by Colin Newman. The inclusion of two presentations on striking was a deliberate move by ART who want to place more emphasis on the teaching of striking. For the same reason, in the afternoon Cathy Booth hosted a panel interview for her Fun with Bells Podcast about the importance of striking and what you can do to improve it. Look out for this episode featuring Stephanie Warboys, Richard Grimmett and Colin Newman in April.

The lunch break in this busy day also included a Teaching Forum hosted by Pip Penney and an Assessors’ Meeting chaired by Paul Lewis. ART is well aware of the imperfections in its systems, one of which was the unevenness of standards when, of necessity in the early days, test lessons for those wishing to qualify at Module 1 or 2 were assessed by their mentors. This task is now carried out by assessors, who had a lot to discuss about how best to carry out their duties.

We regathered for the final plenary session, ‘What would TripAdvisor says about your tower?’ (Alison Hodge and Tony Crabtree). Happily, given that we were at the end of a long and very full day, this proved to be a highly entertaining session in which we were asked to rate our tower from one to five stars on a range of criteria. None scored an overall perfect 5, so we all had plenty to think about and take home for consideration.

A fuller report on each session, plus links to live-streamed videos and powerpoint presentations, can be found at: https://ringingteachers.org/news/ART-Conference

Many then stayed on for drinks and the ART Awards prize-giving ceremony hosted by Stephanie Warboys. It was heartening to hear the many nominations in each category – there really is an enormous amount of first-rate work going on. Details of prizewinners can be found at: https://ringingteachers.org/recognition/awards

This is the third year that the Central Council’s V+L workgroup has combined with ART to host the second day of the conference. The first time that this occurred (Royston, 2018) caused a few raised eyebrows, as ART’s relationship with CCCBR has not always been the smoothest. But those days are long past. The various organisations that play a big part in world-wide ringing, including but not limited to CCCBR, ART and The Ringing World must always retain their independence (which includes the right to robust criticism when needed), but happily they are now working far more co-operatively than in the past.

The Sunday conference has always had a single focus, in contrast with Saturday’s breadth of choices. This year is was Recruitment and Retention. I find this topic fascinating as well as important, particularly given that in my home territory (ANZAB) we find recruiting the bigger problem, while in UK it seems to be more retention that often presents the issues.

Tim Hine, the head of the V+L workgroup, welcomed us and explained the way the day would work. ART already has a Recruitment and Retention resources.

This led Matthew Lawrence to develop a day workshop that could be run in any area that wanted to do something about recruitment and retention. This workshop was trialled in Sussex on February 29th. Matt spoke next giving a brief outline of the course. He explained that for most of the rest of the day we would split into groups, each of which would experience the workshop. We could then spread the idea in our home areas and encourage local groups to run the workshop. We could also share our ideas and provide feedback.

Because there were so many attending, we split into four groups, each with a particular slant:

These four workgroups then met and discussed the whole topic of recruitment and retention in three highly-structured sessions. We were invited to exchange ideas about each of ten points; this ‘ten-point plan’ can be downloaded from 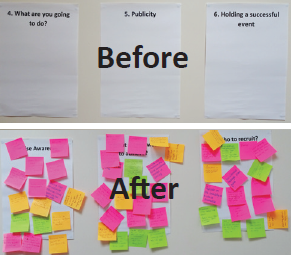 Each point of the plan, starting with point number one – ‘Raise Awareness’ has numerous sections and subsections, sure to prompt discussion and to give you ideas about what might work for your particular situation. The success of this approach is illustrated by the ‘before’ and ‘after’ picture, which reminds me a bit of an advertisement for a hair-restoring tonic. ‘Before’ the discussion we were all rather bereft of concrete ideas about how to deal effectively with each of the ten points. But ‘After’ we’d talked through the suggestions on the sheet and added our own, our heads were positively sprouting with new ideas.

I attended the ‘Branch and Association’ group, excellently lead by Vicki Chapman with the assistance of Deb Baker, who was also in charge of keeping us in order in terms of sticking to the tight timetable and not hogging the conversation. Happily the vicious-looking kitchen utensil she brought along to quell any possible rebellion was not needed!

After three sessions in groups we gathered for the closing plenary sessions, which included a talk from a real ‘new recruit’ (Mary Jones, the ‘Accidental Ringer’), a real-life example of the ten-point plan being put into action, and a quick feedback of the major points raised in each of the four groups. All-in-all it was a great and inspiring weekend involving a lot of thinking, ideas, and inspiration.

All that is quite hard work, so I’m almost looking forward to my 14 days ‘self-isolation’ on return to Australia!

This article was originally published in the Ringing World