Sometimes you hear people say that bell ringing doesn't have a recruitment problem, it has a retention crisis. Which is hard on those who struggle to get new recruits into their tower, but there is some truth to this.

High quality, intensive bell handling training, typically has a retention rate of about 80% Many more ringers are lost in the period after this early bell handling stage on their way to being able to ring their first couple of methods inside. Providing the right opportunities and support to your new ringers during this stage is vitally important.

Joining the practice after all the attention of bell handling lessons can easily lead to slow progress and loss of enthusiasm. Maintain momentum and provide as much practice as you can, at your own tower, with other towers (be selective) and through your local ringing association.

Be careful though. Don't be tempted to push them too far, too quickly. This is the time to get the foundation skills, which we take for granted, right so that your ringers can progress more quickly and further later on. Avoid the mistake of jumping from call changes straight into Plain Hunt, in the belief that this will make them feel they are progressing. Confidence can easily be lost and along with it, the ringer too.

As the new ringer in the tower, they may well be the worst ringer for a long time. How demotivating is that, particularly when things aren't going right. Create group teaching opportunities - the peer support and opportunity to see that they are not the only one who finds ringing difficult, keeps people coming back.

Create a sense of progress and celebrate achievements

Just as more experienced ringers have goals to keep them motivated (such as ringing a quarter peal of a new method), so people who are new to ringing feel a sense of achievement from attaining something they've been working towards. Set realistic goals and celebrate success in ways that suit the ringer and the band.

Find out what makes your new ringers click, then give them what they want - a role within the band and teaching and opportunities that suit their aspirations and motivations. It's much harder to drop out of an activity and stay home if you've got lots of friends doing it.

Regular simulator sessions focused on developing and finessing foundation skills are a way of developing a number of ringers with only a few helpers.


Most new ringers are able to hear their bell with just a little of the right practice. All too often they are conditioned to "watch" so their natural listening skills are suppressed. A simulator is a valuable tool to make best use of helper time, and is very useful in the transition from handling sessions to ringing with real ringers and beyond.

The challenge is perfect for those who can handle a bell safely and ring rounds competently.

Although Annie's ringing progress has been at quite a stately pace she picked up a 50 Ringing Things booklet and has been on a series of amazing adventures with ringing ever since, she goes all over the place ticking off the challenges.

Annie rings respectable call changes at her home tower every Sunday and never misses a practice, but is realistic that she's unlikely to become an advanced change ringer any time soon, so she worked out that challenges such as 'ringing a themed method' or 'calling a quarter peal' weren't going to be possible. She then wrote out a chart with all the things she could do and went for it.

Annie has got her bronze certificate and she is going all over the place fulfilling challenges. She absolutely LOVES the scheme and just texted me that this weekend she had gone along to a practice at St Alban's Abbey (ring at a Cathedral or Abbey) then drove to a nearby village to attend a village fete where the Charmborough ring was set up so she could tick off 'ringing on a mini ring'.

She organised an outing for all of us (including making us ring at a lumpy 4 because she wanted to ring at a 4 bell tower), rang at a wedding, she's going on the next bell maintenance workshop, she cleaned the tower, is going to be ringing another quarter peal on the tenor next month, made a ringers' tea, raised funds for the tower, given a talk on bell ringing to a group. Basically she is targeting any of the challenges which are attainable by someone whose own personal ringing ability is at an early stage.

The challenge of becoming part of the group

First, ringers have been used to getting plenty of attention by themselves, making rapid progress, achieving their Learning the Ropes Level 1 within a short time and ticking off lots of things in their progress books. They're probably enjoying their success and are keen to move on to the next stage. If they then go along to a general practice once a week, they will be getting a go at something new such as rounds and Call Changes, or Kaleidoscope ringing throughout the practice, but as everyone else's needs have to be catered for, their progress will slow down.

It is at this stage that many promising ringers lose interest or become frustrated. ART receives regular emails from people all over the country who have been ringing for several months but who aren't getting many opportunities to develop their foundation skills. As they are not ready to join in with the methods that the rest of the band ring, they spend much of the practice sitting out feeling excluded. 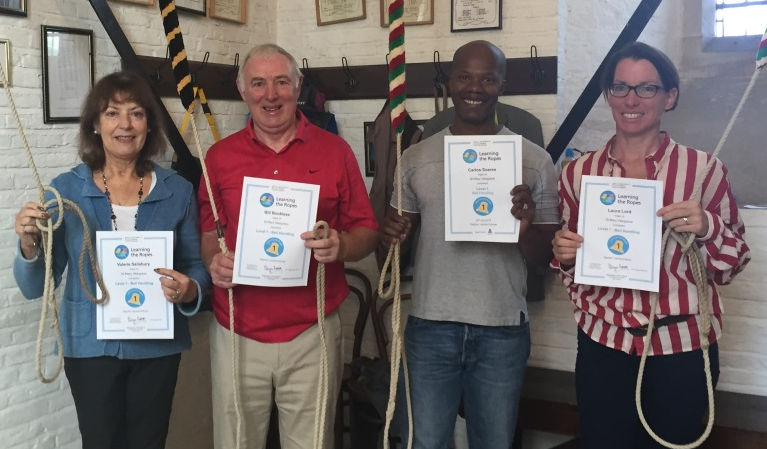 Learning the Ropes is a structured, progressive scheme to learn the art of bell ringing – similar to music grades or karate belts. Ringers get an individual Personal Progress Logbook and at the completion of each Level are presented with a certificate of achievement from the Association of Ringing Teachers. Ringers can see their progress and there are plenty of opportunities and methods to celebrate success.