Colerne C of E Primary School After School Club, and, Junior Church Bellingers ring at St John the Baptist Church, Colerne, Wiltshire, where children in Year 4, 5, & 6 are taught the art of church bell ringing. Starting with the elementary bell handling, and moving on to older children and elementary change ringing with adult helpers.

The activity started in the September of 2014 with a first group of children, since then we have evolved the method and style with which we have taught them to ring. Utilising the “best” of the Pam Copson way and the ART way to fit the way a small person learns.

The children in the initial Tuesday after school club vary in numbers over the school year - there are usually, 6-8 in the group as an average. Over the last 4 years we have had over 70 children who wanted to learn to ring. Learning change ringing we currently have 5 children. Please can you give an idea of the range of ages of those involved? The youngsters age range is from 8-10 years old in the Tuesday group. While we have carried on teaching methods and bell handling techniques to the children who can ring unaided at the start of the main Wednesday night practice, the eldest is currently 12 years old. If relevant, how frequent is the activity? The children ring every Tuesday at the after-school club during term time. Those children who have progressed to ringing unaided ring every Wednesday evening before the adult practice session.

The youngsters are known of in church circles, the Church Wardens and the PCC are regularly asking aboutthe progress of the children. When they are proficient in their ringing the children are asked to ring for the school Harvest, Christmas and Easter church services and occasional weddings. These are always a milestone in the children’s progress, they remember the weddings usually as they get financial renumeration! The village newsletter has occasional articles which recount the progress of the children in their learning.

Encouraged by our success in the submission last year this has prompted us to re submit this year to show what we have achieved throughout the year.

Within the school the children talk about church bell ringing, and we have a waiting list of pupils who want to learn. Recruitment is never an issue.

Success is measured in the fact that we always have an ever-increasing list of children who want to “give it a go”.

The children always have the opportunity to join the Wednesday group when they out grow the Tuesday group.

Since its start in September 2014, we have given the after-school group the opportunity for small groups of youngsters to be taught to handle a church bell. This was the original aim of starting the group. It soon became clear that some of the children had got the bug and wished to take their learning further. Those children who left the club at the end of an academic year, have a good foundation to build on, should they wish to take up ringing again, later on in life. While those who did want to take it further could join the Wednesday evening group.

The success of this group has been put down to the children enjoying what they do and discussing it with their peers in school, and their parents at home, in fact the parents are encouraged to see their children ring in the tower.

“Barriers” is a strange concept. We have always never seen things as barriers, but instead treat them as challenges which we have risen to, for example using sensibly sized boxes for the smaller children, so they feel safe while standing off the ground.

The use of social media and children is always a sensitive subject, which is why we use the Pam Copson progress cards/badges in preference to the ART scheme. We do use the school web site to show the parents photographic evidence of the youngsters in action. The simulator is used at every session and it is the use of this, which allows us to carry out these activities at any time of the day.

From our objective which we stated last year, our aim was to present a group in the local branch striking competition, which we did. The youngsters joined the adults in tower teams, and all the youngsters from the local towers joined to ring as an all youngsters team - which came higher up the ranking than some of the individual towers which they represented! Two of the youngsters we have taught have joined the local Guild Youth Team, hoping to get selected for the Guild Team, which will ring in the RWNYC! 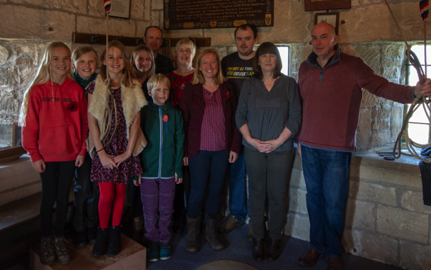 The youngsters ring for the end of term school services, which are held in the local church. Knowing that they have rung for the services is a great talking point in the school playground.

The progress card (from Pam Copson) is used to evaluate each child’s progress. The visual state of the card is an instant review of the progress of each child. The children enjoy colouring in and around the progress bells. The award of the specific badges is a great milestone for the children. They wear the badges with pride around school.

We have used the ART book as a lesson planner or review sheet among the teachers, if we need to plan what we do. The children really seem to show an interest in the cards.

Runner Up: The Yorkshire Tykes