Jimmy Yeoman’s home tower is at Exning, Suffolk. Jimmy learnt to ring in October 2016 and rang his first quarter peal on 16th September 2017, his first tower bell peal on 16 February 2018, followed by his first handbell peal on 11 July 2018.Shortly after he celebrated his birthday by ringing a peal!

Before Jimmy turned up to an Exning bellringing practice in October 2016 he had never had any connections with bellringing. He had heard about ringing bells and wanted to see what it was all about. To see what he has achieved in the two years (especially in 2018) since his first lesson is astounding. He is very active within Ely Diocesan Association of Church Bell Ringers and Suffolk Guild of Ringers.

Jimmy learnt to ring at St Martin of Tours, Exning, Suffolk. The small band of ringers usually ring Doubles and occasionally Minor. He just about taught himself how to plain hunt and then began to venture out to other local practices with some of the other Exning ringers. He then realised what the potential for this new hobby was. He improved his own handling style and took notice of any small piece of useful advice offered to him. Once he had rung his first quarter peal in September 2017, Jimmy began to make excellent progress and went on to complete the full Learning the Ropes syllabus. He is now storming his way through the LtR Plus and LtR Handbells schemes. He has also achieved his Silver Certificate for the 50 Ringing Things scheme. All of this is through his own drive and initiative plus some help from a few ringers in the wider area.

What really helped Jimmy was his first handbell lesson in January 2018 which led to him enrolling on the LtR Handbell scheme and being shown the benefits of Abel. His progress is due to all the ‘homework’ he undertakes using Abel and any other sources he can find. New methods are analysed until he knows the structure and place notation and the effects of bobs and singles; this is followed by a lot of practice using the motion sensors. When ringing he demonstrates very good striking and makes few method mistakes. He is always ready to take on board advice to improve his ringing and suggestions for new methods to learn.

Jimmy’s enthusiasm for bell ringing is apparent everywhere. Living in a Suffolk village the local transport is rather lacking so he relies on family and ringers for lifts. If you give Jimmy a lift you will have a journey full of discussion of bell ringing methods along with facts and figures about towers. He never misses an opportunity to support his ringing. When he visits his Grandparents in Birmingham he always looks up any local ringing and goes along to the practice.

Jimmy is a keen member of the Fen Tigers (Ely DA Young Ringers) and took part in the RWNYC in the final for the 2018 competition with the team coming joint fifth with a B grade. At practices and events Jimmy is always willing to help at any level. He has attended the ART Module 1 course and uses his knowledge and experience to help with the teaching of bell handling and foundation skills at Stretham Ringing Education Centre. Younger ringers especially like him to be there as he has a very patient but positive manner with them. This together with his cheerful nature make him an excellent role model for younger ringers.

To help other ringers make progress Jimmy has arranged and called several quarters in the local area.

He has never forgotten all the support he received from the Exning ringers and in February 2018 he entered a Dragon’s Den competition being run by the Newmarket Festival Committee, at Newmarket Academy, in the style of the BBC2 programme. Thanks to his excellent sales pitch Jimmy won £1,800 to be used to buy new bell ropes for both Exning and St Mary’s, Newmarket churches. On hearing that Jimmy would really like to ring at York Minster the judges contacted the Minster bell ringers and arranged for Jimmy to go along to a practice, which he did in August 2018.

To support his bell handling teaching he went round to the local Halfords in Newmarket and got a load of free old bike inner tubes to make silencers for Exning bells. These have been put to good use for the learners’ practices Jimmy has organised this year.

2018 has been a very successful year for Jimmy. In his teaching of learners, Jimmy has increased in confidence and experience and now readily gives constructive advice in both handling skills and tips to learn and ring new methods.

Having achieved his peal of 8-spliced in December 2018, Jimmy has plans to ring more spliced and is an enthusiastic member of our local Project Pickled Egg Group.

An aim for 2019 is to ring Norman Smith’s 23-spliced and he is busy learning all the methods required for the composition. Jimmy would like to widen his repertoire in methods and conducting on handbells.

As an active member at Stretham REC he is going to run courses on ringing Plain Bob and Surprise Minor. He also hopes to attend an M2 course and certainly has the potential to one day be a very successful Tower Captain.

Lesley Boyle writes: ‘I first saw Jimmy on his second handling lesson in 2016 and thought he would be struggling to progress with sort of tuition he was likely to get at his local tower – and was then amazed when he came to a District practice some months later, handling well, and ringing Plain Bob Minor. He ‘got’ the concept of Little Bob straight away and rang it a couple of times that practice. You just knew that each practice he turned up at thereafter he would be totally prepared in case the method he wanted to ring was called for. Attending the Birmingham Masterclass gave him many opportunities to push himself and inspiration to seek out more 12 bell ringing and good ringing. Yet his feet are firmly on the ground – though there are Surprise practices he could go to on Wednesday nights he continues instead to support his local 6 bell tower and help with handling and plain hunt doubles’.

Simon Linford writes: Jimmy was in my group for the Masterclass and he was clearly very able. I could and did push him into doing new things and he was soaking it all up. Most recently I was asked to call a peal for him at St Paul’s Birmingham, and although he wanted to ring a legacy set of methods for which I have forgiven him, he rang excellently.

Jimmy tells us about his Dragon Slayer experience!

'For a few years now, my school has run a “Dragon’s Den” style competition, in which students can bid for money from local businesses to fund their hobbies. After having four ropes break within about two months back in November, I decided to apply for some money to buy new ropes for my local towers of St Martin’s Church, Exning, and St Mary's Church, Newmarket. My entry consisted of a carefully planned computer-based presentation and a speech to try and win the “Dragons” round.

It was fairly nerve racking to begin with as I had never stood up in front of anyone before and delivered a speech, but as time passed I realised that they weren’t as scary as they appeared. During the presentation, one of the Dragons asked me where I would most like to ring and I immediately answered, “York Minster”. I never gave it a second thought at the time. After the presentation I was thrilled to find out that they were happy to offer £1800 between the two churches. Obviously, the other ringers and I were over the moon. As far as I was concerned, this was the end of it. Little did I know that a further surprise was in store!

A few months later, I was called into my headteacher’s office and to my surprise, two of the Dragons and my Mum were there. They gave me an envelope which I opened and read to find that they had secretly organised for me to ring at York Minster! I was amazed and so unbelievably excited at this. I am certainly looking forward to my trip! And meanwhile, our new ropes are making a huge difference to our ringing so I’m very glad I took on the Dragons!' 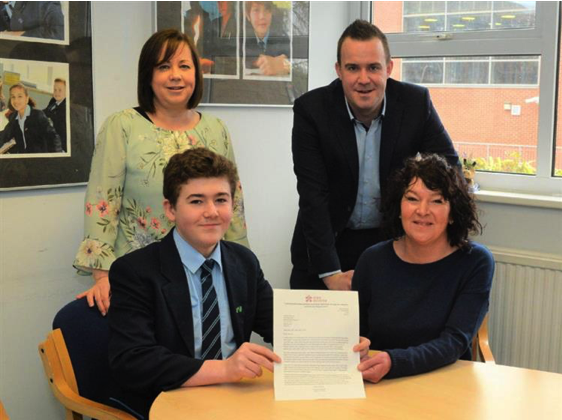 Jimmy Yeoman and his mother Vanda with Dragons Caroline Kerr and Alistair Thomson.

Fifteen-year-old Jimmy Yeoman made a pitch to the Dragons of Newmarket Racecourse, when the charity group Newmarket Festival Committee ran a contest at Newmarket Academy in the style of the BBC2 programme.