Kildwick Mini-ringers is an after-school club for children from the primary school adjacent to the Church. The club aims to give the children a comprehensive knowledge of all aspects of bell ringing, with the hope that some will eventually progress to become full members of the local Kildwick band. It was established in September 2016.

Numbers have varied from year to year. The group started with just six children but couldn’t function effectively with any less, so it was difficult if anyone took time off. Extending to twelve children meant there are enough for each activity and they can often split into two groups. One concentrating on bell handing, whilst the others do theory or handbell work.

Since starting, 30 different children have attended the group. Eight have progressed to ringing tower bells, twelve are still in the group, and ten did not continue after leaving the group. The children range in age from 8 (school year 4) to 10 (school year 6).

They started with children from school year 6, but now realise that it is better to start with years 4 and 5 as this gives the children a longer period (up to 2 years) with the group. One hour per week is insufficient for significant rope time and some of the smaller ones take much longer to master bell control. They are quick to learn the theory of change ringing by using handbells and the mat to learn simple methods – Plain Hunt, Bastow, Treble Bob Hunt and Plain Bob Doubles and Minor.

Having children from school year 4 and 5 means just half the group move on to high school each year, leaving the other half to continue into their second year, whilst helping the new children settle in. Activities are easier when half of them already know what they are doing.

The club meets every Thursday afternoon from 15:30 to 16.30 during term time. The group has excellent links with the school and church and perform changes on handbells or ring tunes for the monthly collective assembly. The group has performed each year at the Skipton Music Festival – this has given them a target for their tune ringing and change ringing on the mat. Those who can now ring tower bells have joined the YACR Western Branch and The Yorkshire Tykes.

The Kildwick Mini-ringers provide an innovative approach to introducing children to all aspects of bell ringing. Whilst it is great when children progress into change ringing on tower bells, it is not the only aim of the group. The main aim is to hold fun sessions which provide the children with lots of different activities relating to bell ringing.

They have covered: tower visits, learning the parts of a bell, using the Ellacombe chimes, ringing tunes on chimes and handbells, ringing changes on the “mat”, quizzes, theory of call changes and methods, how to cast bells, learning to handle on the dummy bell, and eventually handling the tower bells. Chris follows the ART teaching scheme and eight Learning the Ropes Level 1 and Level 2 Learning the Ropes certificates have been awarded so far.

Initially the group met in the church hall but this proved impractical when teaching handling as only one person could use the dummy bell at a time. They moved into the church which means they can use the dummy bell at the same time as doing changes on handbells, tune ringing, or handling the tower bells. There is more space to work in separate groups without disturbing each other.

None of the children are from ringing families so educating the parents about ringing has also been necessary, fortunately they are all keen and supportive. Chris and Jill keep parents updated with regular emails, a Facebook page and Website for the club. All the leaders are DBS checked for this activity, permission forms are completed and a register taken at each session. There is a charge of £10 per term per child to cover costs of refreshments, music, photocopying and other equipment required.

The club perform tunes and changes on handbells at the monthly school assembly and the Christmas Carol Service. They have also entered the Skipton Music Festival each year, which gives them a target to focus on and confidence to perform in public. Audiences are usually very impressed by their unique way of performing changes on handbells.

The first couple of groups moved on to high school before fully mastering tower bells but the children who stay two years are now becoming proficient before they leave. In July 2019, six of the group rang rounds and call changes for their leavers service. These six have continued as members of the Kildwick main band and in January and February 2020 two of them rang their first quarter peals.

Others are waiting to ring quarter peals, but the Covid-19 restrictions mean all ringing is suspended for the time being. Unfortunately, there was no leavers service in July 2020 due to the pandemic.

The Mini-ringers are ready and waiting to recommence activities as soon as Covid-19 restrictions are lifted. The older ones are able to join the main Kildwick band and will hopefully progress to more quarter peals and progressing through the Learning the Ropes levels soon.

The system of recruiting each September from the school will continue and is now well established with a waiting list of children wishing to join.

The 2020/2021 year group are now mostly in year 6 and the suspension of ringing means they have not managed as much time on tower bells as usual.

Chris quickly established a weekly Ringing Room session for the Kildwick tower, the young ringers are particularly keen on this and some are now ringing methods on Ringing Room they have not tried in the tower. Some of the youngest Mini-ringers are ringing methods on Ringing Room without having learnt to handle a tower bell. These sessions will continue and can hopefully be used in future alongside the tower bell lessons. This is a very useful teaching tool and a piece of software the young people adapt to really quickly.

Those who have progressed to tower bell ringing have already attended some YACR Western Branch events and are also ringing with the Yorkshire Tykes youth group.

I believe that the Kildwick after-school club model could be replicated elsewhere across the country where towers and schools sit close together. It does require dedicated leaders who are available during the day time. It is not necessary for them all to be tower bell ringers or that they all come from the local tower for this to work successfully. Children attending straight after normal school results in an ongoing captive audience. The club runs on Thursdays which is the same day as the main Kildwick tower bell practice, which means those progressing to high school can continue to join the evening practice, which now starts an hour earlier to accommodate them all.

The significant and continuous progress made by the Kildwick Mini-ringers over the past four years has prompted this nomination. They have established themselves as an ongoing presence in the Kildwick community and have grown from very small beginnings into a thriving, sustainable concern. Several club members have graduated to full members of the local band and are regular Sunday service ringers.

I would also like to recognise the vast amount of work which has been undertaken by the leaders Chris Wright, Jill Wright, and David Pearson, in keeping the group fresh with new ideas and activities. It is a fantastic example of making the most of the limited resources available to them. Running a group like this demands total dedication week in week out, month in month out, year in year out to be successful.

The establishment of the Kildwick Mini-ringers has been accomplished alongside recruiting and establishing the main band at Kildwick. Chris and David have spent countless hours teaching bell handling and organising the weekly club meetings. Both groups continue to go from strength to strength having started from scratch. 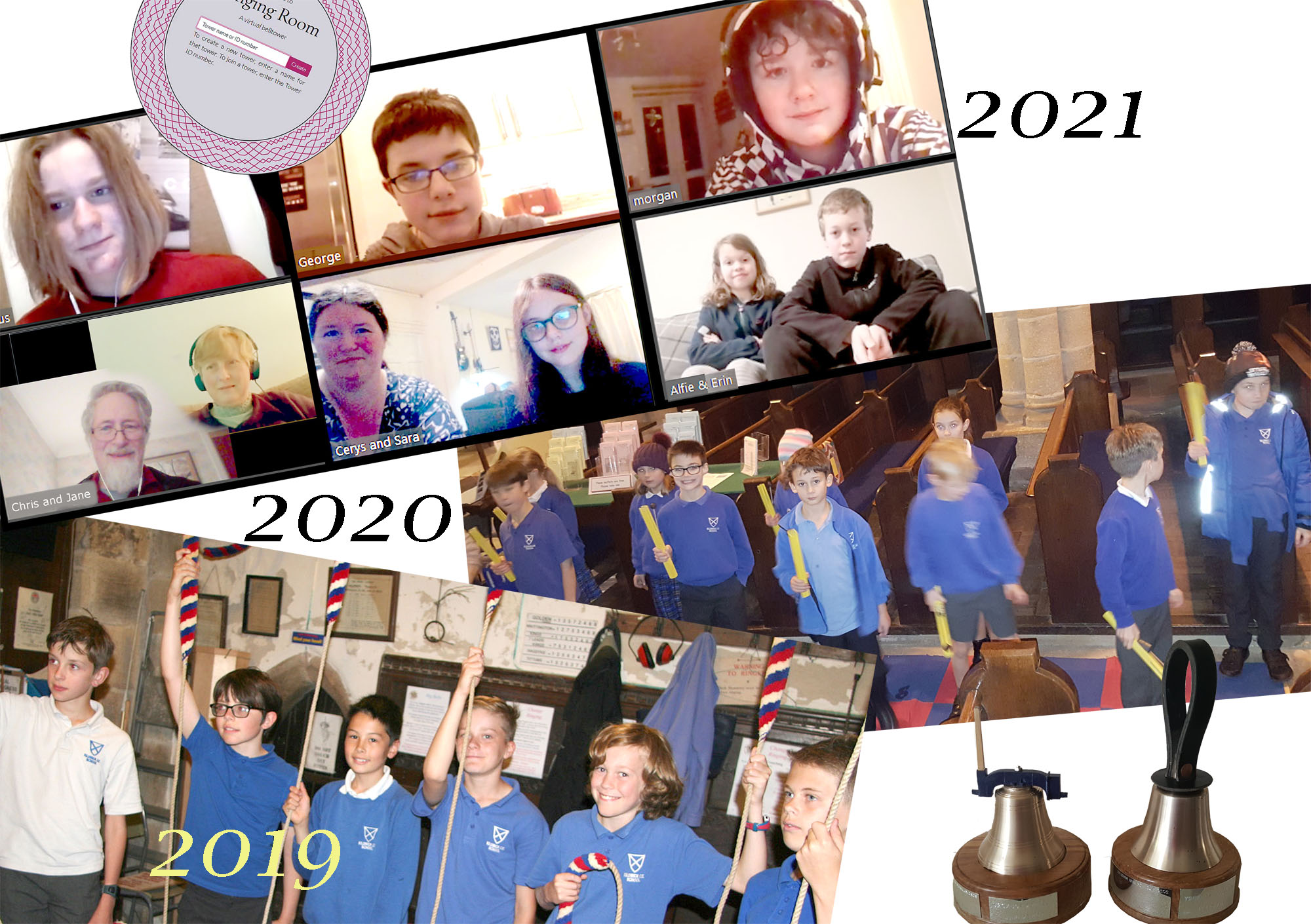