The ART Award for Innovation in Recruitment or Retention - Arnold, St Mary's, Nottingham

St Mary’s is an active parish in the NE suburbs of Nottingham with a ring of 8 bells, tenor 8.5 cwt.

There had been no local Arnold band for some years, and no regular ringing.Towards the end of 2013 the Curate at Arnold, who had previously been at another church in Nottingham, made contact with the Tower Captain at her former church, asking for help to get the Arnold bells ringing again.

Dialogue was quickly established between Nottingham District officers and Arnold’s Choir Master. This request was made at about the same time as the first local ART course was being planned by the Nottingham District, so we now had prospective teachers needing new recruits to teach!

Arnold Church said it would provide the recruits, and so in March 2014, 8 prospective ringers from the choir climbed the spiral stairs to the ringing chamber for the fist time - Choir practice is also on Thursdays (and the only evening we were able to teach them.) The objective was to get the bells rung again by a local band, and this has been achieved.

To enable the band to progress further, and also supporting ringers at a nearby tower, monthly Bob Doubles joint practices began this Autumn which are well attended and received (with extra experienced ringers from the District).

We used the LtR Scheme and ART materials, but not much ‘modern’ technology. We used the LtR Progress books as a record of progress for pupils (and their teachers). We also had a main record sheet for teachers, recording pupils’ progress, who had done what, more practice needed etc. Use has been made of mobile phones (with consent, using the pupil’s own phone) to improve handling.

The initial new band was 8 (3 secondary age children (2 were sisters) the rest were adults with a wide age range, including the father of the 2 sisters). Four newer recruits have since been trained, (3 or them are also secondary school girls (friends of the initial 2 sisters) who learned Bell Ringing for their Bronze DoE Award and are all continuing to ring a year later). The most recent recruit (adult) joined from the congregation and started in June 2016. He was taught by one of the first cohort of Arnold ringers who attended an ART course in April 2016. He is making excellent progress and is keen to use (and help install) more technology.

The success of this initiative which involved several different parties working together, including Arnold Church and Choir Master, Nottingham District and ART, as well as the commitment of the new Arnold Ringers. The ongoing success of the new band, their commitment, enjoyment of ringing and wish to progress.

The Church provided all the initial recruits. The Church has continued to support these ringers, many of whom are also choristers who already all had a commitment to Arnold Church. This commitment is probably an additional contributory factor in their retention. Also ongoing good communication between Arnold Church, its new ringers, and the ART teachers from Nottingham District.

I would rate the initial recruitment by Arnold Church from its Choir as the major success of the whole venture. We have since had four more recruits, all of whom have made good progress and are continuing to ring. Three of the newer recruits who learned to ring for their Bronze DoE skill were recruited ‘by word of mouth’ by the secondary school sisters.

The most recent recruit (an adult from the congregation) approached the ringers directly. Retention has been good with only 2 lapsing in the first few months.

The initial band all knew each other, all having been in the Choir, they welcomed their teachers and have since welcomed and involved later recruits. Teachers all worked closely as a team, teaching using ideas from ART Module 1. Teachers not always teaching the same student had all round beneficial results because of slightly different approaches and styles of teaching. Initially there were about 6 ART teachers / trainee teachers from other towers in Nottingham District, though not everyone attended every week. The teachers had all attended an ART course, however, two teachers later moved away. After several months and the band could all safely handle a bell with a good style, we aimed to have 3 teachers and sometimes other experienced ringers also attending. Teacher attendance has now reduced further with the aim of at least 1 teacher most weeks but other experienced ringers sometimes attend as there‘s now a need for competent inside ringers, especially for the new monthly Bob Doubles sessions, (held jointly with a nearby tower). We hope that this will also lead to the 2 towers working together more in the future. The new band’s first Service ringing on their own was for Remembrance Sunday 2014.

From the start, the band have been encouraged on to see themselves as part of the wider ringing community, District, Guild and (inter)nationally. Many have now attending events outside their home tower District meetings, midweek daytime meetings, fun striking competitions, a Young Ringers tour of Nottingham towers by tram (with Young ringers from Notts & Derbys), 12 bell ringing aimed at less experienced ringers at Southwell Minster, Guild training workshops for Plain Hunt and Plain Bob Doubles.

Ringers have all benefited from participating in these events, including getting to know other ringers and experience ringing at other towers. They do not feel they are an isolated group of ringers and I’m sure this will have helped with their retention and progress. Many in the band also have their individual commitments to Arnold church. In January 2017 the band will host the District AGM. Only 2 of the early learners lapsed in their first year and in Sep 2016 one older girl went to University.

The short term goal was to have the bells rung for Sunday Service by a local band, they now also manage and ring for the many weddings at Arnold. Arnold now has a home grown ART module 1 teacher (not considered as an initial goal) More recruits will be needed as the school girls may leave for University in the next couple of years. Longer terms ideas discussed are to install some up to date technology (eg modern simulator), including initially exploring what other technology options are in use at other teaching towers, the latest recruit is keen to be involved with this.
Continuing to support the band but accepting that there won’t always be a teacher in attendance weekly. To enable the ringers to run their own practices.

It is now just over 3 years since the Curate’s initial request for help and 2 ¾ yrs since the band had their first lessons. For the first few months, we divided the new ringers into 2 groups, each person receiving 1:1 bell handling tuition for an hour a week (all we could manage), this continued for several months. Progress was generally good so once they could all handle a bell safely, we brought them all together for a 1 ½ hour session, with extra handling practice before the main practice (and ongoing comings and goings between choir practice and the tower, which still continues and we all work with!).

With new recruits, we aim to give them up to an hour 1:1 handling tuition before the main practice. Ideally we would like to give recruits more teaching time each week, but this is not feasible.

We have used the Learning The Ropes Personal Progress logbooks to assess and record progress.

To consider ways of enabling all ringers to progress now the band’s abilities span a wider range, this has included encouraging them to attend events outside their home tower. Teaching the band how to manage a practice night was not considered in the early plans.

The ongoing support of Arnold Church, ART teachers from other towers in Nottingham District and the emerging enthusiasm of the ringers. The teachers have always been made welcome by the Church and Choir and good communication continues between all parties.

After ringing and waiting at the bus stop, people often comment on the ringing and I then can have a PR chat with them! Arnold ringing chamber is a gallery with clear glass windows over the nave so the congregation (including wedding guests) are able to see the ringers. The local community now regularly hear the bells rung for services including weddings.

Following from this initiative, the Guild Education sub committee ran an 8 week Saturday morning ‘Ringing School’ in May and June 2016 in a rural area of the Diocese where we identified a need for new ringers and towers who could then take them forward after their 8 weeks in ‘Ringing School’. Our recruitment drive and taster morning were not very successful, in the end, 5 ringers were trained but only 2 or 3 now remain. From the Arnold experience, I see how the involvement of the Church in recruitment and support had such a positive effect, compared to the 8 week ringing school where local Churches had not been actively involved.

All new ringers have been registered on SmART Ringer and so have access to online materials. All have been made aware of the facebook support group for new ringers Some ART DVD’s and other videos (eg CC learn2ring series) have been used and promoted as teaching aids. Abel on an individual’s laptop has been used for striking and rhythm / listening practice (J key) and we now hope to explore and install new technology with the technical expertise and enthusiasm of the latest recruit, which will further enable the band to improve and progress.

The ongoing support of Arnold Church, group teaching sessions and good record keeping. In terms of ringing, we spent a lot of time working with the new ringers on acquiring a good handling style and sound Foundation skills. Handbells have also been used as a teaching aid, also playing cards to teach and understand call changes, and place in a row etc.

To have thought about longer term support and training, with a ‘reducing intensive support’ strategy.

As a result of this: 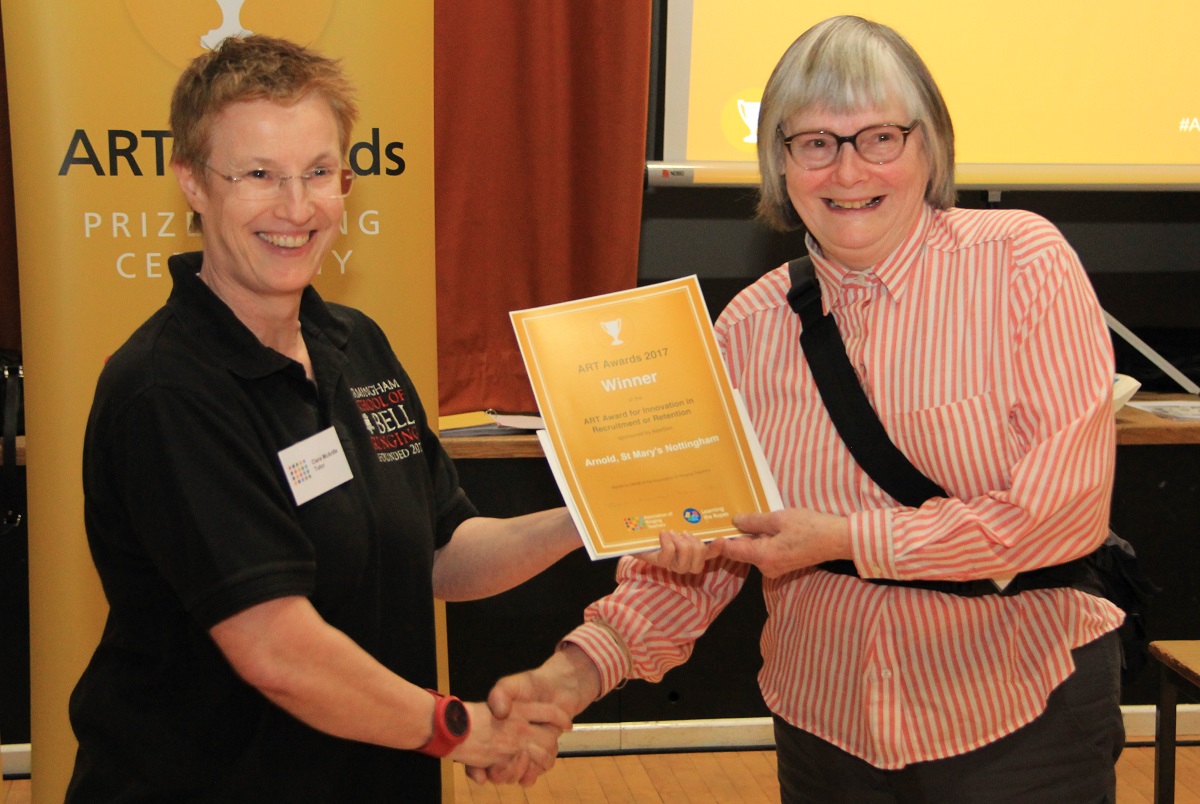