Lisa Clarke is the Tower Captain at St Nicholas' Church, Combe Raleigh - a three bell tower in a small parish of just 180 residents near Honiton in East Devon.

The band at Combe Raleigh was formed in late 2008. Initially, we were four complete novices who wanted to learn to ring bells. Our village had no ringers and the bells hadn't been rung by a village band for some 50 years. Derek Ballard of Honiton kindly and bravely taught us. We were advised that if we wanted to ring our three bells long term, a full restoration programme would be required. The project has expanded considerably and in 2017, we look forward to seeing the completion of the restoration of the existing three bells, augmentation to six and the installation of a new ringing chamber. In the last eight years our band has grown from four to twelve; six villagers and six honorary villagers.

We installed a simulator about two and a half years ago, comprising a home made sensor fitted to our treble bell (3 3/4 cwt) and an old computer running Beltower, a versatile and user friendly program written by Derek Ballard. Although there's a lot you can do with a tied bell where the sound is generated through speakers in the early stages of teaching someone, it was the addition of a large screen that made all the difference and revolutionised our approach to teaching and ringing generally. Two of our band members used it from the beginning and now seven of our members use it regularly. Word spread of the positive benefits and these days we have many outside bookings from friends at other towers.

I attended the ART Module 1 course in November 2015 with the notion that I could use our simulator's full potential to teach learners. During 2016, I have taught three people from scratch, one mature lady and two teenagers. All three are on the Learning the Ropes scheme and the combination of the ART training materials and the simulator with a large screen have been a winning formula. With Beltower, I can tailor each and every lesson to the individual's needs. The software is very versatile and I can key in relevant touches, new methods, specific exercises or change any of the settings as required.

The usefulness of the simulator with the 20" screen became evident very quickly. I have the screen positioned quite close to the ringer so that they can make full use of ropesight (either with cartoons or 'real ringers'). This helps those who are trying to gain ropesight as well as those who already have it and can utilise it to ring complicated methods. The objectives for its use were not only for raw beginners but also for any ringer at any stage whether to improve striking, learn a new method, practise for something specific or simply gain more rope time without having to arrange a tower and a band. We now have a sensor fitted to our second bell (5cwt), so that there is a choice between two weights of bell. As part of our tower project, we will have sensors fitted to all six bells so that ringers can choose which bell they would like to practise on as an individual, or we can practise on all six with tied clappers and intend offering training sessions without any noise impact on the neighbouring properties.
The marked progress of everyone who has used our simulator and screen during the year is the inspiration for this nomination.

I would like to be considered for this award because I feel that using a simulator with a large screen is so beneficial that this approach should not only be written into training programmes, but also form part of a ringer's ongoing development. Our set-up is neither exceptional nor expensive and I firmly believe that using the simulator as we do can dramatically improve the quality of ringing. For new learners, once they can handle the bell I encourage them to count all the bells they hear all the time. When they start to ring rounds with the simulator, they co-ordinate the position of their hands at each stroke with the counting of the bells and this makes for good striking (there are some adjustments to make for each individual, but it's a good start!). An important underlying benefit of ringing with the simulator from the beginning is that they have the opportunity and luxury of hearing and having to fit in with perfect rounds. (Sometimes during a practice I will turn off the screen (without warning) to ensure that they are still listening). Their ears are trained to listen to all the bells and a good rhythm can be developed from the outset. As this technique is based on listening, this skill transfers to the tower readily and they are able to ring rounds well straight-away. I have seen this happen with all three of my learners to the astonishment of the regular band. Used in conjunction with ART's Learning the Ropes scheme, they progress rapidly and develop the ability to listen closely all the time. new ringers often say that they don't get enough time on the end of a rope when they desperately need it, but the simulator can offer a lot more time than the average practice can normally afford, as well as focused practice for the individual. It is a highly effective use of technology for teaching. Not only does it give them confidence to ring with a real band for the first time, but it accelerates the learning process compared with the traditional approach. For more experienced ringers, there's an opportunity to practise anything they wish. Their normal ringing may flag up consistent striking errors - the simulator doesn't criticise or make judgements but the striking results are plain to see. It gives all ringers the chance to correct faults with the simulator and any adjustments that are required will transfer to real ringing. In my opinion, ringing performance with the simulator is an accurate reflection of ringing performance with a real band.

I am proud of the results achieved this year.

Sally is a mature lady who began to learn to ring in early January. Initially her lessons were intensive but we have continued with simulator lessons on a regular basis as she undoubtedly benefits from them. She is plain hunting well and now trebling to doubles methods as well as learning to raise and lower in peal. She is currently working towards Level 3. I have tailored each lesson to her needs as she has progressed. For example, her introduction to plain hunt was on three bells with three covers, or when she wanted covering practice, she would ring our second bell and I would alter the pitch so that it sounded heavier and more realistic which helped her to keep in time.

Joel (aged 14) began at the end of March. He has learnt to plain hunt quickly. Rather than look at the ropes on the screen, he would watch each row as the changes developed on the right hand side of the screen which, although unconventional, enabled him to master the speed changes of plain hunt from the start. He succeeded in plain hunting very well when he tried it for the first time with a real band. He rang a quarter peal on the tenor with the simulator before ringing it for real. He is also currently working towards level 3.

Ashleigh (aged 15) began at the end of August. She learned how to handle a bell, ring called changes and raise and lower before she rang for real with others. When she did, the other ringers were astounded by her competent handling and striking. She rang for Sunday services the following week and she has since called some changes as well. She is working towards level 2.

For the majority of those who come to use the simulator and my three learners, I seem to be a personal trainer for bell ringing.

I am delighted with my learners' LtR progress. The quarter peals that have been scored following dedicated preparation with the simulator are all listed on BellBoard. My own record of progress to Surprise Major ringing is evidence of the usefulness of the simulator. I could never have rung Surprise Major quarter peals so quickly without it. Practising in this way is obviously different from practising with a real band as, although the simulated band strikes perfectly, nobody puts you right if something goes wrong. I have found that if you can ring it with the simulator, you can ring it for real. Quarter peals rung with simulators can be posted on 'Bell Board for Simulators' on Facebook, a public group with 65 members to date. They may not count as real quarter peals but they are invaluable as quality practice and give recognition for something achieved.

Derek Ballard has recently written additional Beltower software on Raising and Lowering that will be available in early 2017. I anticipate that this will be an extremely useful tool as learning to raise and lower in peal is one of the most difficult aspects to learn.

Finally, during 2016, we have made sensors for another three towers in the area; they all have learners and use Beltower with a large screen. This is further evidence of the success of using simulators in this way as part of a teaching programme. 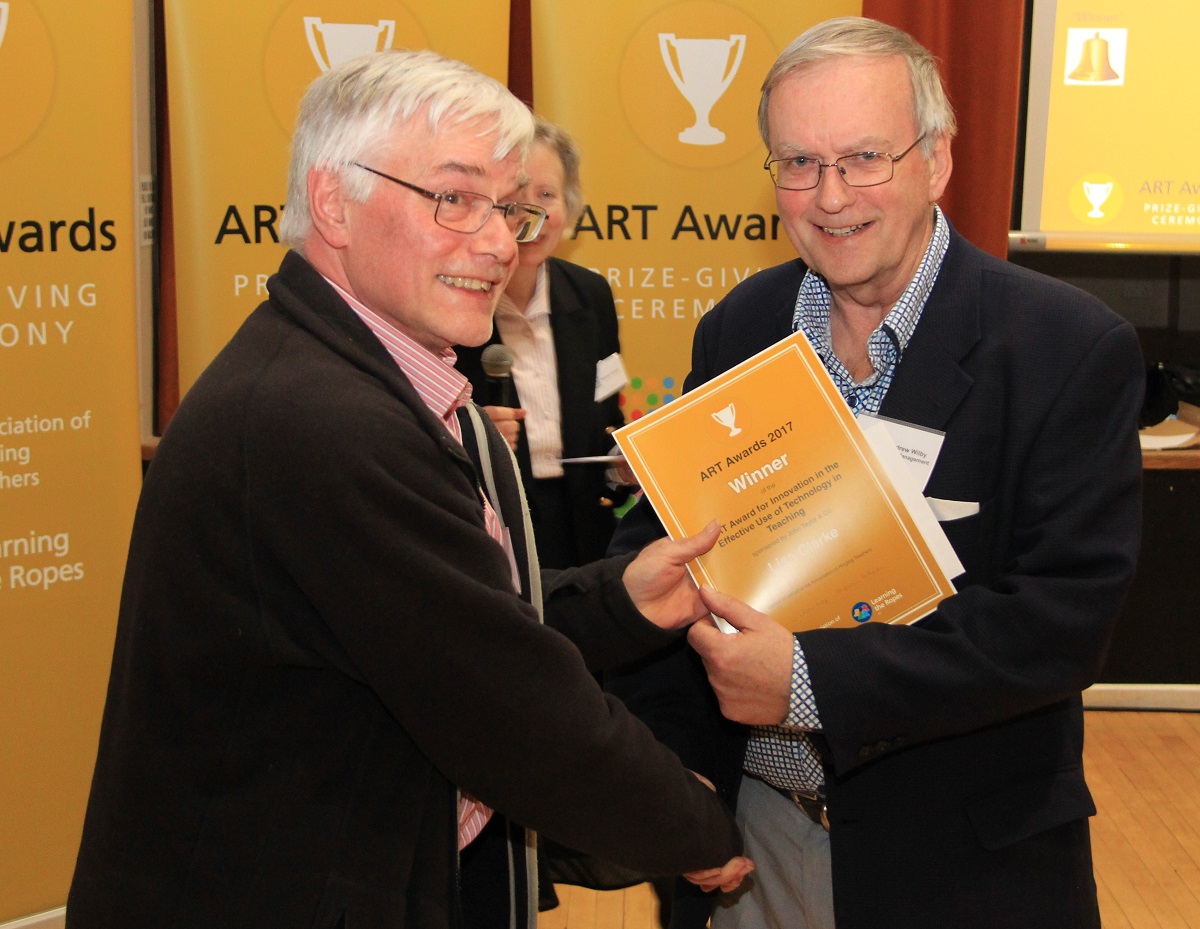