Colerne C of E Primary School After School Bell Club aims to teach tower bell handling skills to the older children in the school (Year 4, 5 and 6), in Colerne Wiltshire.

The school already takes part in many village activities. I (Roger Haynes) approached the Head Teacher after a church service to ask if the school would be interested in getting a group of children together to learn how to ring the tower bells, as an afterschool club. Within three months the first after school bell club was formed with 8 children from Years 4, 5 and 6. There were two key objectives we wanted to achieve with this group, teach the children to ring a tower bell and get them to ring for their school services held in church. Since it has been going the group had formed links with several local organisations. They have been out to visit local churches to ring. The children visited Bath Abbey to ring in the much bigger tower on the simulator; they rang for the Queen’s birthday at St Giles church Alderton which is tiny and received a very nice letter back from Balmoral thanking them for ringing for the Queen’s birthday. Some of the children have also joined the young person practices in the Gloucester & Bristol and Bath & Wells Guilds. During this time, we have been approached by other adult ringers to find out how to get their own youngsters groups up and running.

The group’s primary support is from other ringers and key staff at school. Without these, the group would not be able to take place. We use a simulator for the majority of the time to teach the children on the practical side. When the theory is required we use ART resources as well as our own. The white board in the tower is used a lot as well.

The core of the group is focussed around three experienced local ringers who give their time every Tuesday from 3.30 – 4.45pm to teach the children how to ring. The school Business Manager is a lapsed ringer who got involved when the school was approached to set up the club, she is now a key member of our team who promotes the club with the children and keeps the reserve list of the children waiting to join, she also rings with the children.

The group has been in existence since September 2014, its goal was to pass on the skills of church bell ringing to the younger people in the village.

The nomination for this award was prompted by Graham Nabb who suggested it after seeing the picture of five of our children ringing for their Christmas service this year posted in the Ringing Teachers Facebook group. 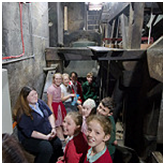 Since the start of the bell club we have had no shortage of children wanting to join the club from school. In fact we now have a waiting list for children to join. We take new children when we suffer “natural wastage” or the children progress on to join the team of church bell ringers to ring in the method practice.The children seem to be the best advert for this activity, they speak about it to their friends in school, this is the best form of advertisement. The children have progressed on to ringing with the main band and with that ringing for services, weddings, and supporting other local churches when asked.

The progress of each child has been measured by using the progress cards designed and developed by Pam Copson. These were just what was needed to keep the interest and enthusiastic allowing them to colour in the card and visually see their progress on a week by week basis, and the award of badges for them to wear in school has been a great hit. The teachers have been managing the lessons by using the ART teacher forms, which have been modified and changed to suit the “group” teaching method, rather than the more traditional one on one approach. Over time we have found that not all children will i) learn at the same speed, ii) pick things up in the same order, iii) be equally confident in what you are teaching them. So we now informally customise the teaching to suit each child but still end up teaching the whole to them.

Due to the age of the children we are teaching we have challenges over the height of the children, and with some their stature is very slight. This is overcome with a very good set of sturdy boxes which we can stack if we need more than one box! Some of our bells are not all suitable for the youngsters due to the weight of them, so we visit other local towers to practise on lighter bells. 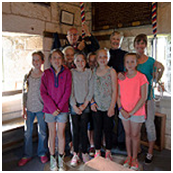 The group has been a resounding success as the children have rung for the school Harvest, Easter and Christmas Services since the club began. They also rang for a very special service attended by The Bishop of Bristol who came up to the tower to congratulate the children on their ringing. We are continually assessing the success of the after school group while the line between the school club group and the local band of ringers is now becoming somewhat blurred as the youngsters are now involved in both groups. One of the children recently rang for her parents' wedding while dressed in her bridesmaid dress. The children are a joy to teach – they are willing and capable, the parents are also very interested in what their children are achieving and regularly come up to the tower to watch.

The ringers have also been instrumental in starting the school chime bar group up after taking the church hand bells into school for the children to ring. The school went on to purchase as set of chime bars. This has also been running for several years.

The parents have all been involved in the activity, seeing what it is that the children are doing. They are actively encouraged to keep finding out what they are doing. Some have even tried the back stroke. The Head Teacher has been along to have a go and embarrassed himself in front of the children! (Slightly heavy handed!) During the time the group has been in existence we have involved the Priest in Charge, the Bishop, the School Governors have discussed it at their meetings, and the church community have been made aware or their activity. The school Business Manager is now a regular member of the group as a lapsed ringer returned! We keep the local village informed of our progress by including articles in the school newsletter, the Parish Magazine, and the school web site has many action pictures. I now get stopped in the street in the village and the locals ask me about the progress of the group. We do not use social media widely due to the age of the children and school policy. However, we are able to release key milestone achievements in a controlled way, as we did on the Ringing Teachers Facebook group recently.

The key lesson we have learned while running this group is that one size does not fit all children when it comes to learning! They concentrate better for shorter periods of time and lots of shorter teaching activities seem to work better. The group/team learning is a big win as they “bounce off” each other when being taught new elements. The children are competitive amongst themselves; currently they like to see who can ring a bell up or down the quickest!

Since 2014 we have had approximately 49 children through the after school club and taught them to handle a bell. Currently we have a group of five children who regularly join the local band on the practice night.

We are some what overwhelmed by the waiting list of children at school wanting to learn.

In 2017 for the Christmas school service we had a complete band of children ringing unaided on the front five. The youngest being 9 and the oldest being 12.