The Carlisle diocese was created in 1133 by King Henry I and the church of the Augustinian Priory in Carlisle became the Cathedral. The building is the second smallest cathedral in the Church of England and sits close to the border between England and Scotland. It has suffered greatly in the centuries of feuding between the peoples of the 'Debateable Land' and at the hands of Parliamentary troops in the English Civil War but the building is a warm, intimate and welcoming place. Bells have rung out from the cathedral for 850 years. There are records (the Lanercost Chronicle) of the bells being rung in 1306 to herald the arrival of King Edward I on his foray into Scotland and in 1307 of Cardinal Petrus Hispanus excommunicating Robert the Bruce for the murder of John Comyn, Lord of Badenoch, before the altar of Greyfriars Church '… with candels light and causing the bels to be roong they accursed in terrible wise Robert Bruce'. In 1400 Bishop Strickland orders that the new tower of the Cathedral be provided with 'quatuor magnis campanis' or four great bells, and one of those bells, Maria, still hangs in the tower where she rang for 600 years before an honorary retirement in 1999.

In contrast to many counties in England, Cumbria has few rings of bells hung for full circle ringing. There are no other rings of bells in the city (the bells of St Elisabeth's church, Harraby cannot be rung at the present time). The nearest other towers are twenty and thirty minutes' drive away and so there are few local 'feeder' towers and fewer regular visiting ringers. Recruitment of ringers has always been an ongoing challenge, for the Cathedral as much as for other towers.

However, in 1999, a ring of ten new bells was installed at Carlisle Cathedral as a partnership Millennium Project, replacing a ring of eight bells once renowned as 'the worst set of Cathedral bells in England'. The ring was augmented to twelve shortly after the millennium and a sharp second bell was added in 2005. The new bells were easy to handle and sounded delightful. They offered a wonderful opportunity to develop teaching at the Cathedral and recruit ringers. Under the guidance of the new tower captain, the bell ringers were constituted into a Society with a constitution and AGM and formally accountable to the Dean and Chapter through the Canon Warden, our honorary president. A programme of recruitment and teaching was launched that incorporated three main elements:


The first step was the construction of twelve clapper ties that could be fitted quickly to the bells. Each tie rests on the clapper ball and is secured by an aluminium gate locked in place with a captive thumb screw - that cannot be dropped on the belfry floor!.

Sensors were fitted to each of the twelve bells and Abel software installed. Twin speakers in the ringing room completed the installation. 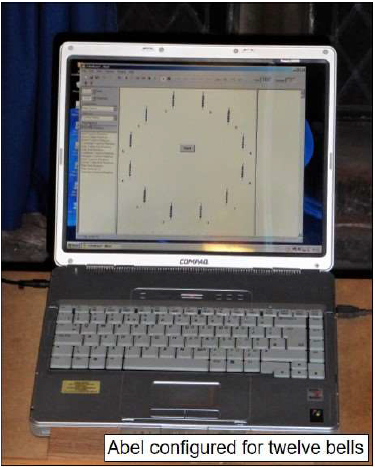 The simulator was then used regularly for teaching at the Cathedral - recently, as often as three times each week. Learners are taught with the sound 'on' from the beginning to help them to experience the 'sound moment' when physical action and sound come together. On occasions, eight bells may be tied and six bells then rung with the sound 'on' while individual teaching of bell handling is taking place on the other two bells with the sound 'off'. The ringing circle is perfect for ringing all twelve bells but when ringing on six bells is less so. However, having sensors on all twelve bells allows a better ringing circle to be chosen by leaving out some bells and selecting others. The latest software update for Abel now allows the tied bells to be used for the teaching of raising and lowering and is most useful. The simulator is also used by visiting ringers and by Guild members on regular occasions for intermediate level teaching, surprise practices and also for the ringing of quarter peals. As a result the bells are now used very much more frequently than would be allowed on open bells.

The launch of ART gave an opportunity for the first time to introduce a structured teaching program for ringing and to recognise and reward progress. Five members of the band became accredited teachers or mentors within the ART scheme and so technology and human resource came together to actively promote ringing at the Cathedral.

On Sunday mornings an A-Board is displayed on the Cathedral green to interest passers-by in learning how to ring . The A-board, although simple technology, has attracted the attention of the media and there have been visits from the local radio station and from TV crews within the last twelve months, most recently for the Heritage Open Day when the tower and bells were opened to the public. They recorded 'general interest' broadcasts about the tower members and ringing and helped to raise awareness of ringing as an activity.

Three video cameras were installed in the tower in 2016 - two in the belfry and one in the ringing room. On a Sunday morning, live video images from the cameras are relayed via a transmitter to a monitor in the crossing of the cathedral. Members of the congregation and also visitors can view both the bells and the bell ringers, ringing for the service. 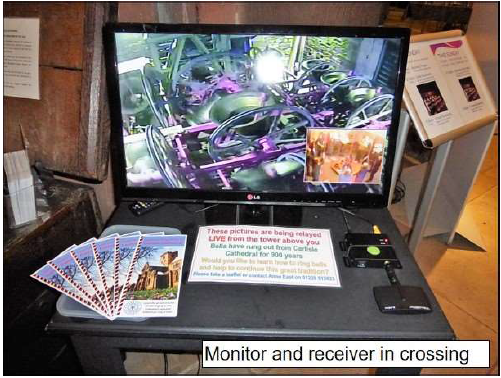 Recruitment leaflets with contact details for the tower secretary are left next to the monitor and copies are often taken. The clergy report that the video transmissions are of great interest, particularly at special services when those attending are not necessarily regular members of the cathedral congregation. A father and his son aged eight years are considering learning to ring because the boy loves visiting the cathedral every week to watch these video pictures!

There is also a slideshow (photograph) of ringing available to run on the monitor should the transmitter fail or we are practising on tied bells, perhaps after ringing for a service.

Since 2013 the Cathedral ringers have hosted three or four Open Days each year in the tower. The Open Days are advertised locally in advance and also on the day using A-boards. They are very popular, so much so that at the end of each open day there is a list of people who were unable to go on a tour and want to be contacted when the next open day is taking place.

The ringers are now quite familiar with the routine of these days and the health and safety implications of guiding groups into the tower but we are always adapting what we do as a result of feedback from visitors. There are seven tours each open day and at the start of each tour there are displays, recruitment leaflets available and the monitor showing a slide show of the ascent to the tower with 137 steps to climb and the crossing of the clerestory. Usefully, some visitors with a fear of enclosed or open spaces may opt out of the tour at this stage. The monitor also shows a slide show about the history and practice of bell ringing to the visitors as they wait for the tour to begin. 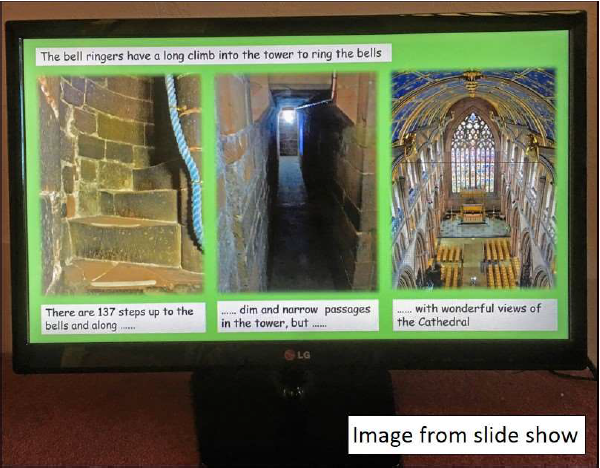 The health and safety of visitors to a medieval building is also very important and two sets of two-way radios are in use. One set is used between the leader of the group ascending or descending the tower and the reception desk and the second set is in use between the ringing room and belfry.

The visitors are divided into two groups on entering the tower. One group, equipped with ear defenders, is taken up to the belfry to learn about the bells and to see a bell ringing. The other group remains in the ringing room to see how a bell is rung and to learn about full circle bell ringing. Bells are rung both tied using the simulator and open so that visitors can understand about how new learners are taught without disturbing the neighbourhood - a factor that may discourage someone from deciding to learn how to ring.

We use the monitor in the ringing room to show how the action of pulling on a rope turns the bell through 360o in the belfry above. Method ringing is also demonstrated using the simulator, often to the amazement of visitors who had never before understood the mental and physical challenge of bell ringing.

The cathedral tower captain, also the Diocesan Bell Advisor, regularly gives talks to interested groups such as the WI, Rotary clubs, local history societies etc. to inform the wider community about ringing. The presentations, that are illustrated with both video and sound, are designed to educate the general public about the nature of bell ringing, its history and technology and to sow seeds of interest that someday may come to fruition.

Our latest project in summer, 2017 is a downsizing of technology - the purchase of an eight bell mini ring from Matthew Higby. The 'Borders Mini Bells' are presently housed in the garage of two of the Cathedral ringers who live in Powfoot - a Dumfriesshire village on the Solway (note that Carlisle is very close to the Scottish border). The bells will be made available not only to bell ringers but also to groups such as the disabled, scouts, guides, dementia sufferers etc. who may not ordinarily consider ringing bells but may find ringing interesting, therapeutic or just good fun. The Mini Bells partners (all of whom are cathedral ringers) who purchased the mini ring are now purchasing a frame for the mini bells so they will be portable and available to any groups in Cumbria and southern Scotland who may wish to demonstrate or promote ringing. In summary, we have made extensive use of: 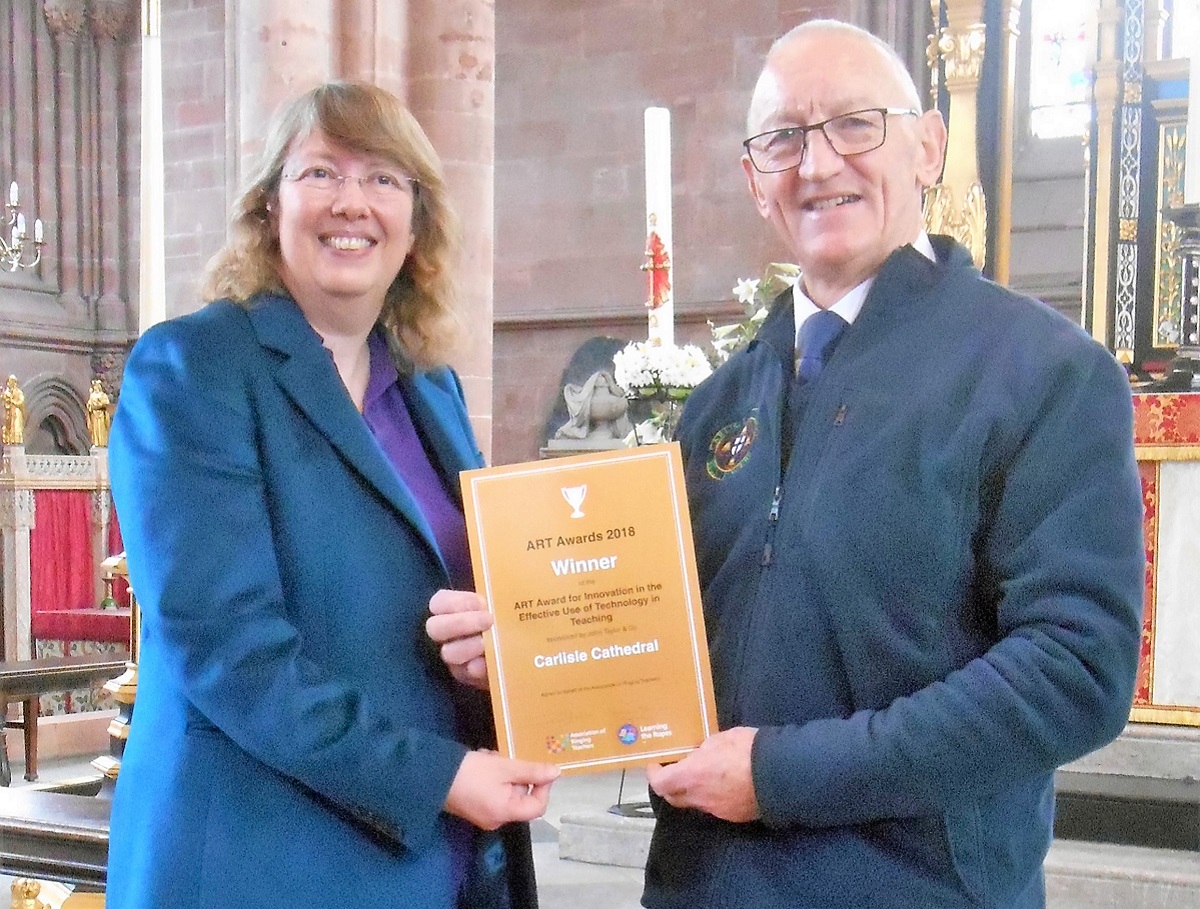