The ART Award for Innovation in Recruitment or Retention - Dunster Branch


The Dunster Branch Education Team, under the leadership of our Education Officer (currently Jan Swan) works across the Dunster Branch, one of 11 branches of the Bath & Wells Diocesan Association of Change Ringers (B&WDACR). It covers the largely rural area of West Somerset stretching from Exmoor in the west to the Quantock Hills in the east. Apart from the towns of Minehead and Wiveliscombe, all our towers are in small villages or hamlets.

Our education team has developed gradually over the last 14 years, under the guidance of successive Branch Education Officers who have established regular branch training programmes, brought in new people to training roles and provided support to bands around the area. We now have eight teachers who are full Members of ART and two associate Members. We also have a pool of experienced ringers who provide valued help on courses.

Our objectives are to:

We link with neighbouring branches for specific activities, such as young ringers’ practices and outings, support for new bands on the further outreaches of our area, and by an annual joint branch practice with NE Devon. Increasingly, neighbouring towers are working together on recruitment, training, service ringing, outings and social events.

The main venue for branch training events is Minehead tower (10 bells) which has had a simulator for over 20 years, has a large ringing room with white board, flip chart stand etc, and has a toilet and kitchen in the church. In 2017, a simulator was installed at Sampford Brett (6 bells), a ground-floor ring, which is being used increasingly for training and targeted practices. In 2018, a further simulator is to be installed at Carhampton (6 bells). All three towers have well-maintained, easy-going bells suitable for teaching beginners. Over the years we have developed a range of hand-outs for courses, and learners are also encouraged to make use of the Branch Book Stall and to access on-line resources.

Our education team comprises the Branch Education Officer, supported by the two previous Education Officers, our 10 ART Members and experienced volunteer helpers. The learners we have been training and supporting over the past two years range in age from 13 to 79 and come from 15 different towers.

Over the last two years, four new bands have been started and they are now able to ring independently for Sunday services. In a fifth tower, weekly practices have resumed after a break of several years after we helped train three new learners and mentored two new teachers. The number of new ringers becoming members of our Association has increased significantly: 17 in 2016, and 14 in 2017. Our achievement was highlighted by the Association Treasurer in his April 2017 report: ‘In these days of dwindling numbers of ringers, it has been gratifying to see a significant increase in Association membership, particularly in the Dunster Branch’.

Over the last two years, the Dunster Branch Education Team has supported the establishment of four new bands (in previously silent towers), helped re-instate weekly practices in a fifth tower, and encouraged 31 new ringers to become members of the B&WDACR. The majority of these new ringers are progressing using the LtR scheme and one has gone on to train as an ART teacher.

The impetus for each of these new bands began with a local person having an idea and making contact with a branch officer to see what could be done. In one case, a new associate priest (a lapsed ringer) wanted the bells to be rung again in his home tower. In another, two villagers heard the bells being rung by a visiting band and decided it would be good to get the bells ringing on a regular basis. In another, a former ringer wanted to try and re-establish a local band. In two cases, the initial request for help was followed up with an open day or evening, supported by branch members, with the contact details collected for those that were interested in taking it further. In the other cases, the instigators talked to other villagers, and then having agreed a training plan with the Branch Education Officer, advertised the date and time of the first training sessions. Many of our towers have had open evenings and other events over the past two years (including as part of Heritage Open Days) to raise the profile of ringing locally. But in a rural community it seems that word of mouth and personal invitations are one of the most effective ways to recruit. The Branch has also set up a Facebook page and a Twitter account to add to our means of communicating with both ringers and non-ringers.

Three of these new bands were taught as groups in concentrated sessions by mostly ART trained teachers. Many of these sessions were held on Saturdays at Minehead where we have a simulator, and were then followed up by both group and one-to-one sessions at the home tower. We also held some extra ad-hoc teaching sessions at Carhampton to provide additional practice. For several months of 2017 we were regularly supporting six extra training sessions a week for learners in our new bands. The fourth new band was taught locally by experienced ringers from a neighbouring tower. All four bands now have established weekly practices and regular Sunday service ringing. In the three ‘ART-led bands’, all ringers are progressing using Learning the Ropes. In addition, our 10 ART Members are teaching new ringers in their own or neighbouring towers, often working as a team of two or three. Our experience has shown that is definitely more effective, efficient and enjoyable to teach new learners as a group. Teachers can support and learn from each other, and learners benefit from the group experience too. In 2018, we will be launching another series of concentrated bell handling sessions on consecutive Saturdays, to cater for the people we know are waiting to learn. We will also place an advertisement and press release in the local newspaper to hopefully attract yet more learners.

Support for new ringers after the initial bell handling stage is another aspect of training that we have been trying to improve. We needed to ensure that new ringers continued to progress and didn’t lose interest, when we weren’t able to continue providing the same level of support as in the initial stages. As well as encouraging new ringers to join other tower practices (with the support of experienced tutors) if and where they can, we have set up weekly practices for ‘improvers’ on a Tuesday morning. These started in May 2017 and have proved very popular. We rotate these practices around different towers in the Branch, in order to give experience of ringing different bells and also to encourage more people to join us. So far, 30 people have attended at least one practice and an average of 7 to 10 attend every week. Although this timing doesn’t suit everyone, it has proved possible for those who work part-time, flexibly or from home (as many people do in our part of Somerset) and of course it is attractive to those who are retired. Younger ringers have joined us during school holidays. Our 2018 branch training programme will include further Saturday improver sessions for those who can’t come during the week.

Our regular branch training programmes have continued in addition to teaching new bands. In 2016, the programme included 21 sessions and in 2017, 12 branch training sessions were held, ranging from ‘understanding, ringing and calling call changes’ through to Grandsire Caters, Surprise Major and conducting. We planned fewer of this type of session in 2017, because of all the extra teaching sessions taking place in the five towers mentioned above. After a year’s gap, our branch young ringers’ practices are re-starting in the 2017 Christmas holidays, now that we have several new young ringers learning in different towers around the branch. 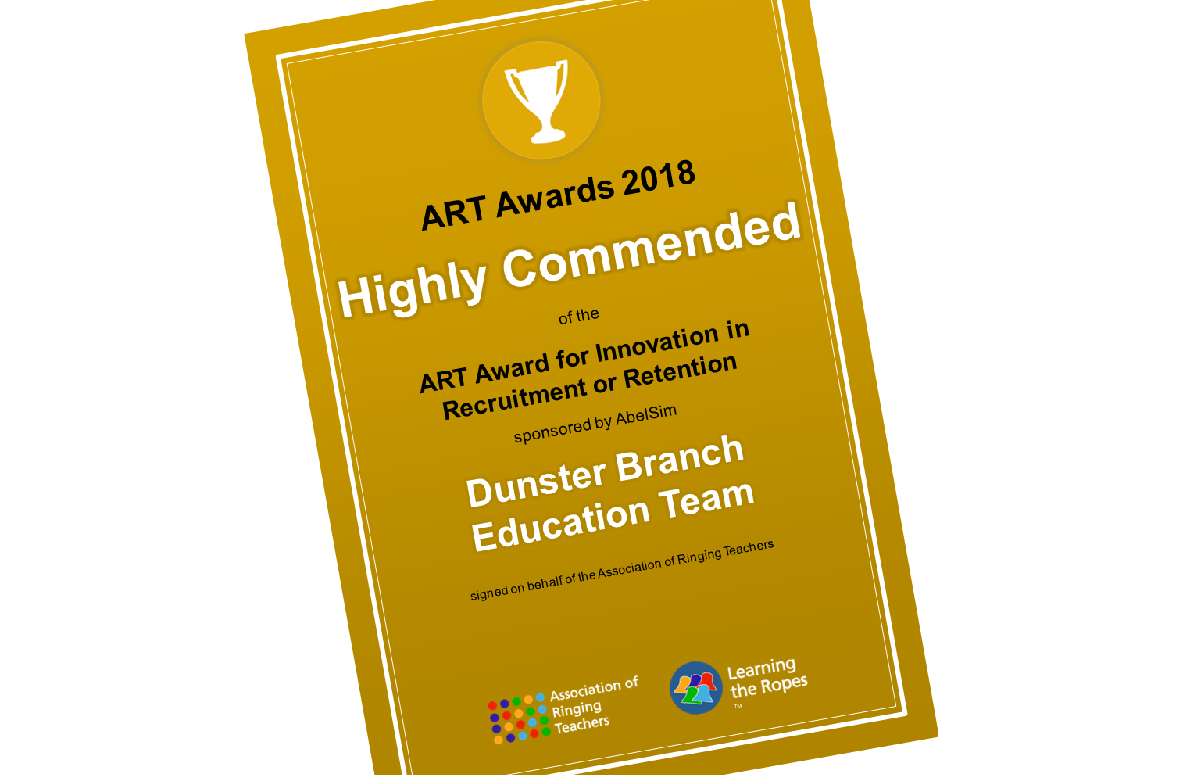