The ART Award for Inspiring Leadership in Ringing - Lucy Chandhial

This nomination shows what can be achieved by an inexperienced ringer, with no leadership or teaching background, through personal initiative and sheer determination.

Lucy Chandhial came back to ringing four years ago and since 2013 has been learning with the band at St. Augustine’s Kilburn. She currently can ring the treble to Surprise and has recently learnt Cambridge Minor.

She has always been keen to contribute and organises the MCALDG’s 200 Club, but does not hold any leadership role in ringing and has not reached the point where she can teach. She is not a Tower Captain and has not run any practices.

A key constraint is that Lucy has for some years worked in Germany for four days each week, travelling to and from the UK on a regular basis. This severely curtails the amount of time she can devote to her ringing. It is Lucy’s lack of experience in ringing or in a leadership role which we feel makes her achievement in setting up and running the London Summer School in 2017 all the more remarkable. What she lacked in experience she made up for in initiative, vision, persuasiveness and her determination to ‘give something back’.

In Autumn 2016 Lucy came across Aviva’s Community Fund, which offers small grants to community groups. She immediately made the connection with ringing and recognised an opportunity to fund the recruitment and training of ringers in the London area. This led to the idea of a one-week intensive Summer School for 20 or more students in the school holidays, providing an all round introduction to ringing, its heritage, technology, science and musicality, as well as intensive tuition in the basics of handling.

From this point, entirely on her own initiative, and despite continually commuting between the UK and Germany, she pursued this vision single-mindedly, achieving along the way the buy-in of first the MCALDG Officers and then the MCALDG ringers. Undeterred by the obstacles, Lucy won over MCALDG’s officers and members and pursued her vision single-mindedly over a period of ten months. 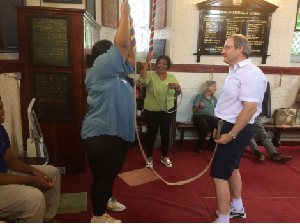 The result was the London Summer School, which ran between 21 and 25 August 2017 at St. Mary Abbots, Kensington, attended by 22 students and supported by 24 MCALDG members. Lucy’s aim was not only to see the learners taught handling, but to use an immersive week-long course to draw them into the world of ringing and the many rewarding aspects of becoming a ringer. Her objective was to bring new ringers and those with relatively little experience together as a group, inspire them and connect them, both to the ringing community and with local towers where they could develop their ringing further.

Over the ten months between September 2016 and August 2017, Lucy single-handedly steered the project from vision to reality. She recognised that what she was proposing was so different to anything recently attempted by MCALDG that she would need to seek help and advice from outside the Association. She also came to the view that balancing the delivery of something this new with her regular commute between London and Germany meant the project did not lend itself to being planned by a committee, and she could be more effective if she worked at her own pace.

A key initial challenge was to dispel initial scepticism on the part of MCALDG’s officers and members, and to win support for the venture. This was something which MCALDG last attempted over 25 years ago, and there was initial scepticism at all levels of the organisation. The idea of a Summer School had not been floated in previous years and no ground had been prepared. To most MCALDG members Lucy’s idea of running a Summer School came as a bolt out of the blue. Despite her lack of positional authority, Lucy managed to convince the MCALDG’s acting President that her concept was worth considering. She then talked persuasively to the MCALDG committee meeting in September 2016 and its Autumn General Meeting in October. A key reason for her success in getting her vision adopted was the calm and assured style in which she spoke at both meetings.

The next step was to overcome the various hurdles represented by Aviva’s grant application process. Lucy wrote the grant application and sent out a series of communications encouraging MCALDG ringers and their friends to vote for it. This in turn enabled the project to win the £1,000 Aviva funding it needed through a competitive bid. 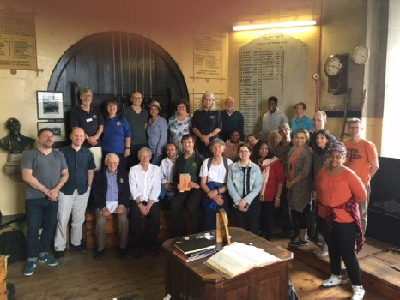 One of Lucy’s successes is that she set up and led the Summer School event while possessing very few of the skills required to make it happen herself. She is not an experienced ringer and has no teaching or event management experience. Her strength was to understand what gaps needed to be filled and how best to bring people with the necessary skills and experience together.

In February 2017, Lucy attended a Module 1 course and ART presentation given by Pip Penney to MCALDG’s North & East District committee. Despite the fact that Learning the Ropes was not widely used in the MCALDG area, she decided that it could make an important contribution to the success of the Summer School and adopted LtR as the teaching methodology for the week. This had the major benefit that helpers and teachers could be moved around flexibly from day to day based on availability, each picking up where their predecessor had finished, as all the students were following the same structured learning path.

Lucy reached out to ART for help in advertising and secured the support of two experienced ART hands at various points during the week.


The next question was location. In Autumn 2016, MCALDG had agreed a small grant to support the installation of a ring of six dumb-bells at St. Mary Abbots, Kensington, and with the support of Stephanie Pattenden, Lucy settled on St. Mary Abbots, given its ability to support six learners simultaneously, each working one-to-one with a handling trainer.

The use of six dumb-bells, with their ability to be rung up and down in a few seconds, dramatically increased the amount of rope-time available to students during the week. Putting together a varied schedule was a challenge, but Lucy managed to achieve this by reaching out to subject matter experts within MCALDG and outside. As a result she was able to put together a rich curriculum which included:

Throughout this exercise, Lucy was very alert to suggestions from more experienced ringers, making numerous changes to the schedule based on the advice she received until it had the right balance.

Lucy’s schedule achieved a format which offered at least 90 minutes intensive handling tuition each day per ringer. In total 24 MCALDG members attended the week at various points, with the number of offers of help exceeding what was needed. The handbell sessions were a notable success with at least one learner able to ring Plain Hunt on handbells before they could handle a tower bell.

Rather than focus on a specific age group, Lucy decided to use the Summer School as an opportunity to bring learners of all ages together. She found students through ringing websites, posters in churches and word of mouth from existing church bell ringers and London’s Time Out website. One challenge was reaching the younger generation, where her conclusion was that more targeted recruitment to young adults through schools, D of E and youth clubs would have helped.

Despite the Aviva grant, the Summer School still needed to make a charge of £50 cost per place; a potential barrier to families wishing to take part. Nevertheless, Lucy did not give up and the group of 22 students assembled included teenagers, those in their thirties and forties and an octogenarian.

During the Summer School week, Lucy took a week’s leave from work to lead the Summer School sessions, setting up a mobile office at the St. Mary Abbots’ Centre. In addition to arranging all the helpers, she led each day’s opening and wrap-up session and still found time to contribute to a number of the handling sessions.

Lucy saw the need to ensure that the students were offered some form of follow-up sessions after the Summer School. She assisted Roger Booth in the transfer of a number of students to regular Saturday morning sessions, which are now being attended by ten of the students. Finally, Lucy wrote the evaluation report on the Summer School for Aviva.

Overall, Lucy pursued the entire project with a calm assurance, hiding a steely determination to achieve her vision. The Summer School would not have taken place, and would not have come close to achieving its objectives, without her leadership and commitment. In doing so she proved that the model of an intensive week-long non-residential course with a rich curriculum could be run successfully.

MCALDG has decided to learn from this example by organising a second week-long Summer School in 2018.


There are two aspects of Lucy’s work which make her achievement exceptional:

To watch a short video clip of the students’ progress, taken on the final day of the week:

Some responses from students who completed the course evaluation form:

Vision: The vision for the Summer School came solely from Lucy, who stayed true to her concept through the months of organisation.

Positivity: Lucy’s positivity and calm assurance enabled her to win minds and support across the MCALDG.

Initiative: Lucy saw the opportunity presented by the Aviva Community Fund, and secured all the funding, support and resources to make the Summer School happen on her own initiative.

Determination: Through sheer determination, Lucy overcame her lack of experience and the demands of her working schedule to deliver a project which fell substantially outside her comfort zone.

Listenin : Although she provided the vision and almost all of the organising energy, Lucy actively sought to bring in the skills and experience of others and was always ready to make changes in response to advice or suggestions.

Communication: Lucy’s personal charm and ability to communicate at all levels of the MCALDG enabled her to bring in and manage 24 MCALDG helpers to support the Summer School week.

Calmness under fire: Despite the pressure of organising the Summer School week single-handed, managing 24 helpers and responding to the needs of 22 students over five days, Lucy never showed any signs of panic or personal strain. She tackled everything and everyone with the same blend of calmness and assurance which had enabled her to convince MCALDG to go ahead with the Summer School in the first place.

Persuasion: In the absence of any positional authority, and with a limited ringing background, Lucy deployed exceptional powers of persuasion to convince MCALDG by herself that hers was a vision worth pursuing and that she could deliver it.

Inclusiveness: Lucy did not manage by hierarchies. She was always available and open to ideas and suggestions throughout the project. Where necessary, she deployed ‘persuasion power’ rather than ‘position power’ to get things done.

For Ringing in London:

For the helpers and teachers:

Gaps – do differently if running again 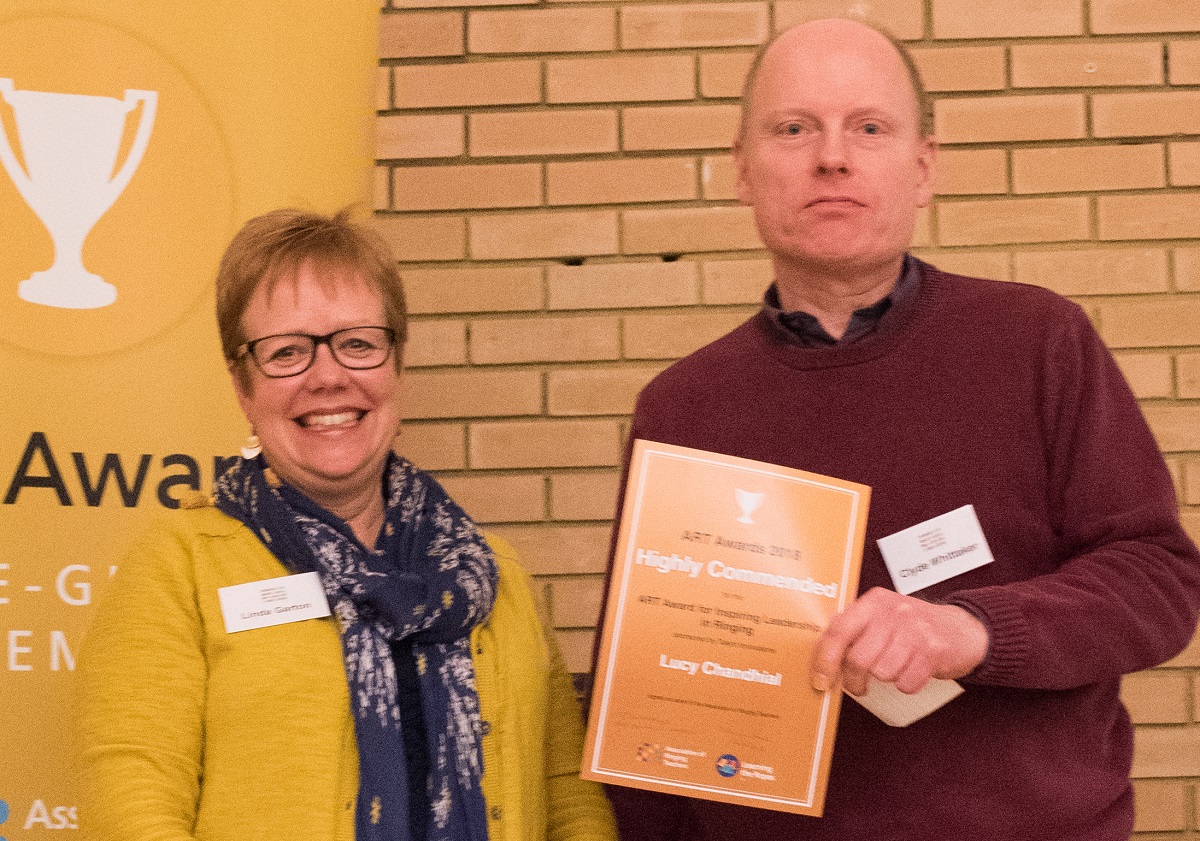