Yuka and her husband Keith moved to Taunton from Essex in the Spring of 2016. They came to live near St Mary Magdalene’s Church in the centre of Taunton. A major restoration project had just begun at this Church to replace the old ring with a completely new ring of bells. A lot of work was going on in the tower, and on this particular day the old bells were being lowered down from the tower. Yuka and Keith came to see what was going on and luckily began chatting to some Taunton Branch ringers, who had also come to watch.

They decided that they would like to learn to ring. As the St Mary’s band were not teaching any ringers, Yuka and Keith came to learn at Bishops Lydeard, at a learners’ practice which we run for an hour and a half before the main practice at 7.30pm on a Tuesday. They were also invited to come to an afternoon practice for two hours on a Wednesday at Hillfarance. This is a branch practice which is run both to help developing teachers and new ringers. It is open to anyone from our branch and surrounding branches. They were also invited to join a practice at Broomfield on a Monday evening where new ringers were being taught by the branch for that Benefice. Both Bishops Lydeard and Hillfarrance have simulators and these are used throughout the practices.Yuka chose to attend all three practices and was a very regular attendee.

As I had started to teach her at Bishops Lydeard, I continued to work with her at the other two practices. She began to learn on May 10 2016, and was very keen to learn, interested in the whole ringing world right from the word go. She also took advantage of the regular branch courses. These are run for three hours on a Saturday morning or afternoon, or on a Monday morning. The courses cover all aspects of ringing from handling to surprise minor and triples. There is usually a course on most subjects needed at the time at least once a month. Therefore Yuka took advantage of the handling and raising / lowering courses from the beginning. She then followed the courses through rounds, kaleidoscope ringing, call changes, the stages of plain hunt, Plain Bob Doubles until the present day when she has just rung Kent Treble Bob Minor.

Yuka started work on Learning the Ropes from the day she began to learn – May 10 2016. She made excellent progress through the five Levels:

Completing the scheme in just a year. Since then, she has continued to work on the Personal Achievement Log Book. She has rung about ten doubles methods, some plain Minor methods, learnt to treble bob and rung Kent Treble Bob Minor, learnt to hunt on 7 and 8, rings Plain Bob Triples, is learning Grandsire Triples and is beginning to hunt on 9. She has rung 28 quarter peals, ranging from Plain Bob Doubles and Reverse Canterbury Doubles to ringing the treble to triples. She has rung two peals, inside to Doubles (five methods) and tenor behind. I support this nomination because Yuka has made exceptional progress. She has worked very hard to achieve this and has made full use of the opportunities available.

We are particularly proud of Yuka’s achievements because she had only lived in this country for about four years when she learnt to ring. Thus she had to cope with the massive differences in culture from her home in Japan, the whole new world of bells and ringing, having to extend her English to learn the new language of ringing and to count in English.

One of the characteristics that has enabled Yuka to make such excellent progress is her ability to take responsibility for her own learning. For example, as soon as she was able to handle a bell independently, she would stand and practise her handling to improve aspects that she had been told could be improved; the same with raising and lowering; with kaleidoscope ringing she would pretend to be changing places with someone to improve her control when changing speed; with plain hunt she would practise the bell control needed on different bells.

Not only is she very good at working in the tower but she is just as good at working at home. Due to her difficulties with language, especially to begin with, once I had been through a method with her, she would make a rough copy and then go home to make a neat copy in her book which she now takes with her when she goes ringing. She would also ensure that it was fully learnt.

Other characteristics that have helped Yuka to progress are perseverance and that she is determined to get things right. She is very happy to keep working on something until it is very good. She is also excellent at listening and is always confident to ask questions to clarify the language or the subject. She is always keen to extend her knowledge.

As soon as she began to learn to ring she became fully involved in the ringing in the branch. She regularly attended the branch monthly practice, enabling her to gain experience on a variety of different bells. She also took part in the Branch Striking Competition and attended her first Association and Branch AGMs. She also took part in the Quarter Peal Month to raise money for the Association Bell Fund. Not only was she able to ring her first inside (Plain Bob Doubles April 4 2017), her first of Reverse Canterbury (April 7 2017), her first in two methods (Plain Bob and Reverse Canterbury Doubles, April 11 2017), her first of Minor (treble, Plain Bob Minor April 13 2017) and her 25th Quarter (April 28 2017), but she was able to ring so consistently well that she rang in two other people’s first quarters, one other person’s first inside and three people’s first in two methods. She also rang quarters in memory of Branch ringers who had died and a 91st birthday compliment to Her Majesty Queen Elizabeth II. She has regularly attended branch courses which have helped her to progress well and as soon as she was able she was very happy to come as a helper on these courses to help other ringers progress.

She is always very encouraging to the people learning on these courses and is a positive and friendly ringer. She is an excellent role model for those learning within the branch. She has continued to come to the three practices where she learned to ring. As well as developing her own ringing by, for example, learning a new doubles method, she is very happy to help other learners with rounds, kaleidoscope ringing, etc. She now, of course, attends the main practice at Bishops Lydeard as well. From the beginning, she has always been keen to help in whatever way she can. Very early on, she learned how to tie bells and has always arrived early at practices to help with this task. She has been involved in tower cleaning and the removal of the millions of flies that invade our towers every autumn.

At her Church, St Mary Magdalene, Taunton, she became involved in the fund raising that was still going on, and the preparation for the dedication of the bells. She was happy to undertake any task, whether preparing food, taking people on tower tours, helping on tower grabs, etc. Now that the new ring has been installed, she is a very reliable and valuable member of her band – which is quite small at the present time. She will be a key ringer in the development of this band. Ten new ringers have just been recruited and have begun to learn. Yuka always comes to their practice to help them with ringing rounds and to help tie and untie the bells.

Yuka has just rung her first two peals, inside to doubles – five methods, and cover to Grandsire doubles, and is looking forward to ringing more peals in the future. She has recently learnt to treble bob (on six bells) and is learning Kent Treble Bob and Little Bob at the present time. She is looking forward to ringing quarter peals of the Doubles methods that she has not rung to a quarter peal. She is now attending the branch eight-bell practice for plain methods to develop her eight bell ringing. She recently rang her first quarter peal at Wells Cathedral (treble to Triples). She has just begun to stand behind people who are learning call changes and kaleidoscope ringing and is gaining confidence in helping them. I am sure that she will develop this aspect of her ringing in the future. She is always keen to be involved and I am sure that she will be a very valuable member of the ringing community in the future. 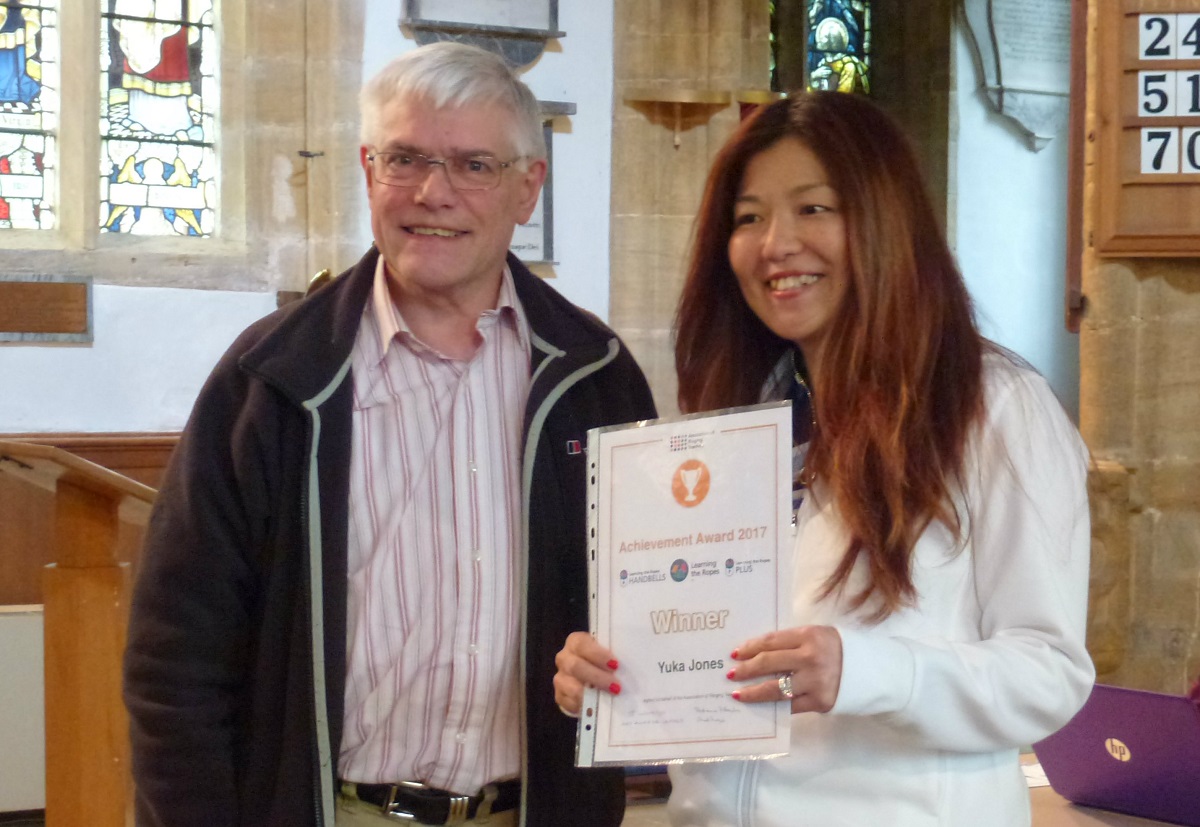